Lions and tigers and snarks, oh my!

Hunting Snark is a graphic exercise in agony … let's take a closer look at the Butcher, a crucial "rain-maker" in any Nonsense enterprise …

It's a fair cop, guv'nor! The Bellman, assisted by the Fellowship of the Snark, brandishes his clochetic truncheon at the Butcher's stoney noggin. Note further, my dear Watson, that a close reading of the text with a fine-toothed comb and well-knitted brow elicits the following facts:

Given …
The duncedness of this otherwise un-named crewmember is literally not-to-be-believed, a statement which itself is not-to-be-believed since it has not been repeated the requisite three times.
Given …
The sole internal property of this non-nonbelievable dunce is Snark.
From which …
The total epistemology of a dunce is a snark.
And therefore …
To possess a dunce is to possess a ready-made Platonic Ideal of a Snark — and in a very handy demi-godlike package too!
And therefore…
This dunce is no dunce, eh? QED!

So, our dunce is an imposter disguising himself as an Easter Island moia with an uncanny penchant for resembling the notorious French confidence-picturist and double-crosser, Eugène Delacroix! After some rough handling and quick bell-work, the so-called Eugène made the following (internal, hence epistemologically dunciad) statement:

"… one should not be too difficult. An artist should not treat himself like an enemy. Experience ought to teach us two things: first, that we should do a great deal of correcting, secondly, that we must not correct too much."

Proof positive and bob's your uncle! This man's an absolute diabolical numbskull, cunningly fitted out with all the French Polynesian deviltry necessary to hold two simultaneously opposing thoughts at once — the very conditions necessary for a Snark to flourish inside the old brain pan! Pseudo-neoplatonic skullduggery with alarming whiffs of a faux-phrenological sub-gnostic epistemological thing-um-a-jiggery — some sort of game's afoot! I could have had a job with NASA but I'm sticking it out with this snark business, I'm a brainworker!
Posted by Mahendra Singh at 7:57 AM 2 comments:

Apropos of nothing in particular … in his Journals, Eugène Delacroix once pooh-poohed maritime disasters and English literature, both of them subjects dear to my heart …

NB. I have increased the mineral content of Delacroix's head to compensate for his natural Gallic bouyancy and to highlight his affinity for impersonating an Easter Island moia.
Posted by Mahendra Singh at 11:17 AM 2 comments: 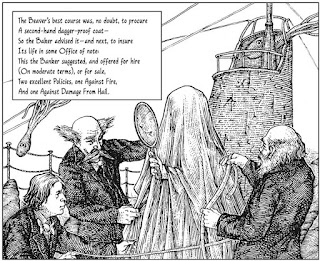 The illustration of these two stanzas has completely exhausted my remaining brain-worker abilities. Purchasing insurance for a lengthy sea voyage in the company of a declared homicidal maniac is standard naval procedure but fiendishly tricky for a landlubber draughtsman such as I. The dagger-proof coat which the Beaver is wearing was the crux of the drawing and easier by far, I decided to indicate its prophylactic function by delineating its essential nature: what goes on inside the dagger-proof coat, stays inside the dagger-proof coat.

Several of my readers have recently communicated to me that they don't "get it", that my written commentaries on the Snark contain "too many references to stuff we don't know about anyway", and finally, that's it all "too surreal". Success at last!

But seriously, big words make my head hurt too, that's why I became an artist. As a child I learned about these gigantic hurtful words and the small-minded hurtful people who use 'em. Whenever someone tries to make my brain hurt-hurt with jaw-jaw, I remember what Humpty Dumpty advised Alice on the subject of big, bad, scary words — "They've a temper, some of them - particularly verbs: they're the proudest — adjectives you can do anything with, but not verbs — however, I can manage the whole lot of them! Impenetrability! That's what I say!'

The egg speaks and having spoken, we obey! Yes, our new watchword shall be: impenetrably-clear.
Posted by Mahendra Singh at 6:00 AM No comments: 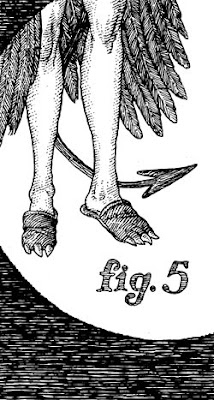 "The fifth is ambition. It next will be right
To describe each particular batch:
Distinguishing those that have feathers, and bite,
And those that have whiskers, and scratch.

The Bellman continues his Indictment of the Snark with the accusation of Ambition, tempered with the observation that all Snarks, like intestines or the Carolinas, are further divided into two parts*.

First, you have your biting Snarks, those goody-two-shoes who brush their teeth every night and limit their ambitions to lime jello with their salisbury steak dinner. Their purported bite is as gentle as the nibblements of curious goldfish upon a giggling baby’s bum, a mere trifle. They are the auspicious Snarks, the best of Snarks, the heppiest of Snarks, no ill wind will ever ruffle these li’l ainjils’ feathers.

Then there are those other scratching Snarks, addicted to back-room jobbery in used woolen underwear and race-track skullduggeries. They are Snarks fallen from grace, they loathe hairnets, electrolysis and the consumption of soup and cotton candy. We see an example of this latter Snark in the above illustration. He is lost in his own private pandemonium, shuffling to a distant armegeddon in his mismatched, postlapsarian slippers, forkéd tail and second-hand wings. He has been consumed entirely by the itch of Ambition, an old itch for an Old Scratch!

*An odd inconsistency which seems to have escaped most Snarkologists. The Bellman commences his Indictment by specifically stating that there are 5 Snarkian qualities. The feathered-whiskered speciation that follows the 5th Indictment is obviously another distinct, yet unannounced 6th Indictment. In light of the Bellman’s demonstrated inability to enunciate the number 6, might we conjecture that the number of this particular beast is 6? One's pursuers certainly cannot hunt what they cannot count, or so goes the Snark's reasoning. Using the Clochetic Rule-of-Three, we might even bandy about the number 666, a number of apocalyptic import which might well presage the lethal approach of the dreaded Boojum!
Posted by Mahendra Singh at 7:22 AM 4 comments: