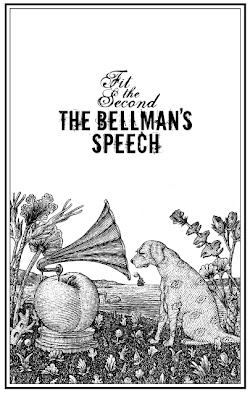 The Bellman's speech is of that particular British provenance yclept "fruity". Not so much "plummy" but rather … "peachy". If one removes the fuzzy skin thereof (the burr, so to speak) one is left with a nectarine. This fruit (spelled n-e-c-t-a-r-i-n-e but pronounced "stuffed cabbage") was the preferred nutrition of most cavemen and it was they who first domesticated the dog.

We see here a sample of that species, a young pup named Laelaps, who attends upon his master's fruity voice. And what does he hear? A sonorous mussitation which leaves no impression upon him at all, for, as Thomas Aquinas noted, dogs have no souls. Hence their proverbial high fidelity is but a marketing ploy.

A dog, a peach, a gramophone — after all these years, my own 3-piece jazz combo! At last, I can take a bath. And just in time too, my gin-driven ink-pen's almost run dry.
Posted by Mahendra Singh at 8:23 PM 2 comments: 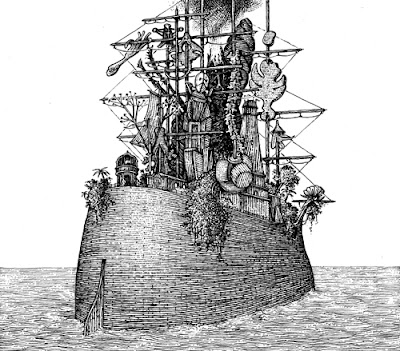 What is the final panel of Fit the First? A protosurrealist Narrenschiff patched together from semiotic pentimenti and oneiric palimpsets, a carte-de-visite of the Victorian ideal of the future, an artifact drifting down the estuary of the Mississippi … the Amazon … the Thames … the Congo …

"We said there warn't no home like the ol' HMS Snark, after all. Other places do seem so cramped up and smothery, but the Snark don't. You feel mighty free and easy and comfortable on her.

"But when we reach the sea we'll build a bigger ship! What great treachery that will be! Then we shall control every bathing machine and produce history as others produce plays. I, the Bellman, the wrath of god!"

The Bellman ceased, and sat apart, indistinct and silent, in the pose of a meditating Buddha. Nobody moved for a time. "We have lost the first of the ebb," said the Butcher, suddenly. I raised my head. The offing was barred by a black bank of clouds, and the tranquil waterway leading to the uttermost ends of the earth flowed somber under an overcast sky — seemed to lead into the heart of an immense darkness.

Links to this post
Email ThisBlogThis!Share to TwitterShare to FacebookShare to Pinterest
Labels: Photoreference, Protosurrealism, Snark, The Meaning of It All 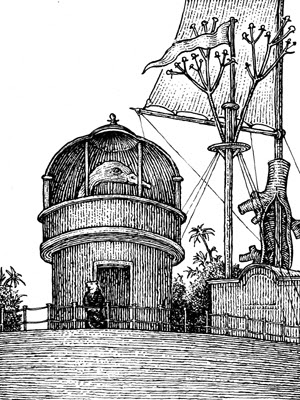 Declaimed by a drowsy Beaver at the stern of the HMS Snark as it drifts through the somnambulant equatorial swamps … simian caterwaulings and jackanape antics of the crew providing the needful soothing jungle lullabies … a siesta beckons … perhaps a postprandial charpoy, memsahib?

These snores, that I wish to outgribe.
So clear,
Their mimsy incarnations, which fly through the brillig air
I drowse a tulgey sleep.
Did I love a Boojum?

Posted by Mahendra Singh at 4:17 PM No comments:

Links to this post
Email ThisBlogThis!Share to TwitterShare to FacebookShare to Pinterest
Labels: Beaver, Charpoy, Etymology of "Snark", Stephane Mallarme 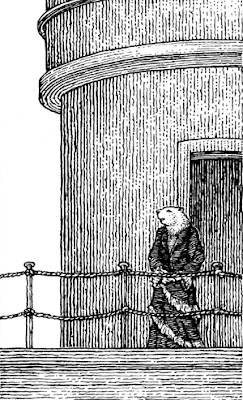 Words, words, words! There's not going to be any of 'em in this drawing and besides, the Beaver seldom knows what to say anyway. They make such a buzzing in her head … so she's popped off, outside on deck, away from that galoot of a Butcher and his loquacious cronies in the main salon. She's having a breath of fresh sea air, watching the Boots and the Bellman gammon the ship's bowsprit, thinking of absolutely nothing in particular.

She is, as they say, a tabula rasa. Just the thing for an artist who's short on paper. A few quick strokes of the pen and voilà! In place of a quotidian Castor Canadensis, we now have a charming ingenue recently out of finishing school. She has imbibed all the social graces necessary for the sporting companion of any High Church Anglicans bent on Snarkicide. No more riparian galactophagogery for this lady, she's wearing the galligaskins now and she's loaded for Boojum!

In short — nurture triumphs over nature — again! Huzzah for the tabulae rasae of this world! Besides, no one likes a palimpset anyway, those snooty, nefandous know-it-alls.
________________

NB. Special thanks to Doug H., a true Snarkologist, for furnishing me with sample pages from Peter Bowler's The Superior Person's Little Book of Words. Address all excess-word complaints directly to Doug. I am but a humble bystander, so fight your own naumachia, eh?
Posted by Mahendra Singh at 8:15 AM No comments:

Fit One, Pages Six and Seven as a Spread (What is Protosurrealism?) 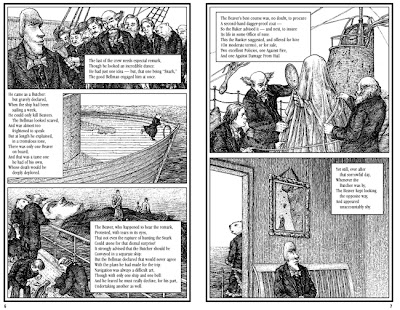 What was Surrealism? An escape into perpetual dreams, perpetual revolution, perpetual reinvention, perpetual renewal through the device of the unconsciousness playing peek-a-boo with the artistic imagination, yes, yes, all the 20th century neuroses say look at me — the Surreal! The end result? The 21st-century post-postmodern artist manqué, addressing his fussy postcards from the hipster Present to the slaughterhouse of the Past. So much diffident worrying over the langorous finessing of … absolutely … nothing.

Protosurrealism says fiddle-dee-dee to all of the above. An artistic movement destined to occupy its proper alphabetized station between Postmodernism and Surrealism, but with far less formalities, Protosurrealism is imbued with the breezy style of the perpetual flaneur who is always "hello-I-must-be-going", an artistic movement which appears before Surrealism but happens after it.

In short, Protosurrealism is the 21st-century application of 19th-century answers to 20th-century problems!

Example: the double-page spread shown above. A classic example of 19th-century realistic pen & ink textual illustration, a style where nothing is left to the imagination because there is no imagination involved. The artist draws what he sees, nothing more, lest he be late for his tiffin.

What else does the Protosurrealist see? He sees a library full of universal histories of dreams to draw upon. The fact that they emanate from his past yet are always unexpected is the essential quality of being proto-anything, much less surrealism. And so, the Protosurrealist mollifies the neurotic tendencies of the 20th-century past with an academic performance of 19th-century draughtsmanship, delineating the cultural artifacts of Surrealism with the same precision as a bowl of flowers in a still-life. He then takes a quick peek at the calendar to ensure that this is the year 2007 and voilà!

Protosurrealism! Our future buries our past in a perpetual present!
Posted by Mahendra Singh at 4:17 PM 2 comments: