Fit Two, Page 12, Panel 3 … the vocabulary of Bradshaw is nervous and terse but limited 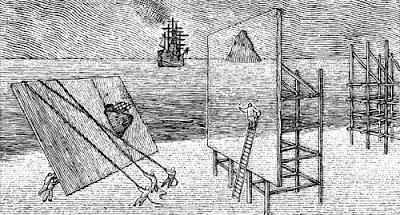 
NB. A tip of the ink-stained tuque to goofy, the proprietor of the wonderful and highly recommended Bradshaw of the Future, whose etymological assistance in our Snark hunt has been invaluable and fascinating. BOTF’s provenance stems from that " desperate wrong-doer " in Lewis Carroll’s " A Tangled Tale ". Any resemblance to railroad Bradshaws real or fictional , either living or dead, is purely coincidental on my part … dismiss it all as a false cognate destined to plague as-yet-unborn googlistas surfing the digital Bradshaw of the future. 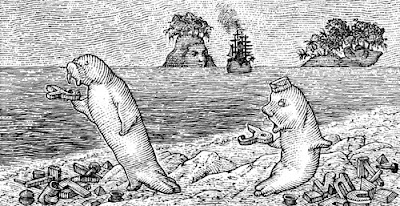 January 27th, 1832 is the birthday of Charles Dodgson, who passed away January 14th, 1898. The former preceded the latter, as befits an Eminent Victorian. Coincidentally, the English poet and author Lewis Carroll also died on the 14th, last Monday, 13 days before his birthday on the 27th, next Sunday.

As I have noted once before, this befits the author of The Hunting of the Snark, a poem whose composition was finished before it was begun.

Repeat the previous paragraph to fulfill the Clochetic Rule of Three and as a reward for your truthiness, you may have a slice of the birthday panel shown above. Delicious, eh? Some nice bits of Sir John Tenniel, a juicy morsel of Dora Maar (with a succulent Alfred Jarry center) and all of it garnished with the abraded glyphs of Oysters à la Alberto Savinio!

NB. Congratulations to the LCSNA and Messers P.L. Heath, J. Dixon and L. Carroll on their well-done and informative publication of "La Guida di Bragia". This work has been obliquely referred to before in these pages, during a meandering blather on Chirico and his brother Alberto Savinio. It seems that the heady scent of Anglo-Italian Railway-Surrealism is in the air … bravo!
Posted by Mahendra Singh at 4:08 PM No comments: 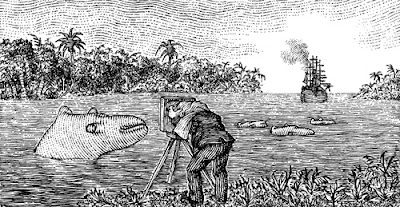 A quick-thinking Silesian photographer captures the rare spectacle of a school of puppetfish (Puppespielen bellmerensis*) disporting themselves in the mangrove-shoals of the River Spree while the HMS Snark heads out to sea on its final voyage … a wordless panel, as befits this week in which we observe the January 14th deathday of Lewis Carroll …

*This particular taxonomic, visual and surrealist reference must remain somewhat vague. But what a draftsman! Perhaps the best of the last century … you google at your own risk. NSFW.
Posted by Mahendra Singh at 5:00 PM 6 comments: 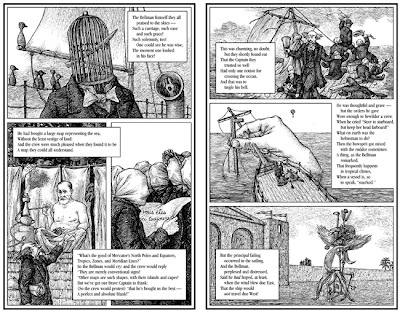 Shhhhhh, we’re hunting Snark! We have been tracking a magnificent specimen for over eight months and I think we have it cornered now, here in the thick undergrowth of pages 10 and 11.

Weapons at the ready, we plunge in! A brief, violent struggle and we re-emerge with our prey, securely trussed and in the bag! But wait, what’s this? Not a Snark at all, but rather — Henri Matisse, Hans Arp, Constantin Brancusi, Sigmund Freud, René Magritte, Théodore Géricault, Max Ernst, Giorgio de Chirico and Yves Tanguy! Not a Snark, not even a Boojum — just a plenum of dead Continentals reeking of turpentine, cigars and cheap plonk. We return to camp with our luckless prey, chastened and humiliated.

Later that night the quintessential protosurreal big-game hunter, Louis Aragon, waxes poetic on the pleasures of the chase as he sinks deeper into his cups …

"It was a time when, meeting in the evening like hunters after a day in the field, we made the day's accounting, the list of beasts we had invented, of fantastic plants, of images bagged."

We turn to him, a knowing smile upon our lips … yes, M. Aragon, why not? We roughly thrust him into our game bag alongside the others, those other exquisite corpses … the perfect bait for a Snark! Drink that new wine now, Louis!
Posted by Mahendra Singh at 9:58 AM No comments: 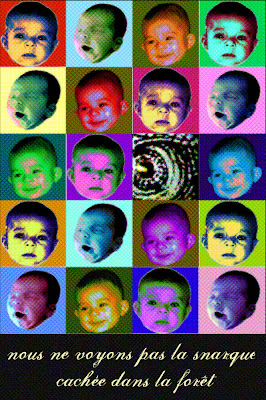 This New Year's Eve greeting from all of us at chez snarque will not only convey our best wishes for your future prosperity and happiness but more importantly, serve as a suprachromatic hypercognitive post-bibulative remedy, ie., a New Year Day pick-me-up guaranteed to open the eyes of even the most inert dionysiacs and bacchantes.

Special thanks to my 3-month old nephew, Leopold, who so kindly lent himself to the production of this garish, yet genuinely protosurrealist illustration. I have come to the conclusion that the true, genuine, singular and ineffable Meaning of the Snark can only be apprehended by a cheerfully small human being in a funny hat and plastic loincloth with an insatiable, drooling, passion for women's breasts. Nonsense is this young fellow's meat and drink!

Happy Snark Hunting in 2008, with forks and hope and railway-shares for all!
Posted by Mahendra Singh at 12:01 AM 2 comments:

Links to this post
Email ThisBlogThis!Share to TwitterShare to FacebookShare to Pinterest
Labels: auld lang snark, Leopold, The Meaning of It All
Newer Posts Older Posts Home
Subscribe to: Posts (Atom)