He who would make a Boojum of himself, gets rid of the pain of being a Snark 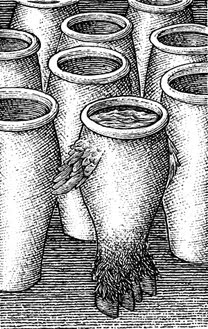 “Its flavour when cooked is more exquisite far
Than mutton, or oysters, or eggs:
(Some think it keeps best in an ivory jar,
And some, in mahogany kegs:)

One can never have enough of a jolly, good Snark hunt, don’t you agree? The fresh country air, the Protosurrealist scenery, the anapaestic hurly-burly of one’s fellow Snarquistadores baying after their prey, it all gives one such an appetite!

Naturally, no Snark hunt is complete without a bit of Jubjub taken al fresco whilst in the saddle. Cooked Jubjub is both palatable and highly nutritious, coyly hinting as it does to three-quarters of the Classical Four Elements : earth in the form of mutton, water in the form of oysters and air in the form of the eggs of some unspecified bird. The fourth and final element of fire could easily be supplied by the judicious application of some spicy condiment or chutney.

If Lewis Carroll were alive, he would certainly agree with you when you assert that this poetic reference (a milestone in Victorian Table Verse) to mutton, oyster and eggs makes these gustatorially implicit items into allegorical symbols of themselves. This is a subtle point indeed, so subtle that I’ll skip over the boring old meat-and-two-vegs-reasoning and head straight for the more exciting porto-and-coffee-conclusion, as it were.

Symbols which specifically refer to only themselves are called "reality" by certain smarty-pants metaphysicans. These sort of crackerjack thinkers would point out that the mutton-oysters-eggs-thingy is subset within a Jubjub which is itself subset within the ivory jars and mahogany kegs, the latter containers being diametrically opposed in coloring, another indication that Something Fishy Is Going On Here.

Unfortunately, Lewis Carroll is not alive and hence unable to agree with all of the above. In fact, his lack of Reality makes him feel a bit unagreeable and even disagreeable with all this alimentontological twaddle you’re going on with. In fact, he’s feeling rather queasy and unsettled with the whole business and my goodness, I think that he’s going to faint! Quick, call the management while I relieve Mr. Carroll of the weight of his wallet upon his chest.

Poor fellow, struck down in his prime and not a moment too soon! It must have been the Jubjub — look at the expiration date! Good lord, man, this Jubjub’s nearly 137 years old! Why, it’s not even second-grade-fresh! Slow food, indeed! Criminally slow, I’d say!
Posted by Mahendra Singh at 10:25 AM 6 comments: 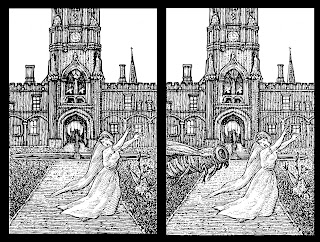 Apologies for the delayed posting … this is a
repeat posting anyway as I am currently
immured at an undisclosed location,
ie., deadlines …

“But it knows any friend it has met once before:
It never will look at a bribe:
And in charity-meetings it stands at the door,
And collects — though it does not subscribe.

What brings all this to mind is the scandalous Case of the Missing Bribe, an affaire snarque which was first brought to my attention by the eminent Czech poet and Snark translator, Václav Z. J. Pinkava. It was he, who in discussing with me the above stanza regarding the Jubjub’s sordid personal habits, first detected the spurious substitution of the word bride with the word bribe in most internet texts. I shall watson Václav’s holmes thus …

"In the text I first based my translation upon, some years ago - the second b of bribe had become its mirror image, bride. It serves me right for working in IT, I should not have relied on electronic sources. I had also used Gutenberg, in 2005, so the Origin of Speciousness is now lucidly clear. The consequences of such a tiny but undetected 'program bug' are impressive. Snarkologists might find it curious that this shows up in the phrase "it never will look at a bribe" — nobody did look!"

Both Václav and I had run afoul of Gutenberg.org's tainted source copy! Shocking isn't it, dear reader, to discover that a certain someone is type-setting his raw copy from an internet site! Alas, I had already misdrawn the soiled stanza with its sordid Bride, the results of which you see above on the left. Fortunately, Václav is not only a poet, but a brainworker too, and his fertile mind was teeming with a scintillating maelstrom of myriad illustrative remedies à la Hedly Lamarr!

"Anyway, I may have a solution for you — or at least a talkaround … the Bride-as-Bribe is of course a theme reminiscent of classical Knight and Dragon stories, where the King offers his only daughter as a draconian bride-bribe to save the royal city from ruin. Rather a Grimm prospect. Tom Tower (the Christ Church background of the above drawings) looks rather like a hidden dragon to me, in your picture, with the gate as the mouth and the windows above as the eyes.

The b-d transform is, as hereto indicated, reminiscent of the two "eye" Tom Tower windows, with a bit of buttressing masonry as the uprights. Not unnaturally, then, given St George as the English patron saint, that this should be an undercurrent in any truly English literary endeavour. And, after all, on the blank part of old maps the inscription was either Hic Sunt Leones, or Hic Sunt Dracones, and so the brave Bellman has taken his crew not only into Snark country, but into Lion and Dragon country, too, just by using a blank map.

The Jubjub bird is, like most birds, not a creature of the KNight and so is much too unchivalrous to pay attention to any brides-as-bribes, lest the respective dragon-groom challenge the interloper to a fight. If Miguel de Cervantes made Don Quixote mistake windmills for Giants, then Lewis Carroll's opiated view of Tom Tower as a dragon is quite acceptable to me."

After ruminating upon Václav's advice, I finally roused myself from my usual torpor to remedy the whole unfortunate situation with an amended drawing, seen above on the right. With this hasty addition of a large and angry honeybee, the Bride had Bee-come a Bribe and all was well again — for now, at least!

For me, the entire episode was a painful reminder of the subtle dangers lurking in even the most innocuous Carrollian verse (and the necessity of actually reading what I’m drawing, eh?). However, in further correspondence with Václav, I discovered that his own Czech translation had also run afoul of various linguistic sandbanks, which he had navigated with some considerable panache …

"Czech’s visual compactness is a side effect of diacritical marks, invented by Jan Hus, the Protestant martyr who was burnt as a heretic in Constance — albeit not for his orthography. This diacritical scheme is a great idea, it makes Czech far shorter to look at than Polish, a related language. However, the alphabet has a Carrollian 42 letters, including one dipthong 'ch', pronounced like the word Loch.

I have indeed maintained and in fact in some places enhanced the eccentricity of the text, in Carrolian style. This has led to no end of controversy. Czechs, like the French, have an institution to guard purity of language, and they are averse to anyone taking liberties, such as putting in one or two portmanteau words when the rhythmic straightjacket got too tight.

Anyway, let those Czech translators who come after me make do with the plainer versification they long for. It is often annoyingly inescapable to me, when I read Carroll's seemingly plain-English Snark, how he plays with multiple meanings in simple words (or at least I think he does). For example, in the Second Fit — "Other maps are such shapes, with their islands and capes!" — makes me think of a personified Map wearing a cape! Another example of a bit of fun; in the Barrister's dream, I took a slight liberty with the translation of:

"The fact of Desertion I will not dispute;
But its guilt, as I trust, is removed
(So far as relates to the costs of this suit)
By the Alibi which has been proved."

It occurred to me that an Alibi literally means that the accused was somewhere else at the time, which, if one is being accused of desertion, can be interesting, if negated. So I translated this partly to say that the Alibi is proven by there being none, i.e. the pig was not somewhere else. As to the cost of the "suit", I hope there was no "gilt" implied; well at least it has been removed, and especially so in translation.

On the repeating mantra "They sought it with, etc.,", I had a great opportunity to use a double meaning in Czech, because "mydlit" (to soap) someone is an idiom for beating them up, for reigning blows upon them mercilessly; so I left out the smiles part and emphasized the soap, literally: "(they) confounded it with the way soap soaps/beats up." It has a nice euphony and alliteration about it in the Czech line. There is also an idiom to soap someone's stairs, i.e., to assist their downfall.

I initially surmised that I had to be very free with the translation when it came to the Snark's fondness for bathing machines, and their adding to the beauty of scenes, as no Czech reader would have a clue what a Victorian bathing machine is. No coastline here! So I took another angle on that, mentioning showers and (car-style) wash-machines, and the adding to the beauty of scenes being open to doubt because the view is cleaner but also drop-speckled. In the end I found a way of translating it as "wheeled bathing cabins" and left it up to the reader to research what they were. It seems to me that the assertion at the very beginning of the poem, "Just the place for a Snark", is best explained by envisaging numerous bathing machines liberally perched upon chasms and crags!

In Czech it is impossible to maintain all the tradesmen starting on B, or any one letter, without changing them. Incidentally, why is everyone convinced they had names beginning with B, when they are descriptions, and one in particular very oblique — the Bonnet Maker?

One of my greatest annoyances was how many Czechs have been led astray by their clichéd schooling, which mentions the Snark in the 3rd grade despite there not being a Czech translation until now. Accordingly, they consider the Snark to be predominantly shark-like, and so they wanted it translated into some Czech soundalike (czech for shark being Žralok pronounced zhrullock). I want the Snark to remain a Snark — I just added an accent on the á. I do rather wish Carroll had named him Xnark, though."

I do hope that you've have enjoyed this lengthy but detailed exposé into the hitherto concealed inner workings of the international Snark trade, both visual and linguistic. Sure, there’s plenty of glamour and gorgeous women and fast cars and forks and hope and all that but that’s 19th century British Nonsense poetry for you, isn’t it? It will all end in tears anyway …
___________

NB. Václav is a fine poet as well as translator and his verse is worth reading, as is his father's. Václav crafts his words with hope and care, as befits a truly talented and steadfast member of the Fellowship of the Snark! Bibliophiliac Snarkniks (and you know who you are) can find his Czech Snark readily available here and here and here. What I tell you three times, eh?
Posted by Mahendra Singh at 8:00 AM 2 comments: