The Color of Three 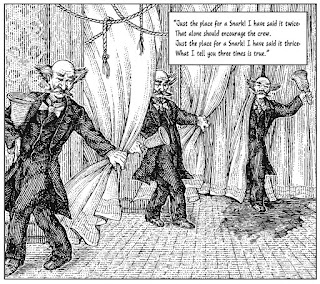 The second panel of my Snark GN … self-explanatory, I should think. The Quebecois, tripartite motif is reinforced by the element of stealthy moisture. Both the fleur-de-lys and water (and what is the color of this water? It is the color of water) are attributes of monarchy, the former being an attribute of the ancien regime and the latter being referred to by the Sun King in his infamous pronouncement: apres moi, le deluge.
The Bellman is given to royal diktats of this sort which he legitimizes with a Christian, trinitarian strategy. The hunting of snarks is not peasant's sport, it is the sport of kings. Pshaw to the separation of church and state that was once so ballyhooed by our American cousins. What ho! saddle up, the last man afield is a prole! Ditto for the women, eh?
Posted by Mahendra Singh at 11:03 AM