Fit the Fifth, Page 36, Panel 4 … Jubjub, at first though sweet, bitter ere long back on itself recoils 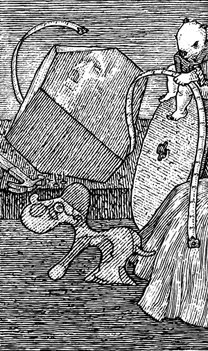 “You boil it in sawdust: you salt it in glue:
You condense it with locusts and tape:
Still keeping one principal object in view —
To preserve its symmetrical shape.”

Our Hunting of the Snark resumes its Jubjubian subplot for yet another stanzel; Lewis Carroll regales us here with a spirited description of a Jubjub being tortured by a variety of methods whose diabolical ingenuity and inventive discomfort seem uncomfortably redolent of an impromptu herd of schoolboys possessing the usual cretinous surplus of high spirits and moral pygmyism.

Carroll’s closest associate, C.L. Dodgson, would have been quite familiar with such goings-on, both as grim memories of his own public-schooling at Rugby and more to the point, as part of his quotidian duties as a maths tutor at Christ Church, where we can have little doubt that the vast majority of his students possessed a similar burning enthusiasm to make things hot for all creatures great and small.

This implicit connection twixt torture and mathematics must have troubled Dodgson’s gentle soul; no doubt he shared his unease with the more worldly Carroll, who then incorporated all of the above into this snappy bit of verse which we are chewing over right now.

In his Annotated Snark, Martin Gardner briefly discussed Prof. John Leech’s observations upon the mathematical implications of this stanza. Leech noted that by substituting locuses (or loci) for locusts, and tape measure for tape, one is then provided with the rudimentary instructions for the sawing and gluing together of the various wooden rods necessary for the skeletal framework of a regular polyhedron.

One can have little doubt that these instructions for the construction of a geometric solid would have provided Dodgson’s students with some considerable discomfort! From their 19th-century British discomfort they would have slipped, inevitably, into the very graphic slough of a fullblown 16th-century German melancholia, with all its attendant polyhedronal tortures!

Huzzah for the symmetrical mathematical-moral shape of things in our cozy world of boiled and salted Jubjubs-cum-schoolboys, ‘tis all very well thought out, Messers Carroll and Dodgson! The morally high-minded reader can chuckle appreciatively at all this, the rest of you just rattle your jewelry in a passing gust of old-fashioned schadenfreude.

NB. I must draw your attention, my dear Watson, to the curious incident of the dog barking at the moon. It is a Catalonian, 20th-century dog prone to bouts of selenic melancolia originating from its anachronistic exile to Nuremberg.
Posted by Mahendra Singh at 6:30 AM