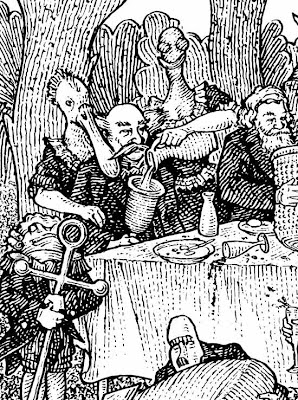 We already had a rousing go at Dante Alighieri a while back, using good ol’ Witold Gombrowicz in his customary role as the curmudgeonly cudgel of Modernism:

"Dante was reciting his epoch, but the epoch was also reciting, and the poem is, so to speak, a double platitude, the poet simply recited what was already being recited. Something like those Sunday discussions of soccer by people gathered in bars and coffee houses. Do they really care about soccer? Not in the least. … Humanity glides along the worn ruts of articulation. An empty poem, which exists in defiance of reality and almost as if to spite it!"

Although Carroll loathed sports, both Dante and he did share a similar modus operandi; constructing vastly complex and ultimately nonsensical multiverses with Trinitarian proclivities …

The Inferno goes along nicely with The Hunting of the Snark, the Purgatorio makes a handy accessory to Through the Looking Glass and the Paradiso looks so much better with Alice in Wonderland rakishly topping it off.

A mighty prosodic fortress indeed, and all of it, Dantean and Carrollian alike, firmly centered upon the secret axis mundi and prosodic omphalos of all great poetry, love.
Posted by Mahendra Singh at 6:30 AM