The Machines rule, their word is law and their rendition of The Hunting of the Snark is nonsense of the highest order — nonsense without a soul!

The following stanza of the Snark has been submitted to the Machine-Translation Tractor Beam:

After several passes through the force fields of the Machine-Human Semiotic Interface, we are left with this bit of faux-Zen, quasi-Brownian prosodic motion:

They are not the period of diffidenza;
But they have, the end to make the material
so that the controls of the very direct concept
of this good one for the sea in the past
deciding to that they happen and
this ku acoustic of signaler is the turbulent flow.

The human once known as Théodore Géricault, along with the semiotic residue of his Raft of the Medusa is now fed into the Machine … 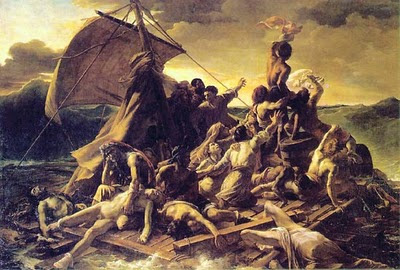 Then once more, the Machine Force Field is lowered upon this hapless relic of French Romanticism … leaving us with this ugly artifact of pure visual nonsense …

So beautiful … so dangerous … The Hunting of the Snark in the Age of the Machine!
Posted by Mahendra Singh at 6:30 AM

Email ThisBlogThis!Share to TwitterShare to FacebookShare to Pinterest
Labels: Nonsense, Raft of the Medusa, Théodore Géricault