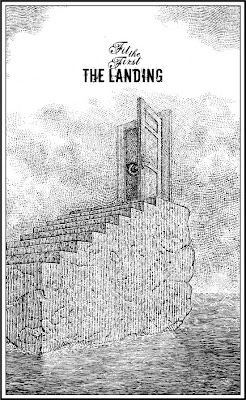 After spending ten weeks focusing upon each of the Snark Hunters in their turn, it is time to turn our attention to She Who Must Be Obeyed* … yes, the Snark itself!

The Encylopedia Snarkiana defines Snarkus Snarkensis as a colorless, odorless, tasteless, soundless and bodyless entity designed to fluster illustrators with its annoying penchant for self-contradiction and nonexistence.

The Hunting of the Snark defines a Snark in its usual evasive manner, employing an impressive array of half-truths, demi-truths, pseudo-truths and mini-truths. We shall examine these laughable attempts at Factualism at greater length over the coming weeks, but for now we present you with the above inky approximation of a Snark as a sort of semiotic apertif designed to whet your appetite for something or the other.

This drawing of a sketch of a xerox of a fax of a Snark is the very drawing with which my version of the Snark commences, the notorious frontispiece to Fit the First, of which the author, Lewis Carroll, once complained that this was not at all the sort of landing he had in mind.

Very well, we will have our little jokes at the expense of the Admirable Carroll but when one is commencing a hunt, it is customary to inform one’s fellow hunters of what it is exactly that they should feel free to aim at — we must eschew the unorthodox tactics (effective though they are) of the Dick Cheneys of the sporting set!

Indeed, there was much chewing of pencils and tugging at fetlocks on this artist’s part as he contemplated this particular dilemma, he endured sleepless nights of carefully feigned slumber as he concealed from his wife the mental turmoil which so agitated his overheated mind.

In the end, bereft of inspiration, the above drawing was hastily tossed off in the hopes that no one would notice its lack of meaning. The management apologizes in advance for any dashed hopes on the reader’s part, no doubt so many of you had eagerly seized upon this image, excited at the hopes of discovering the Snark’s true identity at last, after 134 years the Holy Grail of Snarkology would be in your sweaty grasp at last — and then you gasped aloud, oh, the horror! the horror! — you cried out in your despair! — the Snark … it is Eye!
_________________

*Without belaboring the point, I think it’s clear to any happily married man that the Snark is a she, a revelation of sorts which came to me as I was attempting to move our entire domicile six inches to the left to improve the television’s imperfect reception at the behest of a certain someone.
Posted by Mahendra Singh at 8:52 AM

Email ThisBlogThis!Share to TwitterShare to FacebookShare to Pinterest
Labels: The Landing, The Snark