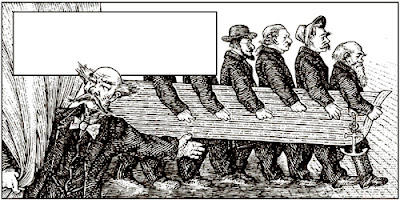 The crew was complete: it included a Boots —
A maker of Bonnets and Hoods —
A Barrister, brought to arrange their disputes —
And a Broker, to value their goods.

From right to left (semitic justification has been applied for at the appropriate government agencies):
The Boots, AKA Charles Darwin
The Bonnet, AKA Friedrich Nietzsche
The Barrister, AKA Martin Heidegger
The Broker, AKA Eric Satie
The Bellman, AKA The White Knight AKA Sir John Tenniel

The observant reader (I use the singular because so far that is the sum total of my reader) may detect a pattern here. Stella Snead's absence has been noted by the sole reader, to whom I had to soulfully admit that Snead did not meet my rigorous criteria for inclusion into the hunting party of the Snark (all members must have been alive during Carroll's lifetime). The sole reader is not only acutely observant, remarkably well-read and well-seeing, but even better, quite good looking.

If memory serves, Satie enjoyed creating miniscule models of houses shaped out of lead, which he kept in a cabinet in his home. He would periodically advertise these houses in the local newspaper — making no mention of their actual size — and would take great delight in ushering the prospective home-purchaser into his parlor, and there solemnly presenting him with the unexpected lilliputian house. One can imagine Nietzsche's reaction to this — the Gallic humor! the German silence!

Satie's aptly-named piano piece, Vexations, is an ideal soundtrack for la vie snarque, and so here are several recent performances of it, really worth a listen.

Posted by Mahendra Singh at 2:55 PM No comments: 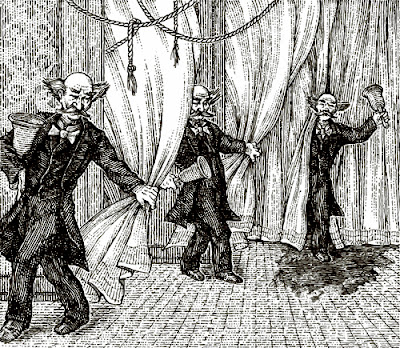 Self-explanatory, I should think. The Quebecois, tripartite motif is reinforced by the element of stealthy moisture. Both the fleur-de-lys and water (and what is the color of this water? It is the color of water) are attributes of monarchy, the former being an attribute of the ancien regime and the latter (l'eau) being referred to by the Sun King in his pronouncement: apres moi, le deluge. The Bellman is given to royal diktats of this sort which he clearly legitimizes with a Christian, trinitarian strategy. The hunting of snarks is not peasant's sport, it is the sport of kings. Pshaw to the separation of church and state that is so ballyhooed by our American cousins. What ho! saddle up, the last man afield is a prole!
Posted by Mahendra Singh at 9:34 AM 2 comments: 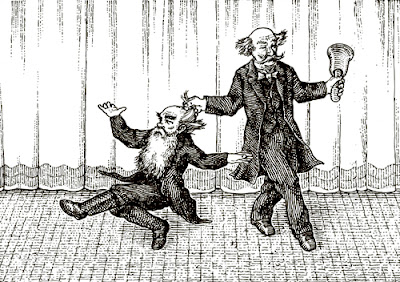 "Just the place for a Snark!" the Bellman cried,
As he landed his crew with care;
Supporting each man on the top of the tide
By a finger entwined in his hair.

A theatrical start, and one that I hope Lewis Carroll would have appreciated. The unreality of the stage (compounded by, in this instance, the unreality of all things internet) is the best starting point for a Snark hunt. The mentally astute reader will note that the Boots is Charles Darwin (definitively responsible for the unreality of god) and that the Bellman is the White Knight from Through the Looking Glass. The more astute reader will know that the White Knight was a self-portrait (rather idealized and verging on the unreal) of the cyclopic Sir John Tenniel, illustrator of Through the Looking Glass. The most astute reader will remember that the Boot's pose is that of St. Anthony in Grunewald's Temptation of St. Anthony, a compelling depiction of the unreal visions created by the unreal nemesis of an unreal deity upon a real believer. What I tell you three times, eh?

Posted by Mahendra Singh at 9:12 AM 2 comments:

Fit the First, Page One

We artists have an obligation to provide employment to our equally impecunious academic brethren and I am determined to create my Hunting of the Snark in the spirit of fraternal thing-um-a-bob with the above-mentioned whats-is. Every page, every panel, every jot and tittle of my Snark will provide much-needed gainful employment for all graduate students and other itinerant savants (including but not limited to shut-ins, the congenitally idle, involuntary wards of the state, newspaper arts-page gad-abouts, etc).
Huzzah for the sacred groves of academe! The satyriac professors shepherding their flock of semiotic yet shapely grad students armed with finely-tuned stipends! You can rely upon my Snark for much gainful head scratching and a bounty of fruitful hair-splitting. Therefore, gentlemen! ladies! I present to you the first page of Fit the First. Your clue: ontology recapitulates phylogeny! Go forth and discuss amongst yourselves: the Snark is eye and we are treading in deep waters, the salty whiff of existentialism is in the seaside air. Smells like late-Victorian bathing-machine teen spirit to me. 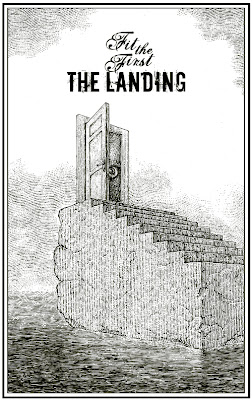 Posted by Mahendra Singh at 6:12 PM No comments: