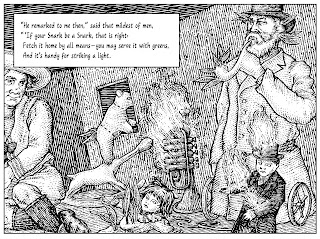 The flavor of Snark, being animal, vegetable and mineral all at once, lends itself to all manner of cookery and here at Chez Snark, we dine on snark in every season and think nothing of it — it is the original slow-food and since the Snark is a beast easily found everywhere, its carbon foot print is the lightest imaginable! The following recipe perfectly captures the flavor and ambience of freshly-caught snark in its South Asian incarnation — you won’t be disappointed!South Indian Snark Fry• Fetch to home by any means possible (palanquin, scooter-rickshaw, forkéd stick) approx. 2 lbs. Snark fillets. If your fishmonger has no Snark, use any skinless, boneless, firm-fleshed fish fillets such as tilapia, cod, catfish. Perfectly fresh soft-shell crabs are widely considered to be the best approximation of Snark.• 2 tablespoons of ground coriander, 1 teaspoon of salt, 1 teaspoon of ground black pepper and as much ground red chili (cayenne) as you care for• A half-cup of grated onion• 3 cloves of garlic, grated• Two tablespoons of vegetable oil• Sufficient flour to dredge the fillets, a mixture of one-half all-purpose plain flour, one-half corn mealCombine the spices, grated onion, grated garlic and oil in a non-reactive bowl, then place the snark fillets inside the bowl, making sure that the fillets become thoroughly coated with the mixture. Let stand (refrigerated) for at least an hour or two. When ready to cook, gently dredge the coated fillets in the cornmeal-flour mix, taking care that the onion & spice mix remains on the fillets. Fry them in a pan with sufficient oil at high heat. The crust should be golden brown and not at all greasy. Serve immediately.You may indeed serve it with greens such as a simple garden salad. You may also fetch it home in the company of a thoroughly chilled crisp India pale ale. You may even use it for striking a light along with some lime pickle. But if your Snark fry be a Boojum, then just softly and suddenly vanish away … and let that Boojum do the washing-up for a change!Onward, with forks and hope — to the table!

NB. Readers may also find my recipe for Assamese Snark Curry of interest. True Carrollians love their curry!
Posted by Mahendra Singh at 9:50 AM No comments:

If necessity is the mother of invention, then snark hunting is its uncle

Yes, that’s all very well, dear reader, aren’t you clever to have remembered that Lewis Carroll’s doppelgänger, Charles Lutwidge Dodgson, was named after his dear uncle, Robert Wilfred Skeffington (gesundheit) Lutwidge.I also know that you made arrangements to force your attentions upon some local chorus girls and impress upon them the coincidence of the Snark’s origins; how Lewis Carroll commenced that poem’s composition in the town of Guildford on July 18, 1874 — the precise time and place where Dodgson himself was playing the role of "dear uncle" whilst nursing a terminally ill, tubercular nephew.But there’s more. While going through an old dustbin the lid flew off and you emerged clutching the proof positive of an avuncular trifecta : a dog-eared account of dear uncle Robert Wilfred Skeffington Lutwidge being fatally wounded by a lunatic armed with a large rusty nail, the point of which had been recently sharpened in anticipation of its lethal purpose. (When the English go nuts, they stay really focussed, eh?)Enough of these dear uncles and these dear readers! It's this defective pen of mine, it will not draw uncles properly — curse these cut-rate penmongers! This hand-me-down drawing of a telegram of a newspaper clipping of a photograph of a simulated second-hand uncle will have to do for now … at least until that time when all our dear uncles, like laughter, are doomed to disappear.
Posted by Mahendra Singh at 10:51 AM No comments: 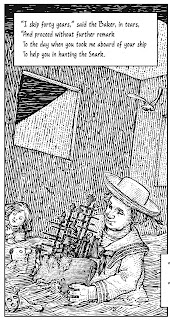 The story so far … there once was a Snark … but it will be a Boojum, alas!The Baker is suffering from what we now know to be angst. Once upon a time we would have pinned the label of big fat crybaby upon him but these are dangerous times for thought-criminals. Boojum-angst was first used as a legal defense by the Baker’s legal counsel, the Barrister, AKA Martin Heidegger, in his seminal brief (naughty boy!): Sein und Zeit. He excused the Baker’s regression into a second childhood with the then-novel defense of angst, which he explained as an objectless and generalized dread occasioned by the growing presence of Nothing. The boojum, a nonexistent being, fit this description nicely and the Barrister won an acquital for his client on the grounds that he was an idiot anyway. We shall see more of the Barrister’s weasel-skills in Fit the Sixth.From whence comes this fashion to label all things boojum in the German language? Angst, schadenfreude, strafe (straffen), weltschmertz — all of ‘em teutonic and hardly a laugh in the lot. May we quote the poet Heinrich Heine on this subject :"… the Germans have the curious custom of always attaching a thought to whatever they do.”Schnitzel for thought, indeed! All it needs is this mustard-like condiment, from the cupboard of the American illustrator, Edward Gorey :"I have a dumb theory that a creative piece of art is only interesting if it purports to be about something and is really about something else."Milord, the defense rests in its usual, pretzel-like position. Like the Baker, at play in the ontic fields of the lord, to all the above charges of unlawful boojumizing and multiple neologizing we shall plead : ignorance, madam,pure ignorance. Or in the very best Clochetic-cum-Orwellian manner : ignorance, madam, double-plus pure ignorance.
Posted by Mahendra Singh at 10:13 AM No comments: