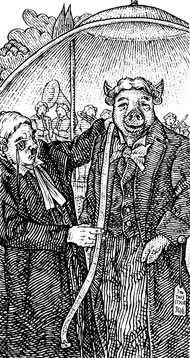 “The fact of Desertion I will not dispute;
But its guilt, as I trust, is removed
(So far as related to the costs of this suit)
By the Alibi which has been proved.

What’s this, the Judge sputters! Sanity Clause? You can’t fool me, there ain’t no Sanity Clause! Exactly, milord, 'tis the perfect Christmas Alibi, the Snark replies!
Posted by Mahendra Singh at 6:30 AM No comments:

Email ThisBlogThis!Share to TwitterShare to FacebookShare to Pinterest
Labels: The Barrister, The Dreadful Punster, The Marx Brothers 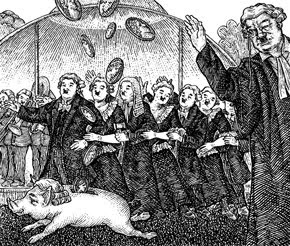 “You must know —” said the Judge: but the Snark exclaimed “Fudge!”
That statute is obsolete quite!
Let me tell you, my friends, the whole question depends
On an ancient manorial right.
“In the matter of Treason the pig would appear
To have aided, but scarcely abetted:
While the charge of Insolvency fails, it is clear,
If you grant the plea ‘never indebted.’

The coin of the realm these postlapsarian days seems to be the last and greatest bastion of that very same unblinking faith in the unseen which characterized the salad days of the Middle Ages. Nowadays, most governments print and mint the stuff by the bushel with nothing more to back it up save a vague promise of an tattered xerox of a smudged fax of a unfocussed photograph of a crude drawing of a shifty rumour of someone, somewhere, actually doing something of value sufficient to prop up the coin in question.

However, in the Nonsense world of Lewis Carroll, and more to the point, in the Barrister’s Dream of the Hunting of the Snark, we find a refreshingly hard-nosed, Victorian mentality vis-a-vis whatever coin of the realm you might be trying to palm off on the locals. Messers Carroll & Dodgson had a healthy respect for money, struggling as they did to support various spinster sisters (AKA spinsisters in certain musical circles) and even the odd charity case on an academic’s meager salary. Hence, it is with heavy heart (and light kidney, groan) that they would have regarded the Snark’s pooh-poohing of the charge of Insolvency on the part of his piggish client.

The Snark’s defense of "never indebted" must come as a vindication of sorts to the Pig, whose depiction here as a piggy bank will no doubt amuse the simpler-minded reader. Giant, auspicious pigs with financial and psychic clout were once all the rage in certain mythical, Celtic quarters and such cheap visual sleights-of-hand are this artist’s inky stock-in-trade.

But the Barrister would also like to draw your attention to the chorus line of Martin Heideggers who are shimmying seductively to the delightful tune of When it Rains, It Rains Pennies From Heaven. It’s a comforting melody composed to allay the Judge’s crypto-Calvinist suspicions of any rumored pay-offs emanating from Upstairs and to also lull the Jury into contemplating the possibility that the Pig isn’t responsible for his actions since Society Made Him Do It Anyway (a legal defense employed, curiously enough, by the real Martin Heidegger).

But what’s this, the Judge sputters in dismay! These are no pennies cascading into the Heidegger-Pig, these are — gasp! — shekels! Even more suspicious, these are Tyrian shekels! These notorious coins, adorned with the likeness of the Phoenician god Melqart or Baal, were the favored form of payment for the most infamous act of Treason ever done, yes, they were the fee earned by Judas when he threw his lot in with you-know-who — Beelzebub & Assoc., Esq.! This same Beelzebub, associated in Jewish legal circles with the afore-mentioned Baal (and both of 'em B-Boyz, eh?), has also been seen in company with that pesky Lord of the Flies so memorably depicted by William Golding as a big, fat pig’s head impaled on a stick for the amusement of a crowd of hooting under-age lager louts on holiday.

To sum up, milord and dear readers, this tragic descent of a benevolent, well-moneyed Celtic pig into a satanic, treasonous Judeo-Christian pig is no mere question of fudge, as my learned Snark colleague would have it. No, it is even worse, it is a prime example of Gresham’s Law — bad pigs drive out good!

The defense rests in a crouched, fetal position, as ever, till next week …
Posted by Mahendra Singh at 6:30 AM No comments: 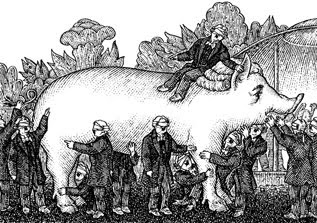 The indictment had never been clearly expressed,
And it seemed that the Snark had begun,
And had spoken three hours, before any one guessed
What the pig was supposed to have done.
The Jury had each formed a different view
(Long before the indictment was read),
And they all spoke at once, so that none of them knew
One word that the others had said.

Page 42 of any work of literature will always be redolent of the highest Carrollian vibes imaginable; to wit, the well-known mojo of the Puissant Number 42 is at this very moment shedding its potent tantric vibe over the above drawing, a drawing dedicated to the ubiquitious situation of everybody speaking at once so that nobody knows what’s being said.

The late, great Strother Martin (probably one of the Heiddeger Martins from Heidelberg, back in the old country) once noted, in a similar situation involving some other dunderheads messing about with the law, phenomenology and life’s problems in general, that what we have here is a failure to communicate. But how to illustrate such a situation without in turn failing to communicate one’s own self? How can we avoid the relentless, downward spiral of miscommunication, and distrust which so plagues modern youth?

Such logical intricacies were a sort of busman’s holiday for a certain class of Hindu (and Buddhist) philosophers and sages of yore whose otherwise innocuous turbans concealed brains possessed with a fiendish capacity for splitting hairs. The very antithesis of the plain-talking Strother Martin, these learned gentlemen delighted in concocting the metaphysical equivalent of the blazing hot curries on which they subsisted; arguments possessed of such piquancy that they were often disguised as bland, easy-to-swallow parables lest they frighten the kiddies or scare the livestock, so to speak.

The most famous of such parables describes the misguided attempt by a group of blind brahmins to describe what an elephant is like through touch alone. One brahmin, grasping the trunk, thinks the elephant is rope-like, the other hugs a leg and finds the elephant to be tree-like, and so on until you, the befuddled reader trapped in your occidental web of illusion, get the point and purchase another round of curry for the house.

Needless to say, this illusion business (better known as maya in the finer sort of new — and old — deli) is further compounded by this artist with the addition of a really top-knotch epistomelogical corker: the multivalent confusion generated by having everyone concerned being the same person.

In such a case, when observer and observed are one and the same, one can truly say that anything anyone might have to say about anything will be best classified as everyone speaking at once and hence no one knowing what is said (pauses to wipe forehead with a dampened dosa). Or as a certain neologizing German thinkwallah might have put it, what we have here is a failure to überselbstzeichnungangstgemachen.

Stay tuned, tolerant reader, for next week’s exciting, hijacked episode of Lewis Carroll’s Hunting of the Snark … or something like that …
___________

Late-Breaking Snark News … NYC Snarkistas Take Notice!
Peter Pavlakis' film version of the Snark will be premiered at the Queens International Film Festival, Saturday, November 14th. Further information can be found here, plus a neat trailer. It looks quite interesting, a live action version to boot! Best of luck to Peter and if any readers see it, I would love to read your comments & critiques. To the best of my knowledge, this is the 2nd live-action film version currently in production or being shown in North America right now, the other being Michael McNeff's … could this be the long-awaited Snarkian Renaissance which sweeps Hollywood into a craze for All-Things-Nonsense?
Posted by Mahendra Singh at 6:30 AM No comments: