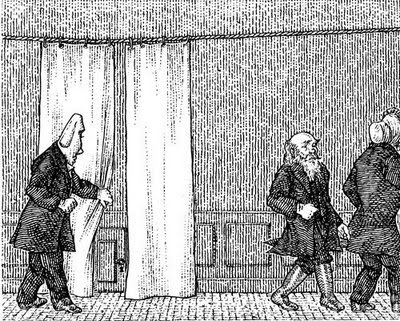 Then the Butcher contrived an ingenious plan
For making a separate sally;
And fixed on a spot unfrequented by man,
A dismal and desolate valley.

The Butcher’s ingenious plan is accomplished, as we see above, by first opening one of the doors of perception that are so handily scattered about this Hunting of the Snark. Beyond this door lies a dismal and desolate valley where he can sally to his heart’s content, undisturbed by his too-frequent fellow man.

These sort of desolate Valleys of the Shadows of Various Deaths weighed heavily upon Victorian sensibilities, lurking as they did amidst the poetry of Lewis Carroll, Kings David-and-James and Lord Tennyson alike. Vast armies of betanomic chasseurs, semi-anointed sinners and gin-pickled light-cavalrymen were regularly herded into their several depths, there to endure the shot and shell of secular and sacred verse competing mano a mano, or to be more exact, pied à pied. Strong stuff but the Butcher seems up for it, he fears no evil nor anapests at all — what ho for the crystalline noggin of feckless youth!

If all this sounds a bit too allusive for you, why, there’s another picture done by another artist, a long time ago, of another inquisitive Carrollian protagonist bent upon making her own separate sally. It’s a very good drawing and I have half-a-mind to snatch it away from its rightful owner and carry it off to some desolate spot unfrequented by man where I can copy it to my heart’s content, by printing it in the infernal method, by corrosives, which in Hell are salutary and medicinal, melting apparent surfaces away, and displaying the infinite which was hid.

And there you have it, ladies and gentlemen … an infinite plenum of poetical kings, lords, dons and even nudists charging forth from this very door, all of 'em dragooned into our Snark Hunt!
Posted by Mahendra Singh at 7:15 AM 2 comments: 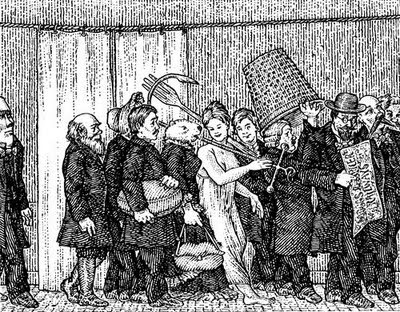 Forcible posthumous collaboration … it's not a pretty phrase and it's not a pretty sight. Sure, you could turn away, you could pretend you didn't see anything, you could tell yourself that this is just another episode in the Hunting of the Snark, and you could even shrug your shoulders and admit that its author, Lewis Carroll, deserves it.

Or maybe you'll just brush it off. You could tell your significant other that you saw something on the internet today, something horrible happening to somebody and you couldn't quite figure it out because you were in a hurry, you had googled the word snark, hoping to get some quickie cocktail-party-talking-points on the latest craze that’s sweeping the NYC chatteratti, but you landed up here …

Somebody ought to do something, somebody else should help out because you can’t get involved — who knows what kind of crazy people are involved in this, look at 'em! They seem to be high on something, and that girl, she’s half-naked! Probably some kind of some druid cargo-cult of home-furnishings shoplifters and they're chanting something about forks and hope, smiles and soap, some kind of wiccan juju, I bet. And that man at the far left, the Polynesian one with the glandular problem, and the other one holding the railway share from Moggs & Spicer, how do these kind of people get past Immigration?

Yes, it’s a bad scene so you better move along, somebody might get hurt and it's none of your business anyway. Instead, breathe deeply and say it slowly … forcible posthumous collaboration … forcible posthumous collaboration … when it happens to Henry Holiday and Lewis Carroll it's just a shame but when it happens to you — it’s a tragedy!
Posted by Mahendra Singh at 6:00 AM No comments:

The Parliament of the Snarks 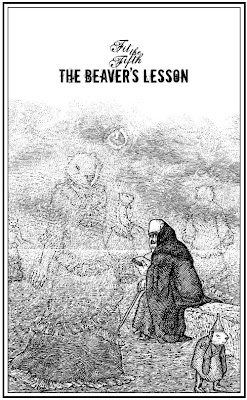 After all that hellish ruckus in the infernal Malbowge of Fit the Fourth (sorcerers, falsifiers, circus folk and publishers), we shall now ascend ad astra, as it were, to the quieter purlieus of Fit the Fifth. This canto, the longest Fit of Lewis Carroll’s Hunting of the Snark, is known amongst illustrators as the Purgatorial Fit, for its immense length requires the consumption of vast quantities of cheap whiskey and hot curries to keep up one’s strength.

The cheek! The nerve! I cannot countenance her any longer, yes, away with this Beaver’s Lesson, yes, get thee back to a punnery!
Posted by Mahendra Singh at 9:24 AM 2 comments:

Your father smelt of elderberries and your mother was a snark 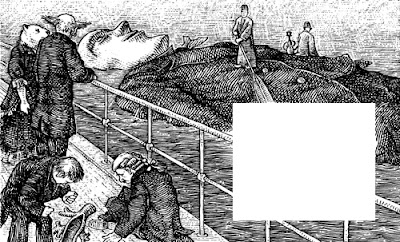 The Beaver, who happened to hear the remark,
Protested, with tears in its eyes,
That not even the rapture of hunting the Snark
Could atone for that dismal surprise!
It strongly advised that the Butcher should be
Conveyed in a separate ship:
But the Bellman declared that would never agree
With the plans he had made for the trip:
Navigation was always a difficult art,
Though with only one ship and one bell:
And he feared he must really decline, for his part,
Undertaking another as well.

The provenance of this image is, I confess, is a hopelessly adulterated concoction of all the flotsam & jetsam which churns in my head by night:
• Corrupted retinal imprints of an Alma-Tadema confection of Egytian heirophants barging down the Nile.
• Scattered brain-crumb trail of Enobarbus channeling Shakespeare's fancification of Jacques Amyot's crib of Plutarch's précis of Cleopatra burning on the water during the Montreux Jazz festival.
• Thomas Mann's Deutsche Bahn-railway-schedule-precise vivisection of the disgraced Joseph's descent down the Nile in the Joseph Tetralogy.
• A muddled childhood memory of Thor Heyerdahl's voyages … over-saturated Technicolor imagery of Incan fellahin poling their islands of bundled reeds across Lake Titicaca, through Upper Egypt and down to Easter Island.
• Most importantly, the compulsion to depict accurately an object of stone floating in water, hence proving it as light as a duck and therefore, a witch.

To those who insist upon a certain logical decorum in the threads binding an image to a text, I say: pshaw! I just rummage through the cultural debris and emotional wheel ruts, happy as a tove in a wabe. If poetry is metaphor, and metaphor is image-making, then there's more critical analysis in one panel of this Snark than in the many pages of intellectual jiggery-pokery with which Lewis Carroll has been belabored through the ages.

On the deck of the HMS Snark, we also can see The Barrister and The Billiard-Marker playing at dice over a fragment of an aortic blood vessel which appears to have been illicitly removed from the person of the poet Dante Alighieri. Here's what that other Euro-crank, Witold Gombrowicz, had to say about Dante and his Divine Comedy (another famous poem about Snarks) …

"Dante was reciting his epoch, but the epoch was also reciting, and the poem is, so to speak, a double platitude, the poet simply recited what was already being recited. Something like those Sunday discussions of soccer by people gathered in bars and coffee houses. Do they really care about soccer? Not in the least. … Humanity glides along the worn ruts of articulation. An empty poem, which exists in defiance of reality and almost as if to spite it!"*

Well, doesn't that just about wrap it up for The Meaning of the Snark? I mean, simply substitute Lewis Carroll for Dante (deep inside, you know you really want to) and — voila! A poem about nothing! A drawing about nothing! And whatever it is that you read into the drawing, that's what you truly wanted all along — and thus, deserve!

Yes, yes, yes! I know that Lewis Carroll spoke no Italian outside his bathing machine. And yes, he did claim total ignorance of the meaning of his work, in English or Italian — unlike Dante (Alighieri, not "Wombat" Rossetti), who wouldn't shut up about his boojums. Frankly, I don't know what I'm doing either, it's all the rage these days and I think it's going rather well, it always does when you draw with your eyes wide shut.
_________________

*W. Gombrowicz, Diary, Volume 3, October 16, 1966, translated by Lillian Vallee, Northwestern Univ. Press, 1993. The works of Gombrowicz are ideal for name-dropping at academic and intellectual soirées, preferably from an upstairs window and attached to an anvil.