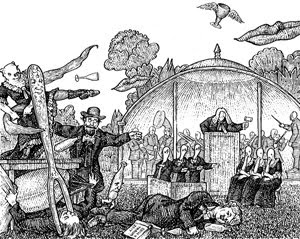 But the Barrister, weary of proving in vain
That the Beaver’s lace-making was wrong,
Fell asleep, and in dreams saw the creature quite plain
That his fancy had dwelt on so long.

Played here by the notorious Continental steamer, Martin Heidegger, (right Zeit up and left Sein down) the Barrister has been overwhelmed by the fumes of cheap plonk and the Beaver’s well-turned ankles and has sunk into a torpid sort of slumber upon the thickly inked lawn.

Our dear reader, who eschews cheap drink and chorus girls in favor of the headier vintages of Carrollian verse, will note that the Barrister has been furnished here with dreams in the plural. He or she will nod knowingly, perhaps even smugly, for every Carrollian worth their mustard and cress is cognizant of the Master’s mysterious penchant for dreams.

After mentally digesting all of this, the less tolerant DR will start things off by giving this over-heated illustrator a gentle boxing about the ears and a light touching up with a lead featherduster. They will then will reach for their Bradshaw of the Future (our preferred etymological opium den) and look pensive whilst they peruse the pedigree of the word "dream", a word which in Old English meant "joy" or even curiouser and curiouser, "music".

Tossing aside their Bradshaw with an insouciant pshaw, the less tolerant DR will then gird their loins and push their way past the more tolerant DR (still asleep and reeking of cheap plonk and ankles, no doubt) and towards the well-inked anthropomorphic forks afflicted with the Amorous Gigantism of Inanimate Objects, the Beaver’s size 9 chukka boots, the winged goblets and obligatory bar of soap, the Man-Ray-smiles and the cloth-headed judge-and-jury — all of ‘em merely a smokescreen for the 9-piece band ensconced in their band-shell in the background of this etymological-cum-epistemological mis-en-scene!

*Our readers might even be more bewildered than usual to learn that this illustrator is personally afflicted with the rather enjoyable syndrome of musical dreaming; that for many years his dreams have been provided with a sort of involuntary cinematic soundtrack, not of his choosing although usually of a classical nature with full symphonic scoring and occasional instrumental soloists. On occasion a bit of pop rubbish gets by, the theme to Star Wars or suchlike, but this artist is the sort of high-minded fellow who thinks nothing of walking out of a bad film or dream.
Posted by Mahendra Singh at 6:31 AM 3 comments:

Email ThisBlogThis!Share to TwitterShare to FacebookShare to Pinterest
Labels: Amorous Gigantism of Inanimate Objects, Bradshaw of the Future, Dreams, Hinduism, The Barrister, Through the Looking Glass

Fit the Sixth, Page 40, Panel 1 … the snarkhunter’s guide to the galaxy 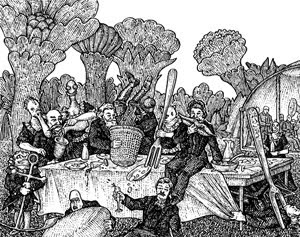 Let’s hear it for Lewis Carroll (tipsy shouts of hear, hear!) … the best Anglican maths-tutor-cum-nonsense-wallah Oxford ever produced (gurgled cries of approval emanating from a giant thimble full of wine) … a true friend of man and anaepest alike (slurred bleats of rhubarb-rhubarb, custard-custard) … and the most important Victorian poet to ever use the words railway-share! (exeunt all, with general bedlam light to variable). 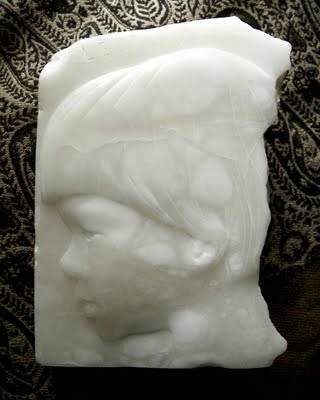 NB. It is a semi-useful fact to know that this artist is capable of more than mere ink-slinging. I am equally dextrous at not making money with mallet, chisel, rasp and stone, so there, ha! With nephew Leopold's 2nd birthday this Tuesday, the 22nd, I thought it best to commemorate the grand event by casting the young rascal in a sort of Imperial Roman role, to wit, a bas-relief of the smoothest alabaster … happy birthday, Leo! Now go eat your vegetables!

Posted by Mahendra Singh at 6:30 AM 4 comments: 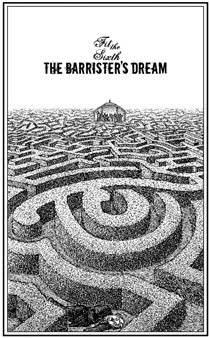 With a nightmarish fanfare of snores and snorts, Fit the Sixth of Lewis Carroll’s cri-de-cœur, AKA The Hunting of the Snark, now heaves into view. This page, a little number which I call The Barrister’s Dream, is an illustrative poke-in-the-snoot aimed squarely at the grand English tradition of Oneiric Verse, ie., such yawn-inducing showstoppers as the Dream of the Rood, Bill Blake’s Dream and Christina "Sister Wombat" Rossetti’s Dream Land.

The well-read reader, and perhaps even the ill-read reader, will note that in this Fit of his Snark, Carroll successfully introduced the nightmarish element of potential litigation into the English Dream Poem, thus bringing to light the adversarial relationship twixt Dreamer and Dream.

We all of us dream and yet none of us truly know why, nor, more to the point, what our dreams might mean. If this is not an apt metaphor for the relationship twixt the Average Citizen and the Law, I’m a frittered-cheese-wig! Hence, our need for barristers and all their jolly legal ilk cluttering the land, and hence we find that even whilst asleep, Carroll has seen fit to provide you, the D.R., with qualified legal assistance at affordable rates.

Alas, you are not so inclined. You are, like the Barrister Heidegger, comfortably reclined and fast asleep on company time, amazed by this Snark-hunter’s dream which we call life.
Posted by Mahendra Singh at 6:30 AM No comments: 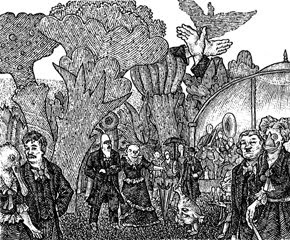 And when quarrels arose — as one frequently finds
Quarrels will, spite of every endeavour —
The song of the Jubjub recurred to their minds,
And cemented their friendship for ever!

The preternaturally alert reader will instantly recognize the decor of this panel as a quintessentially English bit of inkery lifted whole from the Yellow Submarine, that snarkalicious confection crafted by Messers Dunnings, Coates, Edelmann et alia. Their Anglo-Canadian-Teutonic vision of the archetypical English garden party, Pepperland, is shown here being hijacked by a band of desperate Snark Hunters in need of shelter from the heavy weather of Fit the Fifth.

In truth, there is little to recommend in this Fit to anyone in need of some jollies to lighten the burden of another long day working for the Man and all that. F5, as some Snarkistanis dub it, is a place where there is a gnashing of teeth and a smiting of thighs in the very best tradition of the sadomasochistic hallucinations and delusions of St. Anthony and his Victorian spiritual descendants, those lecturers at certain educational institutions who were condemned to the spiritual tortures of instructing the Boschian progeny of the upper classes in all matters animal, vegetable and mineral.

As proof positive of all of the above, let us note that Lewis Carroll, a mild-mannered man noted for his personal gentleness, saw fit to end this Fit with a semi-Swiftian comment upon all of the above. This novel friendship between the Beaver and the Butcher is cemented not by the altruistic bonds of selfless love but by the grotesque imperatives of Fear and Loathing!

Which is why this illustrator thought it might brighten up the place a bit if we had a little bit of Pepperland and the Fab Four smuggled in to do the honors for the Jubjub’s Song which closes this Fit. Come on, Messers Dodgson and Carroll, it’s not as bad as all that, all you need is love!
Posted by Mahendra Singh at 6:30 AM No comments: