He rode a blazing saddle, he wore a shining snark … 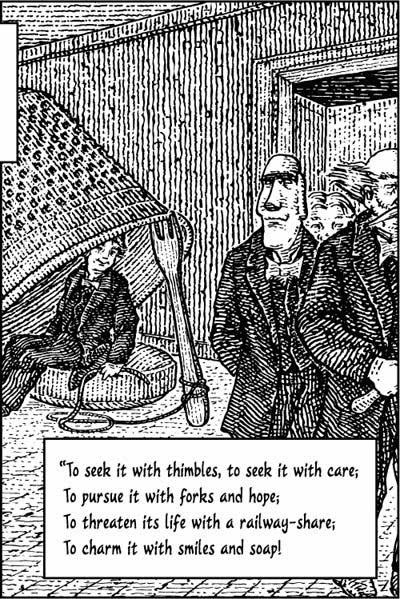 A reiteration of the Snarkic Galdor … a type of verse-charm first overheard by the poet Lewis Carroll whilst sipping his tea and mentally searching for rhymes in the commons room of Christ Church College in the lower intestines of the 19th century. No doubt Carroll was puzzled by this sudden outbreak of cryptoskáldic fervour in what was then a bastion of High Church Anglicanism but he was a discreet man and kept his thoughts to himself.
However, I am congenitally incapable of keeping any thoughts to myself! At this very moment I am mentally whirling along certain transient nodes of thought careening through a cosmic vapor of invention, as the infamous Hedly Lamar once pensed aloud to the uncomprehending Slim Pickens.
Unlike Slim Pickens, gentle readers, you will easily grasp the essence of my thoughts, which I’ve thoroughly illustrated above. The Snarkic Galdor is baited, literally, with the tempting person of the Baker himself! Lured by his smile and a bar of soap, the unsuspecting Snark will venture underneath the requisite giant thimble and then be trapped there by the quick and concerted action of the Baker’s Fellows!
The Baker’s transient nodes of thought on the matter can only be guessed at. However, thanks to the learned Adam Roberts’ ingeniously cosmic vapors of invention, we now know that the Baker’s earlier polylingual attempts at communication with his fellow B-Boyz (see Page 25, Panel 2) were simply an enunciation of the observation thatHumanorum hetaeria es auto (you are yourself the brotherhood of all men). His comrades have taken this generous, fraternal gesture of self-sacrifice on the Baker’s part as carte blanche to proffer him up as living Snark-Bait.
This business of offering oneself up as a bait for Evil must inevitably occupy the whirling, transient thought-nodes of anyone enjoying his tiffin at the aptly-named Christ Church College. Perhaps, as Carroll munched his bread and butter sandwiches and plotted his rhymes, he was entertaining first, second or even third thoughts about his own personal Boojums … or perhaps he was merely biding his time till the invention of the talking-type-wireless with which the ubiquitious Slim Pickens would finally set all of his religious doubts to rest!
Posted by Mahendra Singh at 7:53 AM No comments: 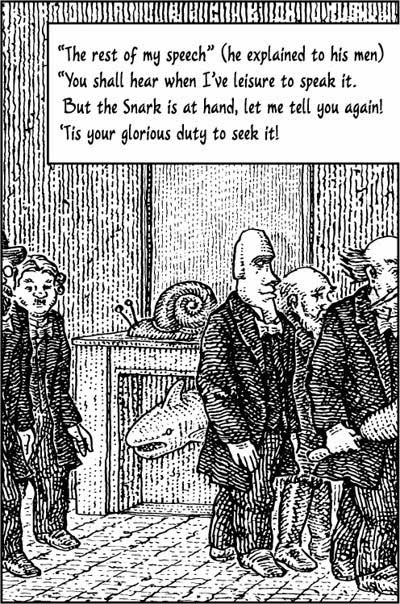 We have already nibbled upon — and spurned! — Beatrice Hatch’s assertion that Lewis Carroll had told her that the word Snark was a portmanteau of Snail and Shark. The etymology of the Snark is an entire Hunt unto itself (excellently summarized by the inestimable Bradshaw of the Future) but it seems that we are running perilously low on bullets, tinned beef and scotch-soaked mosquito netting, or so my faithful shikaris tell me … we had better return to civilization, such as it is, and seek our Snark indoors … such as these Snark Hunters pictured above are doing.Please observe that these Hunters are relying solely upon their finely-tuned instincts to track down their perilous prey and as usual, everything’s become a hopeless jumble! The afore-mentioned Beatrice Hatch’s semiolinguistic brain-crumbs have joined in an unholy alliance with the semiographic cupcakes of the Belgian pâtissier (and chronophobe) René Magritte to create a novel yet frothy confection! Of course, such half-baked baked-goods would be incomplete without some of that double-plus-good explanatory frosting which the Critics love so; I append an explanatory (and thoroughly plagiarized) morsel here:"I decided to paint the image of a shark . . . In order for its mystery to be evoked, another immediately familiar image without mystery — the image of a snail — was joined."
Well, there you have it : an Indo-Germanic-Belgo-Anglo-Saxon layer cake of ink and words … I call it Beatrice’s Revenge, for it’s a rather heterogenous and unsettling dish best served cold, perhaps as an after-dinner dessert? Of course, Lewis Carroll’s original photographic bonbon of Miss Hatch was also a bit cloying but certain artists will always indulge their sweet-tooths!
Posted by Mahendra Singh at 7:57 AM 3 comments:

Careful with that snark, Eugene 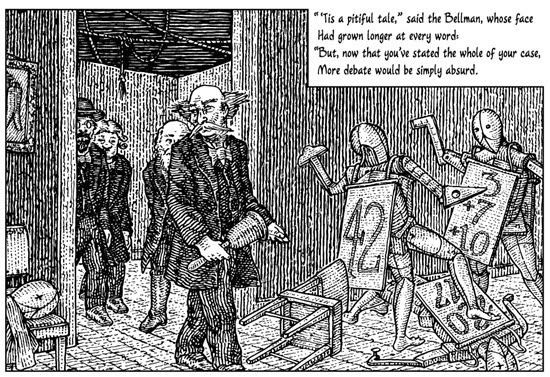 There comes a time when even poets such as the Talented Mister Lewis Carroll draw a blank, as the saying goes. Yet such deficiencies seem to have not bothered him a jot or tottle in the long run; he simply brewed up a fresh pot of tea, chewed reflectively upon his quid of paan and sooner or later, he would come up with the poetical goods and fend off the Boojums at the door.
However, when an ink-slinging wretch such as I draws a blank, adverse professional consequences can result. Drawing a blank may be suitable behaviour for those blessed artistes who frolic in the Elysian Fields of the MOMA or the Tate but for us illustrative hacks bent over our drawing boards in the sweaty back-forty of Dante’s Inferno (Circle 8, Subsection 5, Barrators and Flatulants) such antics are the stuff of which bankruptcies are made of.
When deadlines press and the ol’ brainbox is running on fumes, remember the scuola metafisica’s dictum to draw only that which cannot be seen. The main thing is to keep one's pen busy, just bash on regardless, no thinking required … always bear in mind the words of a certain politician who once declared that he did not care what the facts were.
Who can argue with that, eh?
Posted by Mahendra Singh at 6:00 AM No comments: