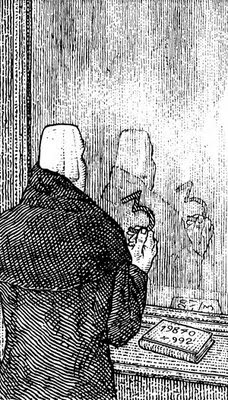 “The result we proceed to divide, as you see,
By Nine Hundred and Ninety and Two:
Then subtract Seventeen, and the answer must be
Exactly and perfectly true.

This baffling stanzel of The Hunting of the Snark (known to Continental snarkologists as the Pons Asinorum) presents the illustrator of all things Lewis Carrollian with a genuine head-scratcher.

Unlike some illustrators who invariably resort to a stylistic and conceptual flight behind the faux-ironic concealment of an adorably semi-infantile aesthetic when confronted by any text more complex than, let us say, the plot précis of a sharp blow to the head, this illustrator (pauses to take a deep breath and a swift gulp of the restorative gin gimlet splashed upon him by the nubile Assamese hootch-kootchie girl languishing pool-side at his every beck and call), this illustrator likes to give his public some honest value for their hard-earned money.

And since this entire mighty enterprise which I call The Hunting of the Snark is offered to you through the good offices of Melville House Publishing and Editions Seghers, one would expect a certain modicum of cognitive consonance in these drawings. And yet … of cognition, there is none. And as for consonance — begone! Enter … Nonsense!

Indeed, the jig is up and I'll raise high my gin gimlet in a cheerful acknowledgment of the utterly baldfaced cheekiness of the above illustration. It’s all hokum, every last bit of it. Lewis Carroll has clearly described some sort of mathematical thingum-a-jig and all I’ve come up with is a hazy, second-hand memory of an obscure Magritte semiopictulum of Edward James going through a looking glass and finding that the more you turn around to face oneself, the more you must turn one’s back on all that. Or something like that. Mirrors and mathematics alike give me a headache with their slavish devotion to reality and all that sort of thing, each claiming to demonstrate only that which is perfectly and exactly true.

The creepily eagle-eyed reader will notice that a copy of E.A. Poe’s Narrative of Arthur Gordon Pym is lurking in Magritte’s painting, a novel which this author boldly and a bit drunkenly asserts to be the Great American Novel. Take that, you big fat white whale! And if this opinion does not please you, sirrah, my Assamese spitfire is perfectly willing to fight you upon any terms you please!
Posted by Mahendra Singh at 8:04 AM No comments:

Night of the Snark Hunter 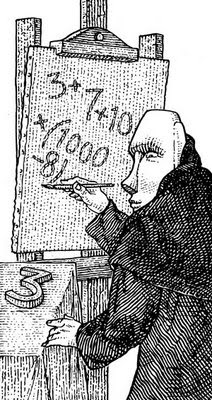 “Taking Three as the subject to reason about —
A convenient number to state—
We add Seven, and Ten, and then multiply out
By One Thousand diminished by Eight.

This is not a clue to the fabled and elusive meaning of The Hunting of the Snark, for this is not clairvoyance.
Posted by Mahendra Singh at 7:08 AM No comments:

When the going gets wierd, the wierd turn snark 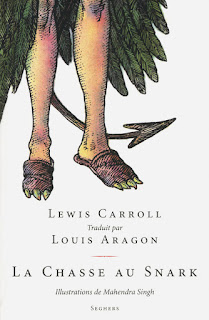 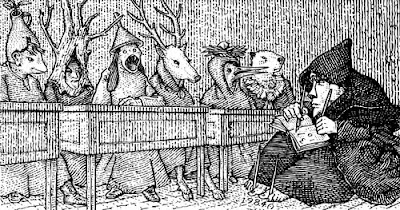 The Butcher is shown here writing a footnote, two of ‘em since he’s ambipedextrous, an affectation rampant amongst Liberians and Americans, both of whom share an affinity for feet over meters, the rascals! One of the most prodigal of these American meterphobes was the journalist, Dr. Hunter S. Thompson, who gained a considerable notoriety for "explaining it all in a popular style" to an otherwise unsuspecting American public.

As your attorney, dear readers, I advise you to avoid eye contact with all these suspect, hallucinatory inhabitants of weirdo drawings brandishing their trippy, second-hand anapaests and uncomfortably reminding us that when the going gets weird, the weird turn pro. We are but amateurs of the Snark, you and I, and as such, cuddly little fluffy things ill-suited to the rigors of modern life and all that other mental stuff.

Posted by Mahendra Singh at 8:01 AM No comments: