Is there a Cuban doctor in the house? 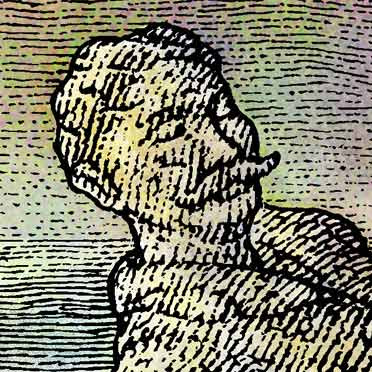 Even Snark hunters need a hiatus from time to time, so this week we'll eschew (temporarily) Carrollian verse for something a bit less Nonsensical …

The Hooded Utilitarian has launched a series of postings, combining the verse of Wallace Stevens with the artwork of 20+ artists. There's an intro here which you can bookmark to easily access all the various verses & pictures as they come on-line over the next week, one by one, in alphabetical order.

You can see & read my comixed version of The Cuban Doctor here.

This should be quite interesting for all verse lovers and in particular, for those artists interested in illustrating verse, which can be quite a tricksy business, like hunting Snark but without all the glamour and publicity.

And many thanks to Noah Berlatsky for coming up with this pretty neat idea, plus enduring the attendant headaches of editing it.
Posted by Mahendra Singh at 6:00 AM No comments: 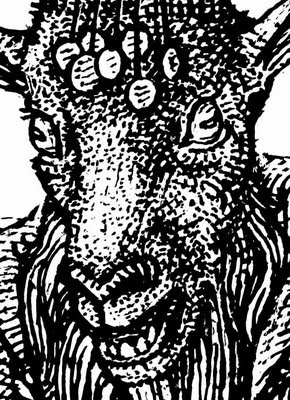 "… what Lewis Carroll would say about the goth niche … I suspect he would have grabbed a riding crop and delivered some hearty blows to the heads of the lower classes … We can’t have pond scum or bottom of the pond scum crawling to the top and making cultural choices … if we visual and verbal people continue to whore ourselves out so shamelessly, we’re going to get what we deserve, which is nothing."

To read more of Sean Michael Robinson's interview with me at The Comics Journal, click here. And thanks, Sean, for bringing my rant to the masses. That should really make 'em want to buy my book, the ironic rascals.
Posted by Mahendra Singh at 6:00 AM 2 comments:

Email ThisBlogThis!Share to TwitterShare to FacebookShare to Pinterest
Labels: Sean Michael Robinson, The Comics Journal, You kids get off my lawn 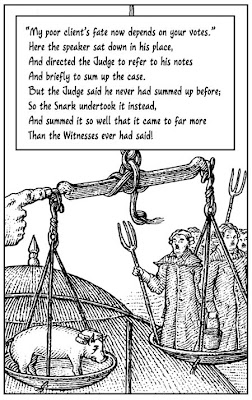 If you've ever had the pleasure of a boozy, slobbering confabulation with a magistrate or judge in mufti, you'll know that they're well equipped to sum things up, no matter the circs. Of course, the present situation is rather mind-taxing for even the keenest legal mind and in such cases a quick supplementary evidence-collecting trip to the corner liquor store is indicated. Snappy legal thinkery is best done with one's mind defragmented by pure, wholesome gin and tonic substances and milord agrees whole-heartedly.

And the above drawing shows that the Snark has acted with Gordian decisiveness — by cheating! His gnarly finger tips the scales of justice ever so slightly towards his porcine defendant and leaves us all with the customary bad taste of purchased justice in one's mouth.

It's a heady tipple, this Nonsense vintage we call The Hunting of the Snark and best left to professionals like judges, illustrators and poets!
Posted by Mahendra Singh at 6:00 AM No comments: 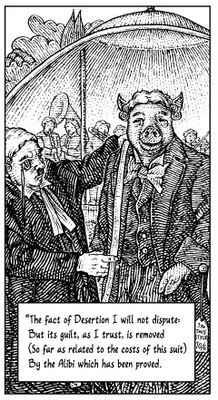 What’s this, the Judge sputters! Sanity Clause? You can’t fool me, there ain’t no Sanity Clause! Exactly, milord, 'tis the perfect Christmas Alibi, the Snark replies!
Posted by Mahendra Singh at 6:00 AM No comments: