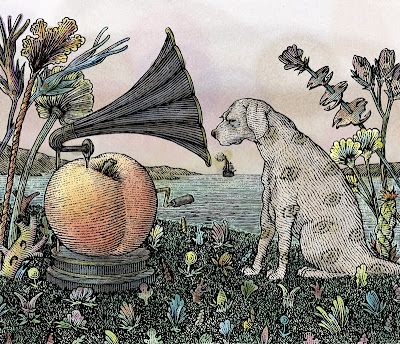 In between hurricanes, earthquakes, repairing leaking wells, attending weddings and doing some illos for Byron Sewell's Alothk in Wonderland, time is a bit short this week. So here's another colorized re-run from my GN version of The Hunting of the Snark, a frontispiece, entitled …

The Bellman's speech is of that particular British provenance yclept "fruity". Not so much "plummy" but rather … "peachy". If one removes the fuzzy skin thereof (the burr, so to speak) one is left with a nectarine. This fruit (spelled n-e-c-t-a-r-i-n-e but pronounced "stuffed cabbage") was the preferred nutrition of most cavemen and it was they who first domesticated the dog (probably a King Charles Cavalier but that's another story entirely).

We see here a sample of that species, a young pup named Laelaps, who attends upon his master's fruity voice. And what does he hear? A sonorous mussitation which leaves no impression upon him at all, for, as Thomas Aquinas noted, dogs have no souls (the scholastic cur). Hence their proverbial high fidelity is but a marketing ploy.

A dog, a peach, a gramophone — after all these years, my own 3-piece jazz combo! At last, I can take a bath. And just in time too, my gin-driven ink-pen's almost run dry.

Email ThisBlogThis!Share to TwitterShare to FacebookShare to Pinterest
Labels: His Master's Voice, Laelaps 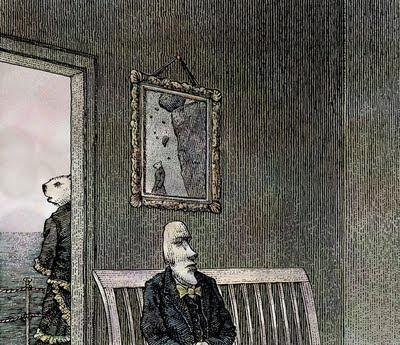 I apologize in advance but this week's posting must be a re-run, something from Fit the First of our GN version of The Hunting of the Snark. This is a colorized version, so do not adjust your sets …

And so … we are indulging in a pre-Socratic, pre-school tautology of existential hide-and-go-seek … the Beaver dematerializes her stony-faced nemesis, the Butcher, by averting her eyes. Lewis Carroll disarms his Boojum by composing the Snark backwards and thus placing the former into a perpetually receding, invisible future of the latter. As for myself, I'm one of those literal-minded draughtsmen who cannot draw what he cannot see. I shall spurn Rule Number One of Illustration (if you cannot draw it, place a bush in front of it) for I am above such petty stratagems — a plague on all manner of foliage, those leaves, so many, so many, is there no end to them? The naked Boojum shall remain a naked, undrawn, unseeing Boojum.

*Vide the protosurrealist Andrei Vyshinsky's observation: "The fact that it is dark at night proves merely that I am not paying attention." ("Clinical Morphology of the Parimutuel — Impressions of Mr. Pyridine", Berlin, 1897).

Transportation for life … it's not a pretty sentence, not even a pretty sentence fragment. Has the Defendant Pig been deprived of his Lexus and condemned to using the subway for the rest of his life? Has he been reduced to riding a bicycle to and from his sty? A skateboard with obligatory tattooes and iPod prostheses?

Gosh, no, he's been deported to one of the British penal colonies, such as Australia, where he can endure the agony of fresh air, sunshine and limitless social and business opportunities instead of the customary Victorian British urban pollution, pouring rain and stifling class system. Although, to be honest, I don't think that by the time the Snark was composed (1874-1876) the British were deporting felons to Australia anymore but I think you get the picture … or even better, you don't get the picture!

Cue evil laughter here, and meanwhile, peruse carefully the above picture. Now compare it to the one at the very top of this posting, the version which appeared in print.

Would it surprise you to learn that this artist often draws that-which-is-not-to-be-seen by the reader, ie., he goes to the bother of drawing whatever it is that the word-panel will obscure when it is positioned later in the production process?

I didn't think you did, smarty pants. Frankly, how could you? How could you guess that I would go to such ridiculous, creepily epistemological lengths to subject various players in my Snark to the dreaded … transportation for life!

The more thoughtful reader will quickly grasp that this curious graphic practice is the visual equivalent of the literary "softly and suddenly vanishing away" which the poet has utilized as the First Cause of his Snarkish plot engine. Pictures aping words aping pictures aping words, and all that. Such complex and delicately crafted levels of conceptual meaning have proved to be a reliable turn-off for the general book-buying public, I can assure you.

Lazier (and faster breeding) readers will content themselves with observing that various members of the jury have themselves been transported for life and that it serves them right. They might even exclaim aloud: This is not a legal system, it's utter Nonsense, I mean, good lord, look at them! Everyone resembles Martin Heidegger. That's not justice and it's certainly not legally sound nor even a legal sound.

Say it slowly, to yourself … Heidegger … Heidegger … it's more of a sneezy ejaculation, a snorty, snirty, snarky clearing of the upper respiratory system with viscous, Flemish connotations … it won't hold up in any court of law, much less a dream court populated by somatic body doubles.

Next week: a cease and desist letter from the Heidegger estate and a hearty thanks from the North American Swine Producers Council.

NB. Attention comix fans!
The Hooded Utilitarian has published the results of its Best Comix Poll Ever, the collated opinions of various artists, writers, critics, vendors, etc. As always with the HU, the results are instructive and they're currently expanding upon the subject with explanatory essays, rebuttals, detailed break-downs, etc. This artist's response to the poll should appear there shortly and is guaranteed to please any fellow devotees of Mixtec and Mughal comix art …

The HU's poll is worth a look, especially for younger illustrators. To be honest, the results confirmed my worst, elitist suspicions about the circular ruination of North American illustrators/comix wallahs … you are what you look at and if this is what some of us are looking at, yikes.

Inking towards Gomorrah, with scarcely a penny in my pocket and the debt-collector at my heels, drawing well is the best revenge. Second best is seeing well.

Email ThisBlogThis!Share to TwitterShare to FacebookShare to Pinterest
Labels: Martin Heidegger, The Barrister, The Hooded Utilitarian 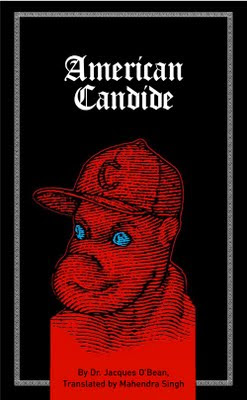 A brief break from Carroll and comix and Snarks … a sample from an on-going translation of Jacques O'Bean's acid-tongued, Juvenalian update of Voltaire's classic … American Candide.

“Dear children,” Doctor Pantone would say, “always remember that although you’re the freest people on earth, there are those who hate you for that very freedom. And why is that? Because you are free — and they will never be free, except to hate you. That’s the difference that real freedom makes!”

Strong stuff, eh? Read below, with illustrations by this artist or download here. 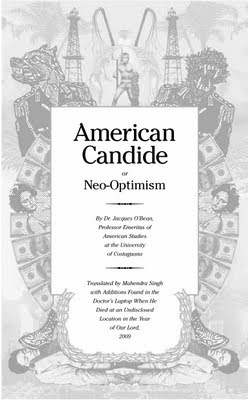 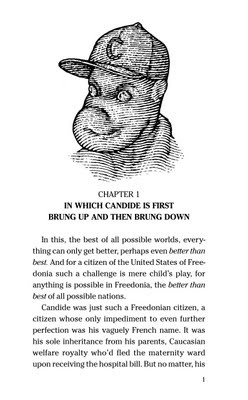 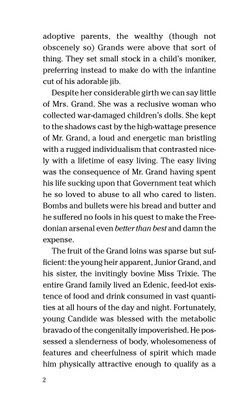 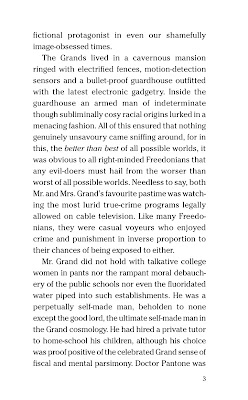 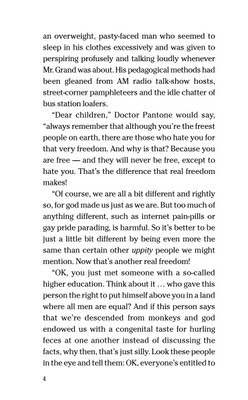 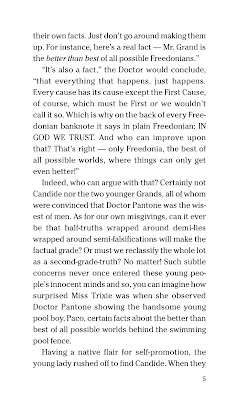 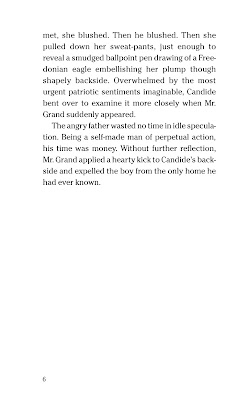 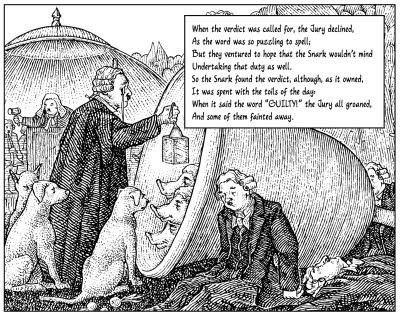 When drawing a dream in which the dreamer not only plays the part of every character in his dream, but is himself being played by the Eminent Continental Steamer, Martin Heidegger, the prudent illustrator pauses for thought.

From whence comes this illustrator's antipathy for Marty Heidegger? Is it the blathery philosophical drivel? The penchant for racist careerism? The beady, piggy eyes?

Perhaps the above stanzel can furnish some answers, for it is intimately concerned with "finding a verdict", ie., a quest for the truth, forensic and otherwise. The truth in this case is GUILTY, a blanket existential statement which Marty would have approved of, appealing as it does to the winsome young co-eds that Marty preferred to rummage through after classes. 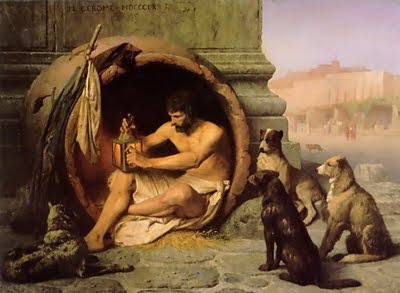 But we Snark Hunters are made of sterner stuff. We take our philosophical marching orders from none other than Diogenes the Cynic (as shown here in Gerome's splendid painting), the bane of bloviating professors and politicians alike!

Diogenes was very much the Boojum of Western philosophy's Snark Hunt, preferring as he did to simplify things by cogitating in public while naked. He was a jolly rascal who often wandered through Athens with a lantern in daylight, claiming to be searching for an honest man. In case no one got the joke, he also preferred to live in a large barrel in which he would roll through the agora during moments of national crisis, a political tactic in need of revival in our troubled times.

His philosophy was simple, literally, and this simplification has earned him the eternal disdain of more practical-minded people, the kind of people who prefer the more comforting truths of money, religion, consumerism and groupthink.

In our Snark Hunt, we've replaced his barrel with the Bellman's Bell and we've clothed him in the garb of an English Barrister so as not to frighten the kiddies, but I think you get the general idea.

The truth, dear readers, is the very last thing one wishes to entrust to Barristers or Philosophers, unless, of course, they are furnished with a lantern, smelling of raw onions (oh yes, I've included them) and blessed with a dog-like sense of fidelity to the tenets of Cynicism.

Of course, we're all guilty of something or the other in this Snark Hunt, alas.

But you can buy a copy of this graphic novel and thus expunge some of your guilt in enjoying this free Carrollian exegesis whilst I shiver in my barrel-like garret. I shall expunge my own guilt by emulating Diogenes and doing some naked inking whilst my faithful King Charles Cavalier Spaniel lies at my feet, dreaming of chasing the squirrelly Boojums which plague her sleep.