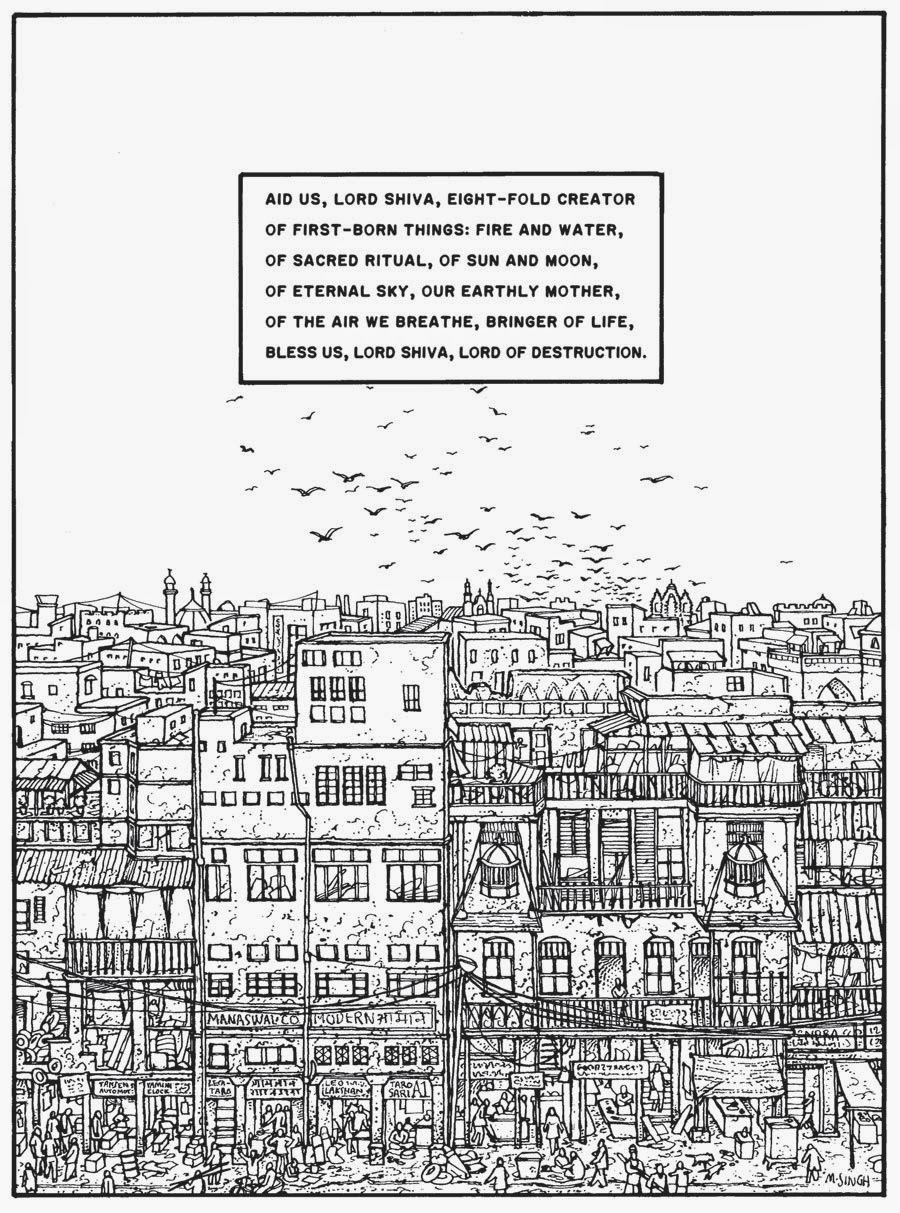 I'm too pooped to do anything Snarkish this week … April is the cruelest month with its sooty, rooty showers, I'm off for a cuppa tea and a bit of Vedic inkery.

Meanwhile, Ron Miller did a profile on me at io9 … it's got all the juicy goodies on my phosphorescent appeal to lovers of Jules Verne, steampunk, Adam Roberts, JC Valtat and many other authors … even Lewis Carroll. He's the original Nonsense glow-worm!

Posted by Mahendra Singh at 12:42 PM No comments:

You know how to snark, don't you? Just put your lips together and blow.

We're frolicking through yet another exegesis of my Snark GN …  deep in the anapestic bowels of Fit the Second …
We have arrived now at the very omnium of Fit the Second, that critical portion of The Hunting of the Snark in which Lewis Carroll describes in detail the characteristics of the Snark. To explicate these crypto-stigmata, the Bellman has resorted to the very respectable Victorian expedient of the illustrated public lecture with the aid of a  magic lantern to illuminate the more difficult concepts of his lecture.The Bellman’s preamble (which actually commenced in last week’s stanzel) mentions three numbers. The numbers 7 and 5 appear on lines 54 (Seven days to the week I allow) and 58 (The five unmistakable marks), which, in addition to his mention of the number 4 on line 50 (Four weeks to the month you may mark) in last week's stanzel, allows us (nay, compels us!) to perform the following simple Clochetic equation :

7x5x4=140We now employ the number 42 (whose Snarkian significance needs no further explication to the illuminati who frequent these parts) thusly …
140/42=3.333 …
As predicted by the Clochetic Rule of Three, the entirety of the Bellman’s introductory remarks concerning the qualities of the Snark has also served as a verification of the truth value of 42 by multiplying that auspicious number precisely three times — in an infinite and irrational repetition, to boot!

QED and bob’s your uncle.
Posted by Mahendra Singh at 10:43 AM No comments:

Words, what are they good for? Absolutely nothing, yeah! 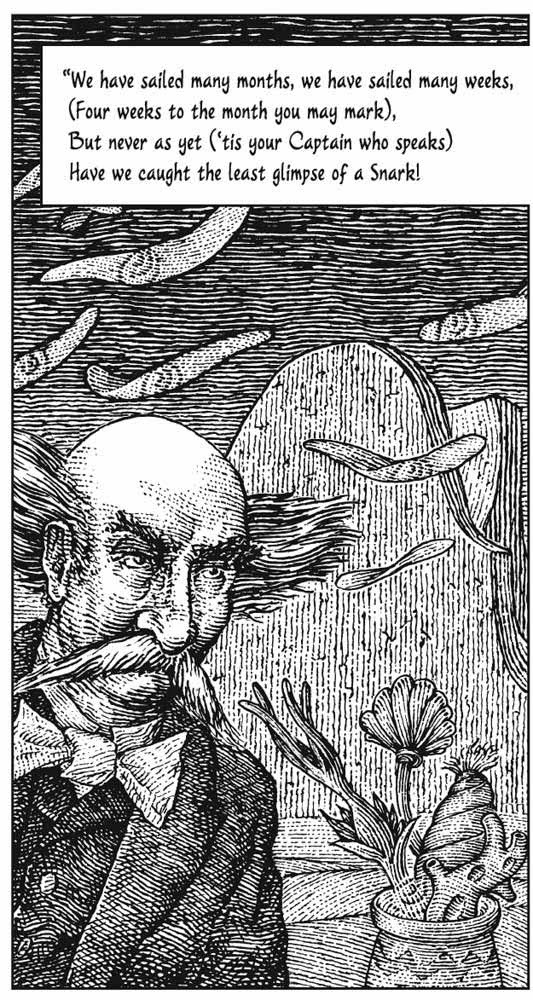 We're frolicking through yet another exegesis of my Snark GN …  deep in the anapestic bowels of Fit the Second …
There are those who might quibble and look askance at my rather ideologically vacant interpretation of this stanzel. Yes, it is a trifle irrelevant … perhaps even mendacious to illustrate a purported lack of Snarks with a veritable snathe of Snarks.* The concerned reader might well ask : by whose leave do you have artistic license to mangle the words of Lewis Carroll so? Have you no decency, sir? At long last, have you left no sense of decency?The eminent Oxford don, Charles Dodgson, was probably the only person who could genuinely claim to be intimate with Lewis Carroll. Mr. Dodgson had this to say about the so-called sanctity of Carrollian texts, their meaning and interpretation:... I maintain that any writer of a book is fully authorised in attaching any meaning he likes to any word or phrase he intends to use. If I find an author saying, at the beginning of his book, "Let it be understood that by the word black I shall always mean white, and that by the word white I shall always mean black," I meekly accept his ruling, however injudicious I may think it.Well, that’s pretty much QED, I should think. Simply substitute the word "illustrator" for "writer"; it’s a mere sneesh of semantic and orthographic difference and expressly allowed for by the above-mentioned axiom. In fact, upon further reflection, we can see that the majority of modern art, philosophy, politics and commerce is based upon Dodgson’s diabolically simple postulate.So stop fussing over these drawings and rest a spell under the ole Boojum tree with me. Goshdarned wordpeople, always making trouble for poor picturefolk …___________________________________________________*Please remember that throughout this GN, the Snark is illustrated with an Eye … rather like the Cinema-Sauron but less user-friendly. As for the word snathe, it is used here in a probationary sense. Lewis Carroll never revealed the correct nomenclature for a group of Snarks (ie., a kettle of fish, bunch of whales, etc.) and I have used this word solely as a place-holder of sorts until they (you know who I mean) come up with a better one. I had also considered — and rejected — snatch, sneck, sneap and of course, S.N.A.R.K. (Simultaneous Non-entities Apparitioning Rather Keenly). For those who persnick at such things, all of the above are legitimate entries in Chambers Dictionary.
Posted by Mahendra Singh at 7:13 AM No comments:

This delightful video from the Musée d'Orsay is an animated tribute to the master of Victorian-era illustration, Gustave Doré. My own illustrations for Adam Roberts' latest SF homage to Verne, 20 Trillion Leagues Under the Sea, began for me as an extended riff upon Doré's stunning illustrations for The Rhyme of the Ancient Mariner. My drawings evolved into additional borrowings and references to Harry Clarke and Virgil Finlay but at the core, it was always Doré.

The connection between Doré and Verne is very strong and worth studying, both of them were masters of the theatre. Doré's handling of arbitrary light sources and deep volumes, combined with the hypnotic surface attraction of perfectly handled crosshatching is a precise visual translation of Verne's own use of detailed set design and theatrical plotting.

At the heart of the Mysterious Island, that's where Gustave and Jules and Danny Defoe are relaxing in their hammocks, drinking Friday's latest batch of home-made plonk and cheering on Adam Roberts in his latter-day Vernian crusade! 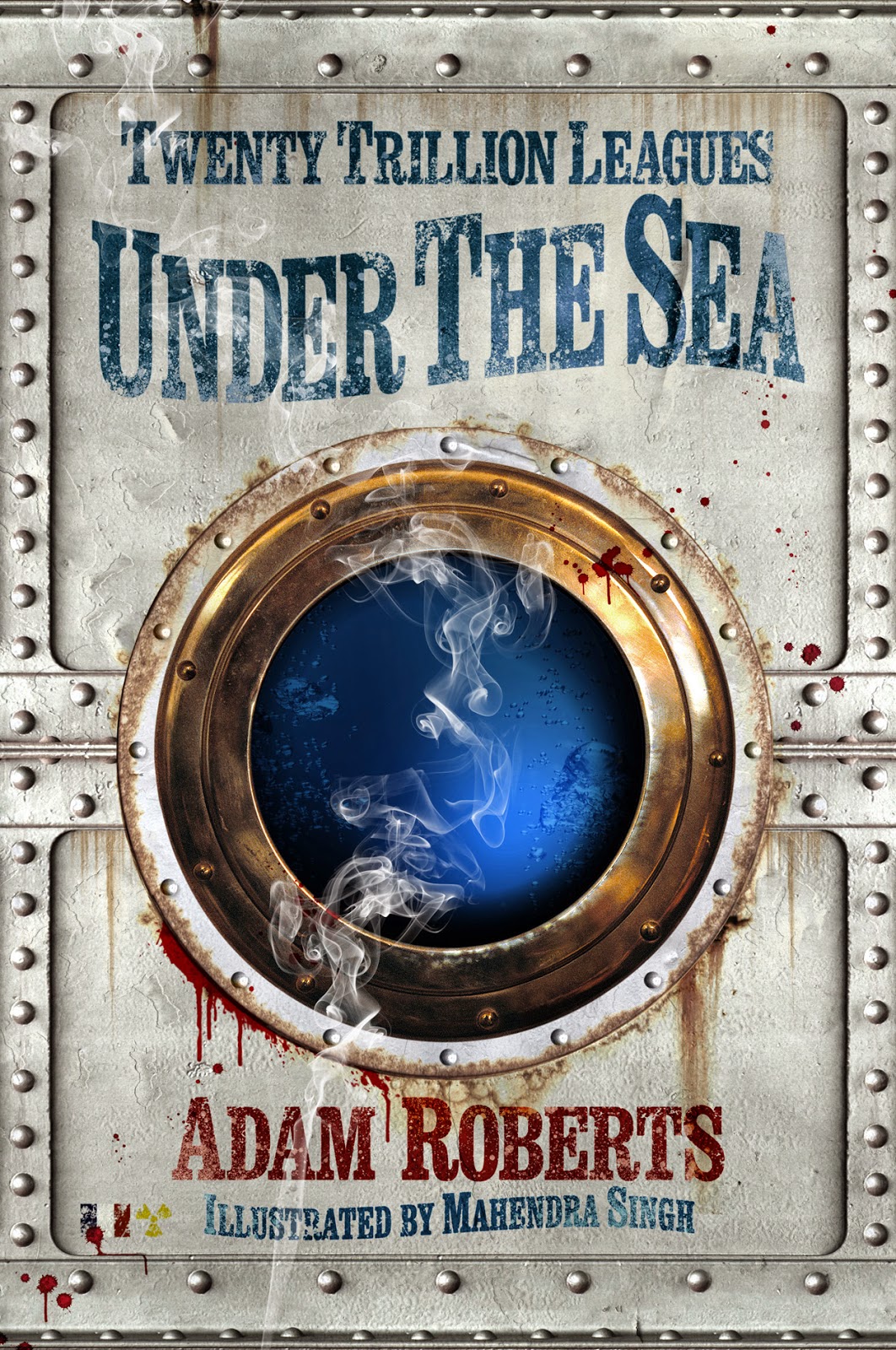 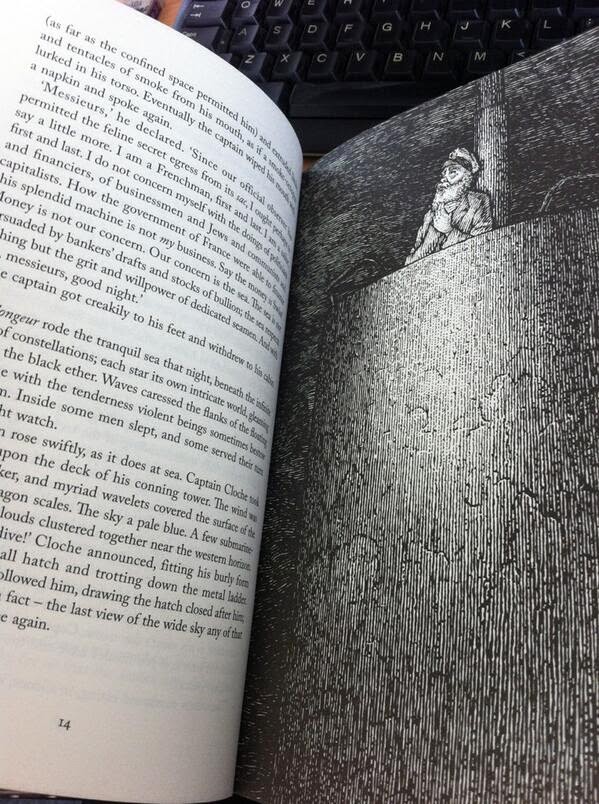 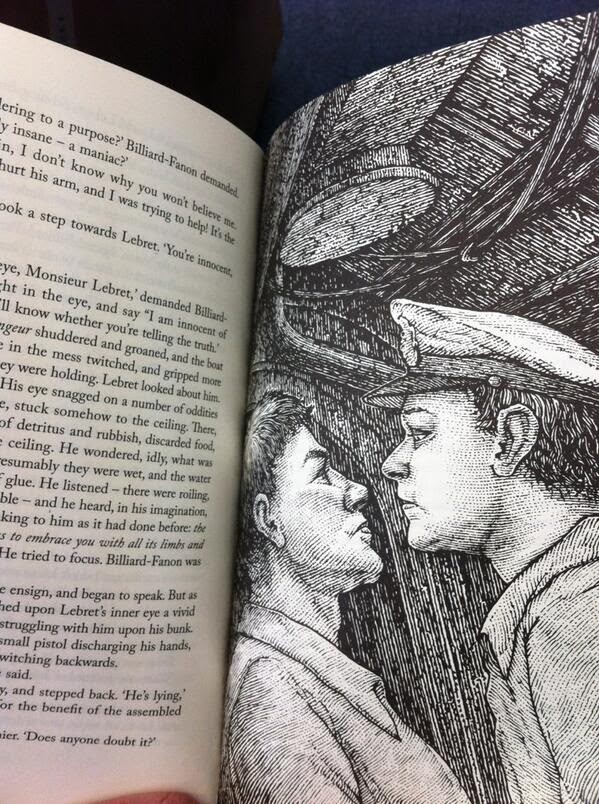 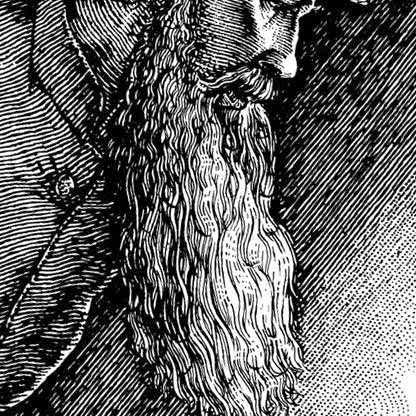 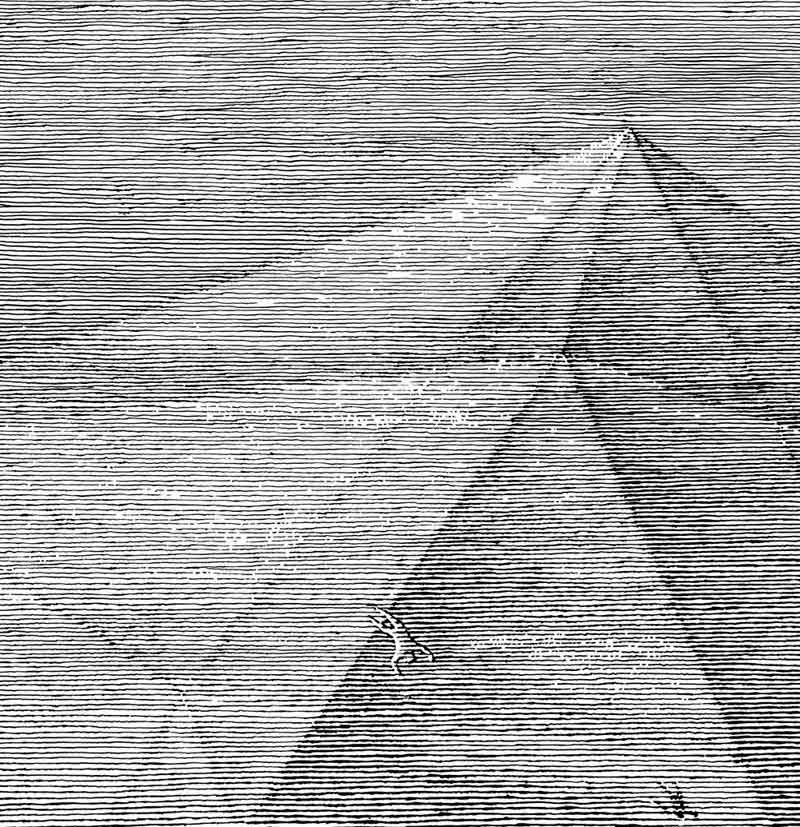 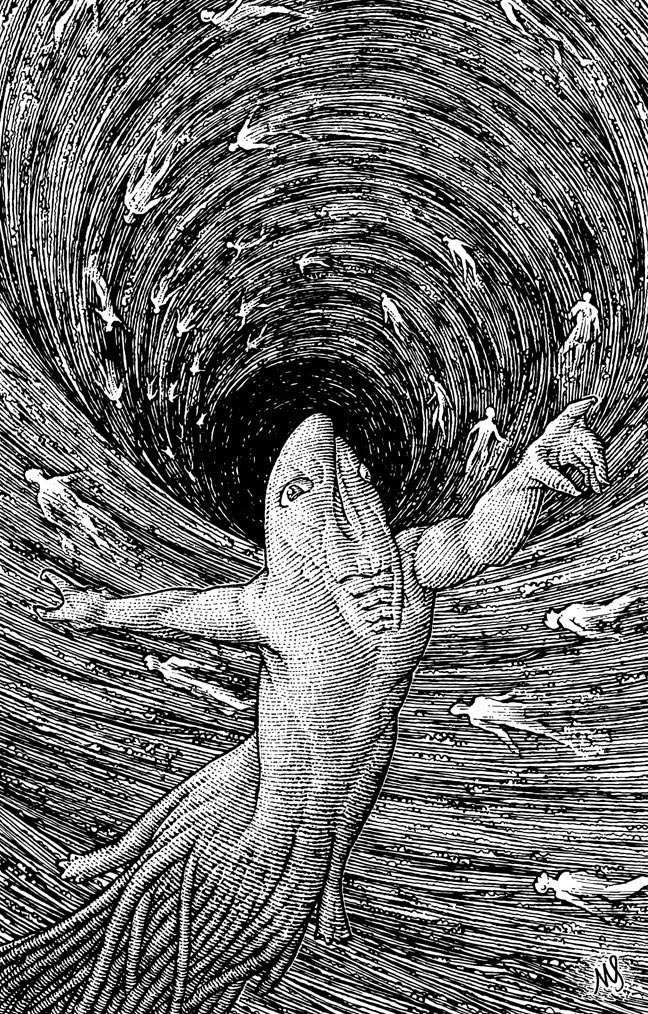 Snarking to the Finland Station

The ear motif receives its third and final reiteration (thus fulfilling the Clochetic Rule of Three) in the somewhat maimed person of Vincent van Gogh, who stands behind Comrade Bellman (somewhat in the manner of a Laputian flapper) to encourage the enthusiasm of all concerned with his sinister aura … of menacing risibility. 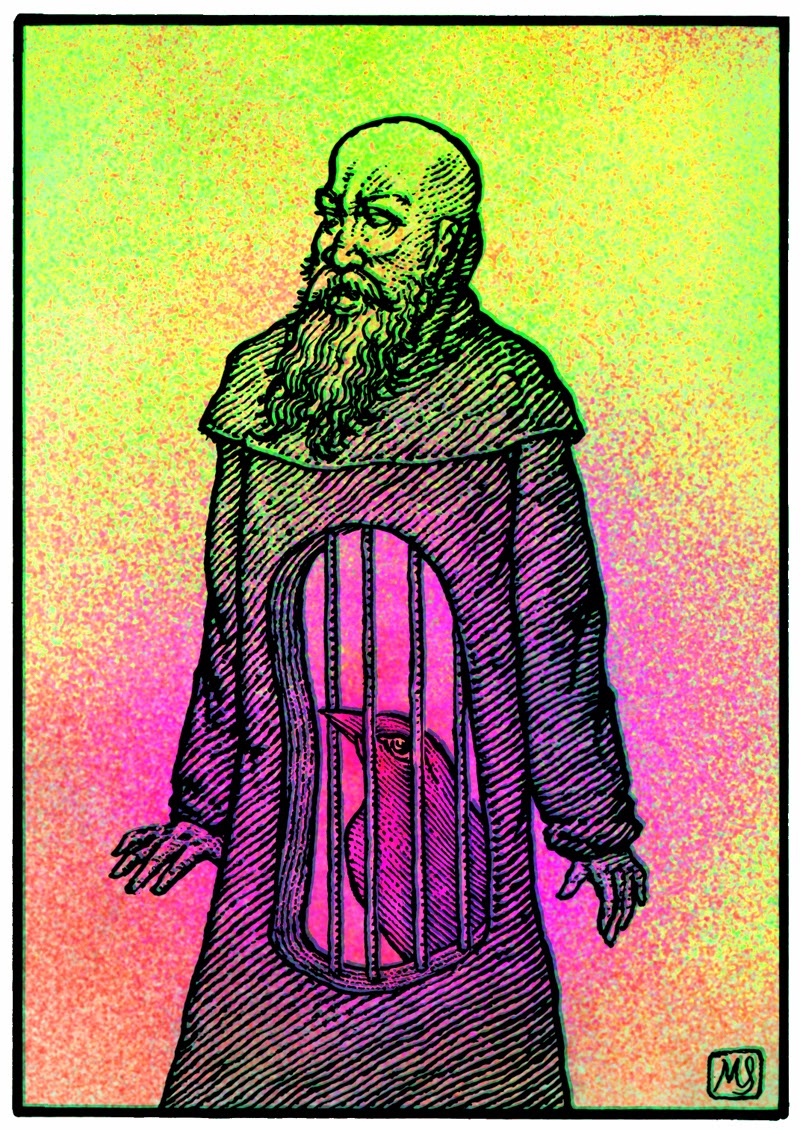 Will Schofield has very kindly posted a short bio of my late aunt, Monica Tornow, at his Writers No One Reads. On 50 Watts, he's also posted two pieces written by her in the late '70s for Manuskripte, the Austrian literary magazine, one of them translated by myself and another by Malcolm Green in his must-have Black Letters Unleashed (Atlas Press, 1989). There's also some pictures I drew for the two pieces, for the children to play with if they get bored while you're reading. My aunt loved children, especially if they smoked and drank and talked left-wing politics.
Posted by Mahendra Singh at 8:02 AM No comments: