The Obscure Object of Snark 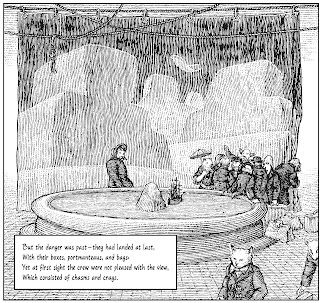 All the world’s a stage and all the men and women merely Snark hunters: they have their exits and their entrances; and one Bellman in his time plays many parts, his acts being eight Fits. We have arranged things so that our B-Boyz players shall now disembark into a romantic comedy of the sort calculated to warm the cockles of even a Boojum’s heart.While our snarkistadores peek backstage, the action downstage is upstaging them. A painted backdrop of the Desierto Pintado has set the mood. Love is in the air and will soon compel the Mouse pictured at stage-left to propel a fortuitous Brick upon the noggin of the unsuspecting Kat.But is it true love, ask the critics? Is Mouse + Kat + Brick = Love a suitable proposition for the hardnosed, Gradgrindish theater of today? A Boojum in Surrey … a Brick in Coconino … an allegory of the search for happiness or a quick krease to a Kat’s noggin … the course of true love never did run smooth.I say pshaw to the critics, the play's the thing! We must follow the sterling example of the sublime Mr. Herriman and summon the local gendarmerie! Offisa Pup, take ‘em away, the l’il dahlinks! Yezzah …
Posted by Mahendra Singh at 10:09 AM No comments:

Waiter, there's a Nietzsche in my snark! 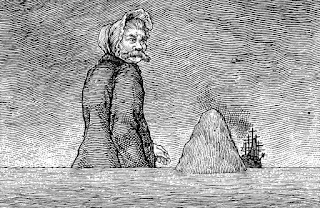 Another wordless sighting of the HMS Snark, observed tacking ‘round the Bonnet-Maker, whose resemblance to Friedrich Nietzsche borders upon the implausible. But plause we must! After a promising start in hunting Snark on the Continent, Fred Nietzsche was surprised by a Boojum on the streets of Turin* in 1889. The shock was fatal … in his own words …

**Black Letters Unleashed: 300 Years of Enthused Writing in German, Ed. by Malcolm Green, Atlas Press, London, 1989. Do we detect the perfectly light and razor-sharp touch of Robert Walser in these sad lines? Oh, these literary bread-crumbs with which we encrust the Wiener Schnitzel of protosurrealism!
Posted by Mahendra Singh at 10:10 AM 2 comments: