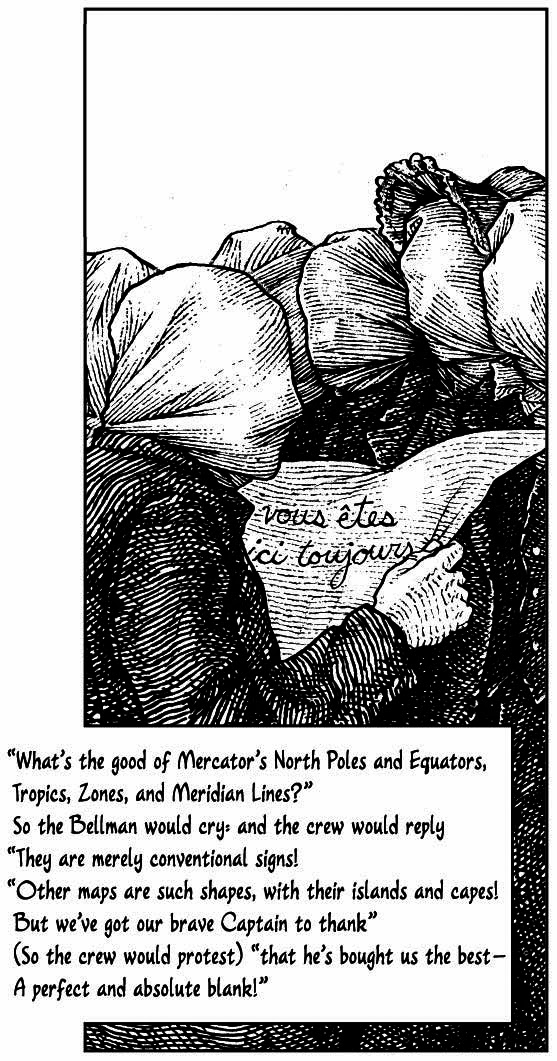 Yet another shameless Magritte pastiche, and not the last one to grace these pages, I'll wager. Shameless — the 10th Muse of Protosurrealism!

Even more shameless — this insistence that the crew of the HMS Snark use the French language for navigational purposes when it is clearly evident to anyone who has ever been lost at sea that English is the natural language of confusion. This is easily verified. Stand on a street corner in any francophone city and ask a stranger: where am I? If necessary, pull at shirtsleeves and wave your arms, speak very slowly while pronouncing every phoneme at the highest decibel level.

I shall be observing you from inside the comfortable vantage point of a nearby bottle of plonk. Do not make eye contact with me or else — sapristi! Garçon, call the police, this crazy-man-anglais-cowboy-streetperson is bothering me!

NB. The champagne corks are popping and the mishti's flowing in Shillong and Mumbai … my wife's mawsi (aunt), Parveen Sultana, has just been awarded the Padma Bhushan by the Indian government. If time permits in your busy day, take half an hour to enjoy her artistry, you will not be disappointed …

Posted by Mahendra Singh at 7:33 AM 4 comments:

Full fathom five thy father lies; of his bones are snark made! 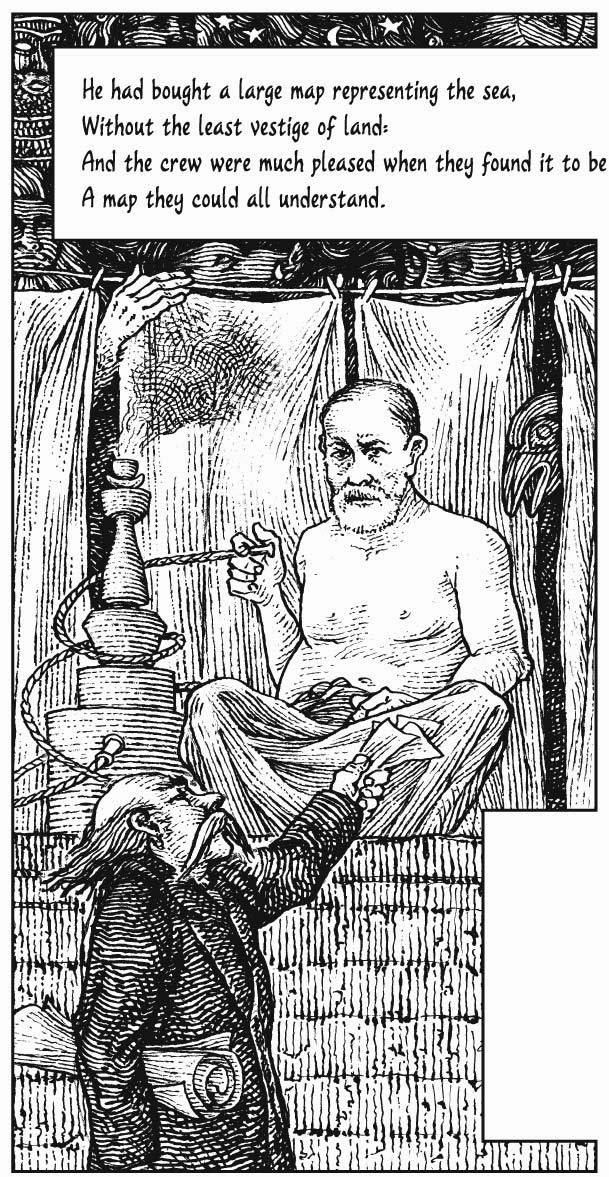 The original illustration by Holiday of this Universal Map is, to be honest, a little trite. It's obvious that the poor man was trying to economize on india ink and pen nibs. However, as the 11th Commandment reminds us: thou shalt not speak ill of another artist, particularly when they are dead and defenseless (the precise state in which their work is best appreciated and appreciates best).

But still … it was obvious … too obvious, perhaps. All the better for my class of readers! Starting with a gratuitious insult to Henry Holiday I had mentally arrived at a hookah-puffing Jewish savant peddling obscurantism to a witless Bellman in a Cairene souk. In the distance I could hear the blood-curdling screams of native children conjugating French verbs. I paid them no heed! I bent over my drawing board, pen in hand, my thoughts feverishly coagulating in a vivid mental maelstrom of mixed metaphors and incongruous images! Two weeks ago I couldn't even spell "artist", now I are one! 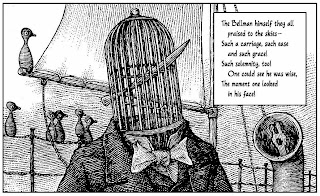 There are some who might say this artist's conception of the Bellman is a base and underhanded attack upon the same, suggesting as it does that the Bellman was literally birdbrained and furthermore, that his colleagues (depicted here and here) possessed the collective wisdom and general prescience of a flock of chickens on the way to the abattoir.

But this is not the case.

I put it to you that the English penchant for all things avian is well-known. I put it to you that Lewis Carroll populated his verse and prose with many avian and semi-avian portmanteaux (or portmantanimaux?) such as the Jubjub Bird and the Borogrove.

I put it to you that the Bellman has suffered the ill-effects of a Violent Unknown Event and that he has metamorphasized into an avian state common amongst avant-garde English cineastes. The wisdom on his face is actually the smug look of a sporting wallah who finally knows for certain which came first, the chicken or the egg.

Posted by Mahendra Singh at 9:46 AM No comments:

Cry havoc and let slip the snarks of war 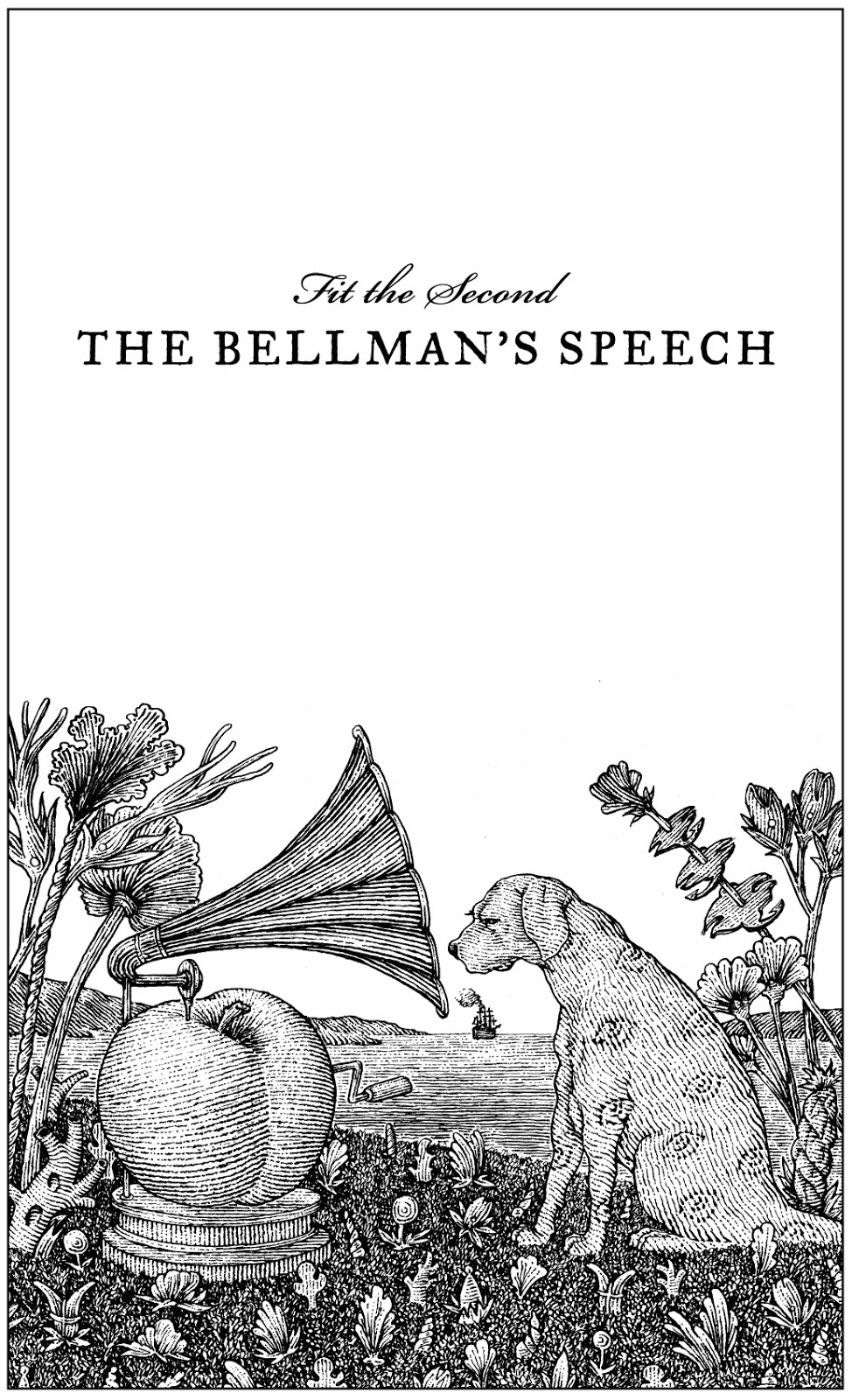 Each Fit begins with a frontispiece involving a pun of some sort — the feebler the better — and a clumsily hidden depiction of the Snark. Alert readers will remember that the Snark is I, hence, the Snark as Eye is liberally scattered throughout the book. Less alert readers can look it all up on google.

The Bellman's speech is of that particular British provenance yclept "fruity". Not so much "plummy" but rather … "peachy". If one removes the fuzzy skin thereof (the burr, so to speak) one is left with a nectarine. This fruit (spelled n-e-c-t-a-r-i-n-e but pronounced "stuffed cabbage") was the preferred nutrition of most cavemen and it was they who first domesticated the dog.

We see here a sample of that species, a young pup named Laelaps, who attends upon his master's fruity voice. And what does he hear? A sonorous mussitation which leaves no impression upon him at all, for, as Thomas Aquinas noted, dogs have no souls. Hence their proverbial high fidelity is but a marketing ploy.

A dog, a peach, a gramophone — after all these years, my own 3-piece jazz combo! At last, I can take a bath. And just in time too, my gin-driven ink-pen's almost run dry.
Posted by Mahendra Singh at 8:11 AM 2 comments: