Profiles in Nonsense: The Billiard-Marker 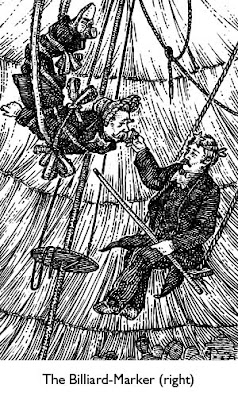 This week’s episode of The Hunting of the Snark is pleased to present you with Snark Hunter Number Six, the Billiard-Marker!

When the Billiard-Marker is not busying himself keeping score in Victorian pool-halls, he’s available for cameo, walk-on roles in such popular thrillers as Conan Doyle’s "The Greek Interpreter ", where he appeared as an extra in a scene involving Sherlock Holmes, Mycroft Holmes and the Boots (duly noted by Martin Gardner, the Herodotus of Snarkology).

Keen-eyed Snark watchers will also remember his scene-stealing appearance in Fit the Fourth of The Hunting of the Snark, where he chalked the tip of the Bonnet’s nose, with hilariously predictable results as we can see in this illustration.

In his spare time, the Billiard-Marker enjoys gardening, cooking, reading the novels of Pierre Loti and attending Carrollian events dressed up as Raymond Roussel, the French novelist and poet whom Louis Aragon dubbed "the president of the republic of dreams." The Billard-Marker has garnered numerous awards and citations for his pitch-perfect, Rousselian rendition of le non-sens haut …

"I shall reach the heights; I was born for dazzling glory. It may be long in coming, but I shall have greater glory than that of Victor Hugo or Napoleon … This glory will reflect on all my works without exception; it will cast itself on all the events of my life … no author has been or can be superior to me … as the poet said, you feel a burning sensation at your brow. I felt once that there was a star at my brow and I shall never forget it." 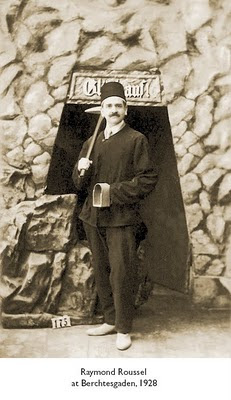 The Billiard-Marker has been known to finish up his Rousselian "performances" by placing a hot casserole dish upon his head and then mailing electric heaters to any friends desiring souvenirs of tropical India, all whilst employing detective agencies to search out and hire suitable illustrators for an alexandrine, protohypertextual epic endowed with a crushing five-fold level of nesting texts.

We’ll be right back with our first question for the Billiard-Marker, after this important message …
Posted by Mahendra Singh at 9:28 AM No comments:

Profiles in Nonsense: The Broker AKA Erik Satie 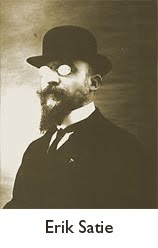 The Broker’s resemblance to the French musical gadfly, Erik Satie, is compelling evidence of something or the other. The Assamese nautch girl in charge of the investigation managed to curtail her lascivious gyrations long enough to unearth further details of Satie’s involvement in late Victorian financial nonsense:

Conclusion? Don’t be fooled by the sloppily inked moustache and glasses, nor even by the phony, Brad-Pitt-style French accent — Erik Satie was a dangerous character and unsafe in elevators and department stores, with or without Muzak. His appearance in this version of the Snark as the Broker is a shocking reminder of the grim human cost of applying Carrollian Nonsense to global financial strategies. In a world where millionaires weep, we all weep!
Posted by Mahendra Singh at 11:32 AM No comments:

Profiles in Nonsense: Boot of the Brute 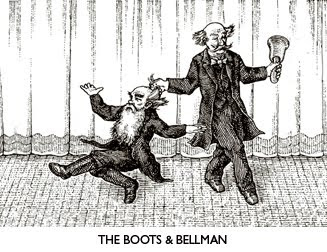 Melville House is the publisher of my GN version of The Hunting of the Snark, which
makes perfect sense when one considers that their eponymous hero, Herman Melville, knew a thing or two about fruitless quests for annihilating animals. Melville chose to clothe his Boojum in the blubbery lineaments of the fat, white whale, Moby Dick, and he also made certain that the whale's pursuers got a snootful of insane, nonsensical, contradictory ravings from their leader, Cap'n Ahab. In these critical matters, it's quite obvious that Melville was plundering Carroll's Snark in a classic example of what literary scholars call Anachronistic Plagiarism.

None the less, I'm in a forgiving mood today, and so we'll put aside these petty insinuations concerning the Second Greatest American Novel and move on to the far more pressing matter of Snarkian Ontology, exemplified here in the unassuming person of the Boots, seen above. Carroll makes little mention of this rather pedestrian character except for some perfunctory business with a spade in Fit the Fourth, and some commentators have even insinuated that the Boots did not really exist or that he might have been the actual murderer of the Baker, sharing as he does a "Boo" with the dreaded Boojum.

To all that I say phooey. However, drawing phooey is a bit trickier and it was only after considerable research by my crack team of crack-head researchers that we came up with a solution to all of the above: the Boots was Charles Darwin! 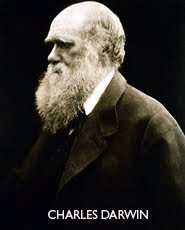 Carroll was probably present at the infamous 1860 debate on Darwinism between T.H. Huxley and Soapy Sam Wilberforce; we know that he owned and read Darwin's works; we even know that he and Darwin corresponded but we are uncertain as to the Great One's exact opinion on Natural Selection.

Well-oiled Carrollians suspect that he disapproved of this logical undoing of the basic tenets of all revealed religions on mainly philosophical grounds. Carroll's faith was unshakeable and more importantly, the Master of Nonsense certainly would have understood the difference between Faith and Logic as far as religions go, a simple mental operation which still seems beyond the limited cognitive abilities of many noisy commentators upon the subject today (so much for evolution, eh?). What might have perturbed Carroll could have been the spectacle of publicly quarreling over such private matters, and hence, our choice of Darwin as the Boots.

Both Darwin and the Boots lurk in the shadows of Victorian England and the Snark alike. The former utterly and categorically demolished the logical basis of organized religion almost apologetically, the latter utterly and categorically demolished the logical basis of Carroll's Snark almost apologetically. Both belief systems of religion and Snark are solely premised upon revelations, the verbal revelations of a god or a poet who presents us with a priori facts about the fictional Multiverses they have created. Carroll's colorless, practically blank persona of the Boots is a dead giveaway that there really is nothing going on here, that the Snark is just a sound and fury signifying nothing.

Nature and poetry alike shun vacuums, they make such an ontological mess of things and clever, up-to-date gods and poets alike eschew 'em. There's nothing worse than Nothing in the midst of your Something, it's a dead giveaway that you really are up to Something and that's the very last thing you want your acolytes and readers to suspect. Fictional suspension of disbelief and all that, don't you know.

In short, there's something going on here, as usual. I'll leave it to the Carroll boffins to sort out the sticky details of all of the above revelations, for now, just take my word for it.
Posted by Mahendra Singh at 9:09 AM No comments: