Fit Three, Page 21, Panel 1 … And did those snarks in ancient time, walk upon England’s mountains green? 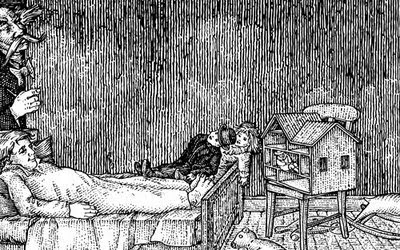 Oh, you silly, mad, impetuous boy of a Bellman, of course you’ve heard it before! Your sense of exactitude may be lacking but as we shall demonstrate, that is mere subterfuge! In fact, our Bellman has a cunning plan … designed to cloak the manicheaen dichotomy of his cryptognostic brainbox with something completely different!

The Bellman’s memory of the Baker’s Snark-Hunting Method (see last week’s verse) has been divided, like William Pitt or George Bush, into two portions to conceal his heretical, dare we say, even paganistic proclivities …

The outer, more orthodox memory is derived from childhood memories of Sunday morning sermonizing at the ol’ vicarage, to wit, Hebrews 12 : 17 …

"For ye know how that afterward, when he would have inherited the blessing, he was rejected: for he found no place of repentance, though he sought it carefully with tears."

However, there is another, more pertinent memory lurking in the wings, a happier memory of family sing-alongs around the parlour piano, to wit, some verses from that favorite Victorian ballad, The Mistletoe Bough …

Nothing much to see here*, folks — until one remembers that the mistletoe is an ancient element of that paganism which was uprooted entirely by the orthodox Christianity which the Bellman supposedly espouses with his first, hebraic memory!

Say it ain’t so, Bellman! Deny, if you can, that what we have here, in this Snark Hunters’ recipe of "seeking-thimbles-care-forks-hope-railway-share-smiles-soap" is nothing less than a Celtic pagan’s verse charm, an Old English galdor in fact, cleverly concealed behind some monotheistic prattle! But he cannot deny, he cannot say it ain’t so, he stands silent.

And so, it is with heavy heart (and light kidneys) that we must unmask the Bellman and show him as he really is — an unrepentant henotheist! All this versified fancypants talk of seeking Snarks is just old-fashioned pagan charm-making — by jove, it’s plain witchcraft! Deny it all you can, Bellman, but shame on you, the fictional creation of a clergyman’s son, for your heathen ways. You and your cabal of backsliding, snark-worshipping, Anglo-Saxon cryptoskálds are found out at last! Go now, skulk in your sordid oak groves …

* There are those quibblers who will insist upon the The Mistletoe Bough's publication date of 1884 rendering null and void all manner of thoughts concerning the influence of Old English poetry upon Lewis Carroll, and in particular, the general, pre-Christian, Northern European penchant for conflating linguistic structure with cosmological structure. I do not know whether the ballad has an older antecedent (I suspect it does, simply because I wish it so) but I do know that Carroll's fascination with linguistic world-play is undeniable and has deep roots in English culture. In addition, I cannot for the life of me remember to whom I must attribute the above Biblical and balladic Snarkological theories to … various pseudonymic postings upon the Lewis Carroll forums to whom I owe great thanks.

There are also those inquisitorial types who will point out that the premise of all of the above theorizing is the precise opposite of last week's theorizing upon the same critical Eighth Stanza. To them I must reply, with all the hauteur and superciliousness I can muster at such short notice — belgium, man, belgium! 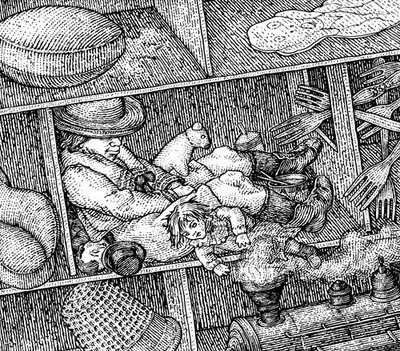 Do not mistake this infamous stanza as a magical refrain or prescription designed by Lewis Carroll to assist the B-Boyz in their Snark hunt, nothing could be further from the truth. Such misthinking is an anthrosemiotic bogeyman put forth by certain academics & philosophes of the Sir James Frazer ilk, Cheapside tailors peddling "ready-made suits" for their naked and the dead.

Consider instead the internal Mind of this poem (yes, there are such boojums), which lives a life independent of its creator, its inhabitants & even its readers. All works of art have these primeval Minds, each according to its national character. The Mind of this poem, being English, roams the midsummer nights daubed in woad, speaks in runes at high tea, shares small beer with the Mind of the Domesday Book and Prospero’s Books in the Mermaid Tavern, and dosses behind hedges with the Mind of Bradshaw’s Railway Guide, a direct descendent of Achilles’ Shield presently down on her luck.

Before you can voice your objections, I must interject — pshaw! Be unperplexed, dear reader! — the Snark and the Mind of The Hunting of the Snark are not the same bestiole. The latter is a deliberate fiction bandied about by Lewis Carroll. The former is the Art behind the fiction — a magic which the Muses have excused from the lie of being truthful.

Oh, ye of too much faith! Can’t you see that all your seeking and hunting and threatening and charming, that all of your sacrifices are meant for you, you alone, that they serve only to distract you from the truth? We heap up our sacrificial relics at the feet of the Mind of the Snark: the thimbles, the cares, the forks and hope, the railway shares, the smiles and soap, all that Victorian bourgeois clutter mouldering in our mental attic — for ourselves only!

Pack up your smiles and soap, abandon all forks and hope, ye überliterati! Repent and understand at last that the Hunting of the Snark is a robinsonade (the mysterious island from whence all Nonsense springs) and that the Mind of the Snark is its pagan god-chieftain at whose feet we pile gifts useful to no one but ourselves.
_____________________

NB. Thanks to Doug Howick for unearthing The Head of a New Zealand Chief … the etymological plot thickens and in my ‘umble opinion there is much more than meets the eye in this illustration’s cutline. And if you cannot discern the difference twixt Art and Fiction, well, that’s your own lookout.
Posted by Mahendra Singh at 6:30 AM 5 comments: 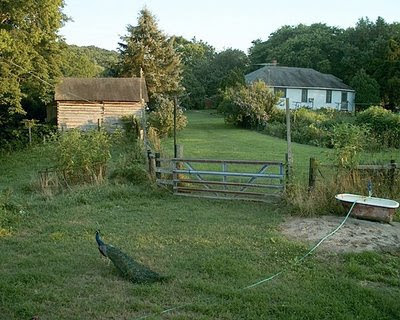 Dear readers, this Snark Hunt must pause for a week whilst we regain our strength by taking the waters (and beers) at Festung Schnark-Sud, ie., the family grange in Virginia. To those who need a quotidian dose of thinkery, I recommend Adam Robert's superb blog. To those with an etymological infestation, Goofy is your man. And finally, I recommend the occluded 'pataphysician, nnyhav, for all other cogitations and flanneries.

Please note the above photograph; some folks say that the peacock is a common cinematic stand-in for boojums. Yow!
Posted by Mahendra Singh at 6:30 AM No comments:

Fit Three, Page 20, Panel 1 … what is it men in SNARK do require? The lineaments of Alimentary Desire 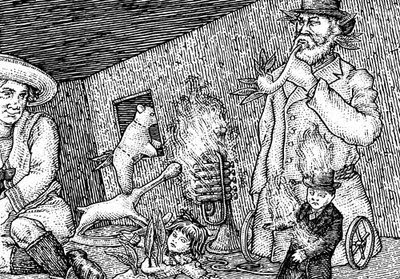 "He remarked to me then," said that mildest of men,
" 'If your Snark be a Snark, that is right:
Fetch it home by all means — you may serve it with greens,
And it's handy for striking a light.

It is an undeniably Gradgrindish Fact that of all the commentaries which I’ve made on this Hunting of the Snark, the most popular by far was the Assamese Snark Curry. Obviously, my readers possess the good taste to delight in the pleasures of both the chase and the table.

The flavor of Snark, being animal, vegetable and mineral all at once, lends itself to all manner of cookery and here at Chez Snarque, we dine on snark in every season and think nothing of it — it is the original slow-food and since the Snark is a beast easily found everywhere, its carbon foot print is the lightest imaginable! The following recipe perfectly captures the flavor and ambience of freshly-caught snark in its South Asian incarnation — you won’t be disappointed!

South Indian Snark Fry
• Fetch to home by any means possible (palanquin, scooter-rickshaw, forkéd stick) approx. 2 lbs. Snark fillets. If your fishmonger has no Snark, use any skinless, boneless, firm-fleshed fish fillets such as tilapia, cod, catfish. Perfectly fresh soft-shell crabs are widely considered to be the best approximation of Snark.
• 2 tablespoons of ground coriander, 1 teaspoon of salt, 1 teaspoon of ground black pepper and as much ground red chili (cayenne) as you care for
• A half-cup of grated onion
• 3 cloves of garlic, grated
• Two tablespoons of vegetable oil
• Sufficient flour to dredge the fillets, a mixture of one-half all-purpose plain flour, one-half corn meal

Combine the spices, grated onion, grated garlic and oil in a non-reactive bowl, then place the snark fillets inside the bowl, making sure that the fillets become thoroughly coated with the mixture. Let stand (refrigerated) for at least an hour or two. When ready to cook, gently dredge the coated fillets in the cornmeal-flour mix, taking care that the onion & spice mix remains on the fillets. Fry them in a pan with sufficient oil at high heat. The crust should be golden brown and if done speedily will not be at all greasy. Serve immediately.

You may indeed serve it with greens such as a simple garden salad. You may also fetch it home in the company of a thoroughly chilled crisp India pale ale. You may even use it for striking a light along with some lime pickle. But if your Snark fry be a Boojum, then just softly and suddenly vanish away … and let that Boojum do the washing-up for a change!

Onward, with forks and hope — to the table!
Posted by Mahendra Singh at 6:30 AM No comments:

Fit Three, Pages 18 and 19 as a Spread … and by this Snark you may contemplate the variation of the 23 letters 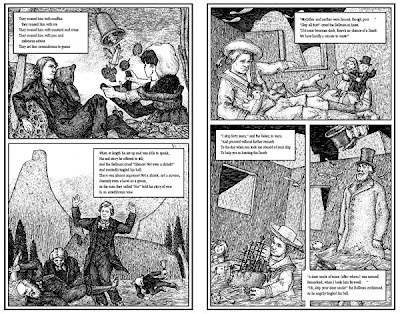 Amidst the spread of these pages, we are lost in the gutter but shall look to the stars …

We are tyrannized by the nostalgic gigantism of the nursery room …

We are the intralapsarians buoyed by the avuncular patter in matters vegetable, animal, and mineral of the very model of a modern Major-General …

In sum, we are hunting a snark … lest a snark hunt us.


NB. A propos of all things Snark, we must take note of the United States Court of Appeals for the District of Columbia Circuit, whose recent opinion regarding the judicial status and disposal of Guantanamo Bay detainees was a stern rebuke to the Clochetic Rule of Three. Whilst the chattering classes harrumph-harrumph and golly-gee-whiz over the audacity of this sudden effloresence of symbolic logic (and invariably describe the Bellman as a madman or worse), the more pensive amongst us will think how it must feel to have one's legal and corporeal fate rest upon the mercy of powerful, humorless men who have just been publicly ridiculed by a well-read, Carrolliphile jurist.

We hunt the Snark for sport lest the Boojum drive us mad in earnest …
Posted by Mahendra Singh at 6:30 AM No comments: