Fit the Fourth, Page 24, Panel 1 … the Bellman never lost so much time as when he submitted to learn of the Baker 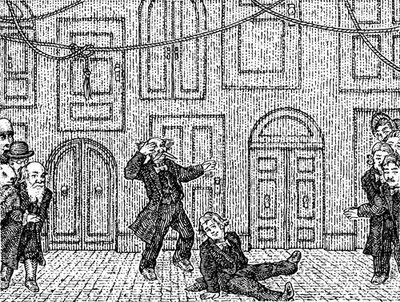 The Bellman looked uffish, and wrinkled his brow.
"If only you’d spoken before!
It’s excessively awkward to mention it now,
With the Snark, so to speak, at the door!
"We should all of us grieve, as you well may believe,
If you never were met with again —
But surely, my man, when the voyage began,
You might have suggested it then?

I submit for your perusal the word uffish in the above lines. Lewis Carroll explained it thus: "it (uffish) seemed to suggest a state of mind when the voice is gruffish, the manner roughish, and the temper huffish."

Yowsuh … I shall put it to you that all this Carrollian neologicomania was nothing more than a clever, crypto-linguistic metatheory (hatched, no doubt, in some "scenic" bathing machine) which attempts to explain the Origin of Language in the Human Species by means of the Clochetic Rule-of-Three!

Simply put, the learned Mister Carroll was pointing out, through repeated utterances of neologisms such as uffish and brillig and Boojum, that whatever we tell one another three times eventually does become true, that is to say, we need look no further for any linguistic First Cause than the simple observation that long, long ago, certain sounds became words through mere repetition. We might even say that sound becomes symbol through repetition, or even better, chaos becomes logic through repetition. So much for the Meaning of Life, the Universe and Everything in It! Mister Carroll seems to have whittled it all down to a proper size, easily digestible and suitable for the masses.

Of course, there are always certain idle loafers lounging in every philosophical woodpile, hairshirt-wallahs such as Ludwig Wittgenstein, who dismissed the linguistic and logical implications of Carroll’s Clochetic Rule-of-Three by sniffing (in German, no less!) that it was as if “someone were to buy several copies of the morning paper to assure himself that what it said was true.”

NB. Needless to say, our prelingual, Adamic ancestors did not read newspapers. They preferred perusing the above drawing and verses, which would have been engraved upon the walls of their semi-Platonic caves. Note carefully the plethora of doors delineated in both. These are the doors of perception, which, if cleansed, would allow everything to appear to the Snark concealed behind each of ‘em as it truly is — infinite! You do realize, don't you, that to these concealed Snarks, we are the concealed infinity behind their doors?
Posted by Mahendra Singh at 6:30 AM 2 comments:

Fit Three, Pages 22 and 23 as a Spread … Work is the curse of the inking classes 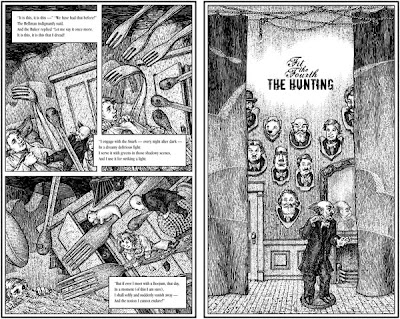 Overheard in a publisher's office …

An Editor: So, this Snark epic you’re pitching, it’s great but we’d like to suggest some minor changes, nothing that will disturb your artistic integrity, of course.
Ink-stained Wretch: Muffled sigh
An Editor: Everybody's name begins with the letter B which is a nice touch, not too elitist … a few additions perhaps, relevance-wise … Basketball Player … Barista … Business Development Consultant … Bratz® …
Ink-stained Wretch: Strangled groan
An Editor: About the author, we’ve googled him and it appears that there is some controversy about his identity. Sort of like Shakespeare, which we think is a neat added uplift viral-marketing-wise … for example, a hotlink, like … who was the real Louis Carroll — Francis Bacon?
Ink-stained Wretch: Incoherent sob
An Editor: Now, correct me if I’m wrong here but I got the impression that by the end of the book the good guy is destroyed by this imaginary animal, the Boojum. This word Boojum, it sounds somewhat foreign … it might give offense so our attorneys have suggested that we use the name Bunbury instead, which is super because it sounds really WASP and nonthreatening, like a fresh doughnut or a nice cozy raincoat. Nobody's burnt down an embassy over a hot doughnut … yet …
Ink-stained Wretch: Effete snarling
An Editor: Plus, we also noticed that it’s a poem, perhaps we should rework that a bit, kids hate real poetry, maybe give it a kind of hip-hop jive-street smack-down feel? That would synergize great with the Basketball Player and the Barista and the Bratz®.
Ink-stained Wretch: Herniated shriek
An Editor: And yeah, we love your drawings, do you do them by hand? They’re so retro which is really in right now except that you do realize that a retro style necessitates a retro fee? We were thinking perhaps a hand-made drawing of a xerox of a fax of a photoshopped picture of an actual check. We've gone over all that with your agent already.
Ink-stained Wretch: Meek purring
Posted by Mahendra Singh at 6:30 AM No comments:

Email ThisBlogThis!Share to TwitterShare to FacebookShare to Pinterest
Labels: Francis Bacon, The Vicissitudes of the Publishing Industry 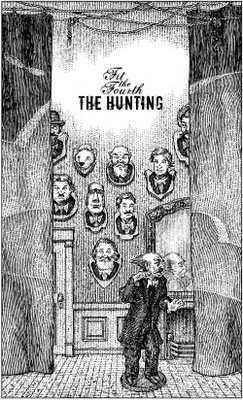 After a successful hunting, one is always left with the remains of the dead, even in Lewis Carroll’s genteel, literary world. In this, the frontispiece to Fit the Fourth, we see the remains of a particularly jolly hunting, stuffed and mounted upon the wall of a certain someone’s hunting lodge.* The Bellman looks particularly splendid and lifelike and for those of us who keep track of such matters, the Snark-is-Eye Leitmotif can be discerned through the looking glass.

Certain folk say that is in bad taste to speak ill of the dead. Others look askance at their being stuffed and mounted upon a wall. Still others abhor those other who look askance. I place myself in the rarefied category of those who loudly proclaim that if the dead are too lazy to do anything for themselves it’s their own look-out and certainly not the business of the government! Harrumph!

Look, look there, at that uppermost head in the middle … why, it’s the Boots-cum-Charles-Darwin … what grotesque sense of humor put him there? Was it one of those Literary Darwinists? — they’re all the rage now! Lurking behind every poem and novel and feuilleton, we find these semiotifetishians who ascribe the most salacious evolutionary motives to every author — and yes, every reader! Oh the times, oh, the customs, when the reader is being read, the author is being authored, and yes … the hunter is being hunted!

I could go on like this for some time now but all this thinkery-inkery is really a bit taxing; I‘d rather be outside in the fresh autumnal air, grouse-hunting from a helicopter or seal-clubbing till midnight or whatever it is that we must do for sport in these oddly unimaginative antinomian times.


Nota bene! The Lewis Carroll Society of North America has very kindly invited me to give a talk about this version of the Snark at their next meeting in NYC, October 25th, 2008. For further details, download the indicated PDF in the Meeting Section of the LCSNA site. The event has several other very interesting speakers scheduled and promises to be a rare treat for all concerned. As for myself, I am having Gussie Fink-Nottle-type anxieties of the Market Snodsbury Grammar School+cheap gin+orange juice species, but I'm sure that the good people of the LCSNA know what they're doing under the circs.


*The reader should note that this is the only time in 140 years that an illustrator has dared to depict the interior of a Snark’s lair. Note the threadbare furnishings, cheap wooden flooring and fusty curtains — economy is certainly our Snark’s watchword! I have heard it said that he was once a Park Avenue Snark but now prefers to be known as a Small Town Snark. So be it, one must trim one’s sails to whatever flatulence is being emitted from the Body Politic!
Posted by Mahendra Singh at 6:30 AM No comments: 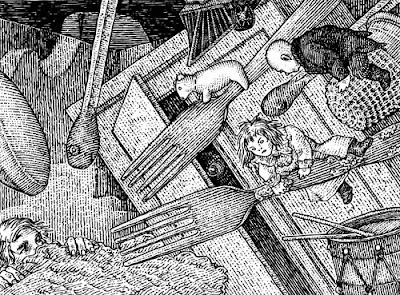 "But if ever I meet with a Boojum, that day,
In a moment (of this I am sure),
I shall softly and suddenly vanish away —
And the notion I cannot endure!"

The last, fateful words of the Baker-cum-Lewis-Carroll before he is smothered by the inky depths of the night, suffocated by the relentless Amorous Gigantism of Inanimate Things, transfixed by the icy glare of the Snark-Is-Eye lurking in the wardrobe — obliterated, in short, by his memories of the future!

This whole Boojum business is what literary boffins like to call Catharsis, a purging and expelling of unsettling emotions, a process which results in a post-Boojum state of relaxation, mental ease, gleaming white teeth and little or no underarm perspiration. In this state of enlightenment all of one’s troubles softly and suddenly vanish away and one is left with only the minty fresh after-taste of … Boojum-Orientalism!

Boojum-Orientalism is fundamentally a political doctrine willed over the Boojum because the Boojum is weaker than the Baker, a doctrine which elides the Boojum’s difference with its weakness. . . . as a cultural apparatus Boojum-Orientalism is all aggression, activity, judgment, will-to-truth, and knowledge … the whole point about this system is not that it is a misrepresentation of some Boojumistic essence — in which I do not for a moment believe — but that it operates as representations usually do, for a purpose, according to a tendency, in a specific historical, intellectual, and even economic setting …

All hail the postsemiotic Second-Grade-Fresh-New-World-Order! Aided only by my trusty giant power-packed pen and buckets of thick, reheated cafeteria-style ink, I have deconstructed a Boojum-ridden, prostrate Baker into a resurgent postcolonial Boojum reasserting his alienated Snarkhood and casting aside the dehumanizing typology of the oppressive Victorian bourgeois Snark Hunter … (pauses for breath) …

… hurrah for the disappearance of the Author-Function! Hurrah for the justified tyranny of the Reader-Boojum! Hurrah for everybody!
Posted by Mahendra Singh at 6:30 AM 5 comments: