"For England expects — I forbear to proceed:
‘Tis a maxim tremendous, but trite:
And you’d best be unpacking the things that you need
To rig yourselves out for the fight. "

Huzzah! England expects the Bellman to insert his bell into his right eye. The Bellman promptly complies! Certain idle loafers might insinuate that he does so to ignore a signal ordering his withdrawal during the Battle of Copenhagen but the Bellman doesn’t give a fig for such talk. In fact, having lost the use of his right eye in Corsica, the addition of a large bell into the useless socket gives him a certain rakish, clochetic look which has proved quite popular with the ladies, in particular, the lovely Lady Emma Hamilton! Imagine her surprise when she discovered afterwards that the Bellman had bequeathed her to the British nation in a codicil of his will!

But her dismay was nothing compared to that of Lewis Carroll, the author of this very Snark Hunt! Imagine his surprise when he discovered that his amanuensis (and rather louche business manager) Charles Lutwidge Dodgson was a maternal great-great-nephew of Admiral Skeffington Ludwidge, upon whose ship HMS Carcass a young midshipman named Horatio Nelson began his storied career … a career which included Nelson’s loss of an eye in Corsica … the disregarding of signals during the Battle of Copenhagen … and even the transferral of a Lady Hamilton to a grateful though perplexed nation.

Simple coincidence? I think not! I think what we have here is a Snark Hunt of staggeringly devious complexity, an insidious cabal hatched forth in the shadowed lair of an occluded Illuminati who will stop at nothing (cue evil laughter) … And so I say to you, gentle reader : steady on there, old chap, stiff upper lip and all that! Remember that whenever he (or she) is confronted by hopeless odds, the True Snark Hunter expects every man to do his duty!

Hip hip hooray! Rum and coke for all ratings on deck! 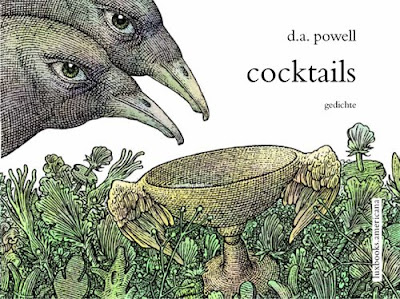 NB. Cocktails, a collection of D.A. Powell's poetry, has just been published by Luxbooks (scroll down to the next-to-last title). This new translation into German, including the entire English text en verso, is accompanied by cover & interior illustrations by yours truly.

D.A. Powell has a rare gift for pushing language towards its farthest limits without lapsing into academic gimmickry or sentimentality and I genuinely recommend his work … so much so that I must forcefully urge you to spend what little cash you have left in purchasing as many copies as possible of this rather unusual volume. Both Luxbooks and Amazon-Deutschland are offering the book — you could easily spend with twice the abandon! Throw caution to the winds this holiday season, like those Wall Street tycoons upon whose largesse we all depend! Io, Saturnalia!

"For the Snark’s a peculiar creature, that won’t
Be caught in a commonplace way.
Do all that you know, and try all that you don’t:
Not a chance must be wasted to-day!

Our favorite poet and Eminent Victorian Lewis Carroll has given us the late 19th-century equivalent of certain ubiquitious American psychobabbitries : do all that you know and try all that you don’t.

A peculiar prescription for a peculiar creature, a call of sorts to a half-hearted High Anglican Debauchery aimed at the titillation of the thinking classes. And what titillates the thinking (and unthinking) classes the very most? What is it they dream of, with their eyes wide shut … is it the Female of the Species?

Most likely. And shame on ‘em too, boo hiss boo! Objectifying women with their shameless gaze! These Surrealists, they are a menace to polite society in every city and a blight upon the land in every which way.

They are utterly unlike the respectable, petit-bourgeois Protosurrealist Snark-Hunters whom we see above, scrupulously averting their reifying gaze from La Snarque Nue concealed from them in my forest of lines. Would it surprise you to learn that I have entirely drawn the above with my eyes also firmly shut, trusting only in the animal-instincts of my feral pen to guide me safely through the labyrinth of lines in which the Snark has so cunningly concealed herself?
Posted by Mahendra Singh at 6:30 AM 2 comments: 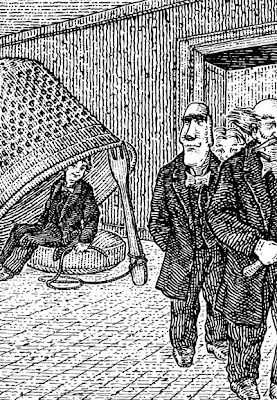 "To seek it with thimbles, to seek it with care;
To pursue it with forks and hope;
To threaten its life with a railway-share;
To charm it with smiles and soap!

A reiteration of the Snarkic Galdor … a type of verse-charm first overheard by the poet Lewis Carroll whilst sipping his tea and mentally searching for rhymes in the commons room of Christ Church College in the depths of the latter half of the 19th century. No doubt Carroll was puzzled by this sudden outbreak of cryptoskáldic fervour in what was then a bastion of High Church Anglicanism but he was a discreet man and kept his thoughts to himself.

However, I am congenitally incapable of keeping any thoughts to myself! At this very moment I am mentally whirling along certain transient nodes of thought careening through a cosmic vapor of invention, as the infamous Hedly Lamar once pensed aloud to the uncomprehending Slim Pickens.

Unlike Slim Pickens, gentle readers, you will easily grasp the essence of my thoughts, which I’ve thoroughly illustrated above. The Snarkic Galdor is baited, literally, with the tempting person of the Baker himself! Lured by his smile and a bar of soap, the unsuspecting Snark will venture underneath the requisite giant thimble and then be trapped there by the quick and concerted action of the Baker’s Fellows!

The Baker’s transient nodes of thought on the matter can only be guessed at. However, thanks to the learned Adam Roberts’ ingeniously cosmic vapors of invention, we now know that the Baker’s earlier polylingual attempts at communication with his fellow B-Boyz (see Page 25, Panel 2) were simply an enunciation of the observation that Humanorum hetaeria es auto (you are yourself the brotherhood of all men). His comrades have taken this generous, fraternal gesture of self-sacrifice on the Baker’s part as carte blanche to proffer him up as living Snark-Bait.

This business of offering oneself up as a bait for Evil must inevitably occupy the whirling, transient thought-nodes of anyone enjoying his tiffin at the aptly-named Christ Church College. Perhaps, as Carroll munched his bread and butter sandwiches and plotted his rhymes, he was entertaining first, second or even third thoughts about his own personal Boojums … or perhaps he was merely biding his time till the invention of the talking-type-wireless with which the ubiquitious Slim Pickens would finally set all of his religious doubts to rest!
Posted by Mahendra Singh at 6:30 AM No comments: 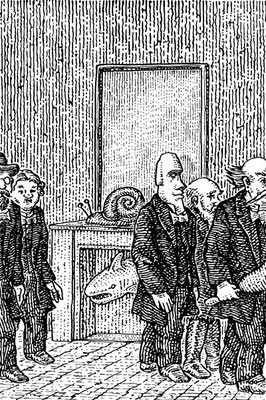 "The rest of my speech" (he explained to his men)
"You shall hear when I’ve leisure to speak it.
But the Snark is at hand, let me tell you again!
‘Tis your glorious duty to seek it!

We have already nibbled upon — and spurned! — Beatrice Hatch’s assertion that Lewis Carroll had told her that the word Snark was a portmanteau of Snail and Shark. The etymology of the Snark is an entire Hunt unto itself (excellently summarized by the inestimable Bradshaw of the Future) but it seems that we are running perilously low on bullets, tinned goods and scotch-soaked mosquito netting, or so my faithful shikaris tell me … we had better return to civilization, such as it is, and seek our Snark indoors … such as these Snark Hunters pictured above are doing.

Please observe that these Hunters are relying solely upon their finely-tuned instincts to track down their perilous prey and as usual, everything’s become a hopeless jumble! The afore-mentioned Beatrice Hatch’s semiolinguistic brain-crumbs have joined in an unholy alliance with the semiographic cupcakes of the Belgian pâtissier (and chronophobe) René Magritte to create a novel yet frothy confection! Of course, such half-baked baked-goods would be incomplete without some of that double-plus-good explanatory frosting which the Critics love so; I append an explanatory (and thoroughly plagiarized) morsel here:

"I decided to paint the image of a shark . . . In order for its mystery to be evoked, another immediately familiar image without mystery — the image of a snail — was joined."

Well, there you have it : an Indo-Germanic-Belgo-Anglo-Saxon layer cake of ink and words … I call it Beatrice’s Revenge, for it’s a rather heterogenous and unsettling dish best served cold, perhaps as an after-dinner dessert? Of course, Lewis Carroll’s original photographic bonbon of Miss Hatch was also a bit cloying but certain artists will always indulge their sweet-tooths! 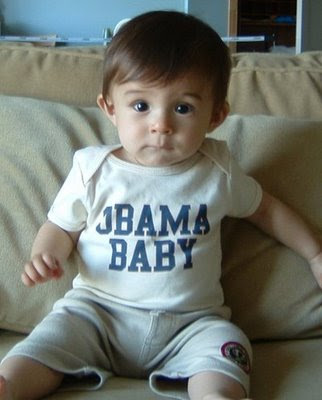 NB. Please, America, do not crush my young nephew Leopold’s already shaken faith in The System — vote early and vote often!
Posted by Mahendra Singh at 6:00 AM 2 comments: