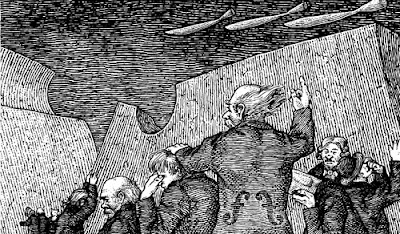 The Bellman perceived that their spirits were low,
And repeated in musical tone
Some jokes he had kept for a season of woe —
But the crew would do nothing but groan.


Jokes kept for a season of woe, an almost biblical undertaking on the part of the Bellman, whose storehouse of mirth has been sorely depleted by divers chasms and crags. But to this geologically disheartened hunter of the Snark, we say, in the finest demotic vulgate we can muster : lighten up, dude! Like, get a hobby!

But the Bellman knows it will never work out. From the vantage point of his solitary table in a dark corner, he sighs aloud and weeps a solitary English tear into his hemlock and branch water. He knows he’s the wisest man in the place, simply because he’s the only one aware of his own ignorance. That and the numbness creeping up his legs … and up his back …


NB. A tip o’ the poutine-sodden solar-topee to the Poetry Foundation, who have very kindly furnished their readers with a link to this Snark Hunt. Comix lovers should reciprocate with a look at the Poetry Foundation’s on-going series, The Poem As Comic Strip. It’s an encouraging development in the often overly-commercial world of sequential art and deserves more attention and hopefully, imitation and expansion. Besides, poets are even lower than ink-stained illustrators on the capitalist food-chain, they deserve a respite.
Posted by Mahendra Singh at 6:40 PM No comments: 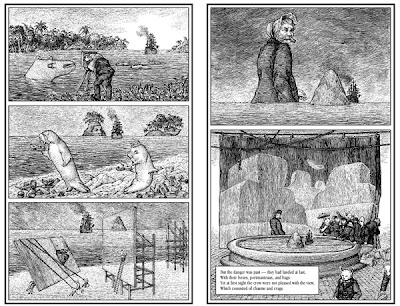 The languid pacing and incongruous imagery of this Fit, exemplified in the cunningly delineated page-spread seen above, is a perfect example of what a recent edition of a certain Canadian newspaper’s Book Review referred to as a "posthumuous collaboration". I must tip the soiled brim of my sauerbraten-stained turban-cum-tuque in genuine respect at the linguistic dexterity of the joining-together-today-in-the-sight-of-god-and-man-of-these-two-words: posthumuous collaboration.

The mind boggles. But afterwards, it resumes its reconsiderations and rereflections. Must it cavil and carp so? Is not a posthumuous collaboration with the dead also the postmortem plagiarism of the dead upon the living? Or perhaps even the prenatal borrowings of the as-yet-unborn intra-reincarnative? In fact, dear reader, may we not say, in truth, that all art is but a posthumuous collaboration with a penurious but talented past, an artists’ community of the not-so-grateful-dead which is willing to overlook our modern deficiencies as long as the check is in the mail?

For too long, certain narrow-minded artists have Canadianized the living and the dead into twin solitudes. Pshaw to all that! As the late, great, Douglas Adams* once noted, life is wasted on the living. It’s high time we frittered away the time and energies of the dead! Tally ho to posthumuous collaboration and the Boojum of Originality!

* Mister Adams was gracious enough to assent to a prior posthumuous collaboration with me, vide Fit One, Page Four, Panel Two. And as nyhav (an occluded 'pataphysician, I suspect) astutely noted earlier, Protosurrealism is in many respects a posthumuous collaboration with Alfred Jarry. However, it shall be noted that Protosurrealism intellectually predates ‘Pataphysics, an anachronistic precaution necessary to create that frisson of uncertainty as to who is colloborating with whom … and who is post- and who is pre-mortem.

NB. I encourage all readers interested in Lewis Carroll to visit and bookmark the newly-launched blog, Let "Universe" Be "Books", a production of the associate editor of the LCSNA's "Knight Letter Journal". Onwards and upwards, with forks and hope! 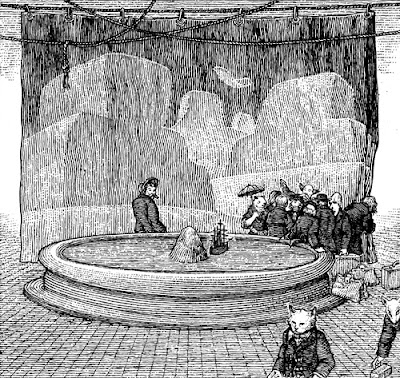 But the danger was past — they had landed at last,
With their boxes, portmanteaus, and bags:
Yet at first sight the crew were not pleased with the view,
Which consisted of chasms and crags.

All the world’s a stage and all the men and women merely Snark hunters: they have their exits and their entrances; and one Bellman in his time plays many parts, his acts being eight Fits. Today being the feast-day of St. Valentine (patron saint of lovers and apiarists), we have arranged things so that our decahedroid players shall now disembark into a romantic comedy of the sort calculated to warm the cockles of even a Boojum’s heart.

I say pshaw to the critics, the play's the thing! When confronted by such dismal antivalentinians we must follow the sterling example of the sublime Mr. Herriman and summon the local gendarmerie! Offisa Pup, take ‘em away, the l’il dahlinks! Yezzah …
Posted by Mahendra Singh at 7:00 AM No comments: 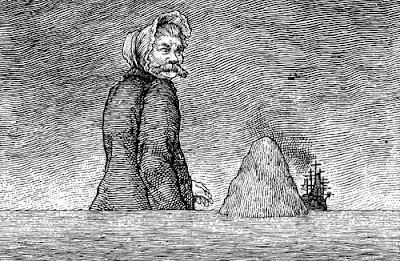 **Black Letters Unleashed: 300 Years of Enthused Writing in German, Ed. by Malcolm Green, Atlas Press, London, 1989. Do we detect the perfectly light and razor-sharp touch of Robert Walser in these sad lines? Walser … the only genuine heir to Cervantes of the last century (and both of them the definitive book-ends to European literature) … oh, these delicious literary bread-crumbs with which we encrust our Wiener Schnitzel of postpostmodern protosurrealist angst!
Posted by Mahendra Singh at 7:26 AM 2 comments: