Fit the Fourth and the LCSNA … we few, we happy few, we band of snark-hunters

The above page-spread serves as a perfect visual embellishment to my delightful experiences at the LCSNA meeting last Saturday! We see above, in order, a harmless theatrical pratfall, a gathering of urbane galants, a solipsistic-Carrollian-multiverse, some linguistic child’s play and finally, the Harmonious Genius of a SNARK-HUNTER Triumphant O’er the Unruly Debates of the Unenlightened.

A perfect visual allegory for the goings-on in NYC! And for all of this, I owe great thanks to Andrew Sellon and August and Clare Imholtz, for inviting me and giving me the chance to meet and listen to the following …

• Jon Scieszka, who’s done a new version of AIW, using the formerly unpublished comps of Mary Blair. The comps are quite good, better, in my opinion, than the finished backgrounds and characters that Disney used in the film, far more expressive and personal. Jon is also the U.S. National Ambassador for Young People's Literature, a noble cause for which he is perfectly suited. I cannot imagine a child exposed to Jon’s ebullient enthusiasm daring not to read!

• Nancy Willard, children’s author and educator. Nancy, who wrote the award-winning A Visit to William Blake's Inn, talked about the narrative techniques of Carroll and how he made children’s literature more intimate and realistic, both technically and emotionally.

• Peter Westergaard, who gave a detailed explanation of how he encoded Carrollian motifs into the structure of his latest opera, Alice in Wonderland. I really enjoyed his music and also the shoptalk, as it were, of a complex process which has so many parallels with what I’m trying to do with this Snark. I am unable to find any samples of this work on the web and if anyone does so, perhaps they could contact me?

I also must recommend the work of Oleg Lipchenko, who showed me a sample of his luscious AIW, and also allowed me to see a dummy of his Humpty Dumpty, which made me seethe a bit with goodnatured envy. I also met Tatiana Ianovskaia, who also is doing some really charming Alice work. Curious that all the illustrators present were Canadian …

In talking with the marvelous Scott Edelman, we both realized that we had been doing work for the same various publishers and magazines (Fantagraphics and Sovereign Media) since the mid 80s, which goes to show how small the publishing industry really is … yikes!

In truth, there was little Snarkian banter all-in-all but I did have the frisson of talking Snark with the poet Matt Demakos at lunch … oh, the decadent, nay, heady thrill of discussing Snarkian anapests, headless and headed, over a meal in Sin City itself!

I also met the genuinely learned Dave Haan, of Stochastic Bookmark, who very generously bestowed upon me several books of oulipian, ‘pataphysical and surrealist nature! The idea of an oulipian translation of Carroll has long intrigued me … Dave may have set in motion events which will irk future Carrollians for centuries to come!

And so, speaking of books, they are the genuine coin of our Snarkian realm. I met Monica Edinger, the educator and author, whose blog deals with the intellectual and emotional transactions between books and children. Although my Snark does jest and hoot and make rude noises at times, there is a serious purpose to all this tomfoolery : to intrigue people — young people especially — enough to further search out, on their own, the various spoors and traces that my Snark leaves behind as it evades its own Hunters!

Next Week : America Elects the Next Leader of the World’s Only Remaining Superduper Power … while I Make a Drawing of a Giant Snail Poised to Take Over and Annihilate Guildford, Surrey!
Posted by Mahendra Singh at 11:23 AM 2 comments:

Fit the Fourth, Page 25, Panel 3 … when they talk’d of their Raphaels, Correggios & stuff, he shifted his boojum & only took snuff 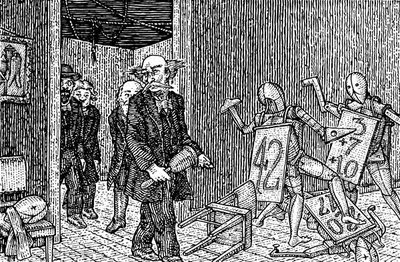 "’Tis a pitiful tale," said the Bellman, whose face
Had grown longer at every word:
"But, now that you’ve stated the whole of your case,
More debate would be simply absurd.

There comes a time when even poets such as the Talented Mister Lewis Carroll draw a blank, as the saying goes. Yet such deficiencies seem to have not bothered him a jot or tottle in the long run; he simply brewed up a fresh pot of tea, chewed reflectively upon his quid of paan and sooner or later, he would come up with the poetical goods and fend off the Boojums at the door.

However, when an ink-slinging wretch such as I draws a blank, adverse professional consequences can result. Drawing a blank may be suitable behaviour for those blessed artistes who frolic in the Elysian Fields of MOMA or the Tate but for us illustrative hacks bent over our drawing boards in the sweaty back-forty of Dante’s Inferno (Circle 8, Subsection 5, Barrators and Flatulants) such antics are the stuff of which bankruptcies are made of.

When deadlines press and the ol’ brainbox is running on fumes, remember the scuola metafisica’s dictum to draw only that which cannot be seen. The main thing is to keep one's pen busy, just bash on regardless, no thinking required … always bear in mind the words of a certain master debater and politician who once declared that he did not care what the facts were.

Who can argue with that, eh?


The Lewis Carroll Society of North America has very kindly invited me to give a talk about this version of the Snark at their next meeting in NYC, October 25th, 2008. For further details, download the indicated PDF in the Meeting Section of the LCSNA site. The event has several other very interesting speakers scheduled and promises to be a rare treat for all concerned. As for myself, I am having Gussie Fink-Nottle-type anxieties of the Market Snodsbury Grammar School+cheap gin+orange juice species, but I'm sure that the good people of the LCSNA know what they're doing under the circs.

"I said it in Hebrew — I said it in Dutch —
I said it in German and Greek:
But I wholly forgot (and it vexes me much)
That English is what you speak!"

These headless anapaests of Lewis Carroll rollick onwards in their frolicksome procession and who are we to deny their cantering allure? Of course, the essence of an anapaest is the idea of a reversal and what better expresses the idea of reversal than the dawning realization that one is speaking in a language that no one understands? The unfortunate Baker is quite literally going backwards as the sense of what he says is instantly transformed into nonsense by his puzzled auditors.

Snarkologists call this sort of thing the Snarkosocratic Method, a kind of dialectic in which a question is responded to as though it were absolute nonsense. This in turn forces the questioner to endlessly repeat himself until his uncomprehending auditors gradually lose interest and finally go away.

Left alone in his splendidly impenetrable semiolinguistic Fortress of Solitude, the Baker is now free to concentrate his intellectual powers upon himself. Toying with the building-blocks of language and meaning, he will arrive at some sort of Answer to Life, the Universe and Everything in It … eventually …
Posted by Mahendra Singh at 6:30 AM No comments:

Fit the Fourth, Page 25, Panel 1 … Colonel Mustard, in the sitting room, with a blunt boojum

"You may charge me with murder — or want of sense —
(We are all of us weak at times):
But the slightest approach to a false pretence
Was never among my crimes!

False pretences are the bane of modern life or so I’m told. Although Lewis Carroll seems to have composed here an entire poem devolving entirely from the concept of false pretences and all the semiotic and logical heartache they can inflict upon the tender-hearted and tender-brained, in our more louche age the concept of false pretences has inspired instead a steady diet of policiers, bodice-ripping Mills & Boons and true-life confessional serial-killer-self-help-vademeca.

Very well, let the masses have their sensationalist Lewis Carroll, their police gazette Hunting of the Snark! If it’s murder and false pretences they want, let ‘em have it!

The heart of the problem, as I saw it, was to produce a drawing with a maximum of false pretensions and a minimum of actual labor. My eyes fell upon a tattered copy of a magazine, replete with the Finest Truths the American Dollar Can Currently Buy … a magazine whose pages proclaimed the news of a certain artist skilled in the arts of portraiture, whose devotion to their practice was such that they could not bear to paint any more than one face, over and over and over, varying only the sitter’s name and the precise location of the bank in which they deposited the princely sums lavished upon them by an extremely sophisticated clientele.

Gosh! Throwing caution to the winds, I brushed aside my idly gyrating Assamese nautch girl, recklessly purchased an entire sheet of second-grade-fresh bristol board and pushed another quarter into the meter of my steam-driven pencil! Working without respite, I labored to flesh out the Baker’s criminal pretence, multiplying his crypto-Carrollian visage seven-fold!

Huzzah for the critics! In a world of false pretences, who is the menaced assassin and who is the menacing victim now? Look out, New York art-wallahs, here comes a real maverick!
Posted by Mahendra Singh at 6:30 AM 3 comments: 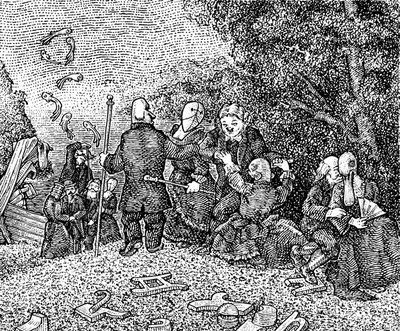 "It’s excessively awkward to mention it now—
As I think I’ve already remarked."
And the man they called "Hi!" replied, with a sigh,
"I informed you the day we embarked.

A strange brew: a pastoral melancholy of the gods resurgent, a fête galant of the ancien regime, the reveries of Lewis Carroll and an obscure illustrator.

The Fellowship of the Snark has succumbed to the most delicious ennui, the most languid douceur possible … it is impossible, amidst the heady scent of perfumed bowers and amorous glances, to even speak that hateful word Boojum … far easier for the Boots to nibble on his ladylove’s niobic neck, far easier for the Butcher to lead the gallant company of andromachean mannequins and embryonic homunculi down the verdant lawn towards the wondrous, gilded barge whose pilot, the Bellman, will steer them to the sanctuary of Cythera, that isle of enchantment where all things distasteful softly and suddenly abrade away into their constituent semioglyphs …
________________

Attention U.S. illustrators, photographers and designers: whilst the American public's hit-and-miss attention is focussed on the financial brouhaha in Congress, the Orphan Works Bill is speeding its way to a final vote. This bill is a blunt instrument crafted by various business interests for the purpose of optimizing their legal right to pay creatives as little as possible. Our ability to defend and profit from our copyrights will depend entirely on our financial ability to hire sufficient legal talent to enforce "reasonable diligence" in court(s) after the fact, a hopelessly abstract right indeed! If you wish to contact your congressman and express your displeasure to him or her concerning this bill, go here.
Posted by Mahendra Singh at 6:30 AM 1 comment: