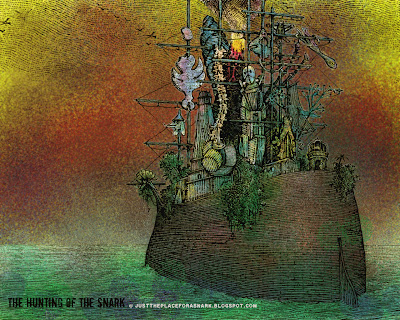 Snark hunting is passé this festive week, this being a time of general goodwill and peace on earth, etc. Hunting anything with forks and hope is right out, which should be a comfort to all Snarks wishing to take a few days off with their families.

And I'm certain that all such nonsensical beasts would express along with me (if anyone ever bothered to ask them), the most heartfelt best wishes to everyone who has so kindly written to me or taken the trouble to encourage others to view my humble efforts, in particular: La source aux bois, Stochastic Bookmark, Michael Sporn Animation, Scott Sharplin's Infinite Number of Monkeys and especially the truly erudite Snarkologist, Doug Howick. All of the above are the most sporting-type fellow snarquistes you could wish for.

As a small holiday token of my gratitude (and another manifestation of my relentlessly misplaced and futile commercial instincts), I offer my readers the screensaver seen above (1280x1024). It is eminently suitable for the desktops of all cubicle-trapped office drones who entertain idle fantasies of a tropical cruise in this, my private world … the best of all possible worlds …

Enough of talk, so, if you don't object, my dear, we'll try a glass of bitter beer. I think it looks inviting.
Posted by Mahendra Singh at 4:09 PM 4 comments:

Email ThisBlogThis!Share to TwitterShare to FacebookShare to Pinterest
Labels: auld lang snark, I saw mommy kissing a bellman-boots-baker-billiards-beaver-banker-barrister-butcher-bonnets, santa got run over by a boojum, screensavers, silent night silent snark 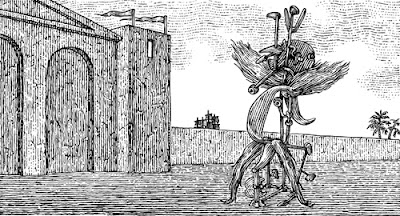 But the principal failing occurred in the sailing,
And the Bellman, perplexed and distressed,
Said he had hoped, at least, when the wind blew due East,
That the ship would not travel due West!

And so, even the least of the Bellman's hopes shall be occidentally disoriented. What wind blew you hither, noble Bellman? Not the ill wind which blows no man to good. Nor that wind which is winding the watch of your wit; so that by and by it will strike.

I think this wind is what the learned scholastic Flann O'Brien would call the ultimate and inexorable and supreme pancake at the back of the whole shooting match, ie., omnium. And what is this omnium of this wind that we hear so much of on the tellyvision? It is the essential, inherent, interior essence which is hidden inside the root of the kernel of everything and it is always the same. The bane of Booja* and Bellmen alike, the curse of the drinking classes, this here omnium-wind is the wind of an indefinite divisibility.

* The nominative plural of boojum is booja, this particular species of the genus Snark being neuter in nature — Snarkus boojum. The verb itself is regular, of course: booja, boojas, boojat, boojamus, boojatis, boojant; although the correct orthography should really be BOOIVM, BOOIA, etc.
Posted by Mahendra Singh at 9:41 AM No comments: 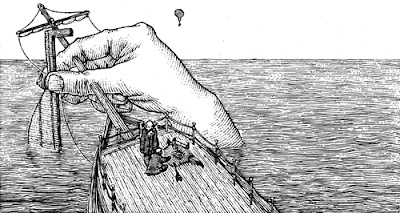 He was thoughtful and grave — but the orders he gave
Were enough to bewilder a crew.
When he cried "Steer to starboard, but keep her head larboard!"
What on earth was the helmsman to do?
Then the bowsprit got mixed with the rudder sometimes:
A thing, as the Bellman remarked,
That frequently happens in tropical climes,
When a vessel is, so to speak, "snarked."


As the nurturing, endlessly comforting snows of Québec begin to numb our cerebelli at chez snarque, we have ample time to reflect upon the old adage: good artists borrow; great artists steal (and never from the merely good artists). I've mercilessly looted the Belgians, French and Italians, so the inspiration for this stanza will have to be purloined from the Germans.

Easier said than done, I soon discovered. Friedrich Nietzsche (The Bonnets) and Martin Heidegger (The Barrister) refused to countenance my scheme but Karl Marx (The Banker), that preternaturally prescient Protosurrealist, quickly came up with some snappy double-talk to justify my larcenous designs. He pointed out that crime is actually good for the likes of Lewis Carroll and his ilk (double-plus-good, in fact):

"The criminal produces not only crime but also the criminal law; he produces the professor who lectures on this law and even the inevitable textbook … the whole apparatus of the police and criminal justice … also art, literature, novels, even tragic dramas … he (the criminal) gives a new impulse to the productive forces."

That's pretty juicy stuff, say no more, Karl! Within minutes, my crack team of ninja-idiot-savant-cat-burglar-draftsmen had illicitly purloined and haphazardly reproduced this picture of a giant thumb lusting after his maternal walnut from none other than Max Ernst, the noted German surrealist and an echt bon vivant with the consummate Carrollian taste to die the day before he was born.

Of course, you, the dear reader, may ask: what's this picture got to do with a vessel being snarked in tropical climes? I can only reply: It's a fair cop, guv'nor!


NB. Max Ernst's illustrations for the Snark are dadamax-loplop-good! One may wonder what Lewis Carroll would have made of them, but by using our Protosurrealist critical apparatus we can safely say: yes.

Apropos of nothing in particular … Eugène Delacroix pooh-poohed maritime disasters and English literature, both of them subjects dear to my heart …

NB. I have increased the mineral content of Delacroix's head to compensate for his natural Gallic bouyancy and to highlight his affinity for impersonating an Easter Island moia.
Posted by Mahendra Singh at 8:18 PM 2 comments: