The most popular posts I've done on this blog were the technical critiques of Moebius' Airtight Garage … I suspect that there are young illustrators reading this blog in the hopes of actually learning something of practical use. So I'll skip the usual Snark and talk shop instead … if the public approves, there's plenty more on tap.

There's a lot of talk in North America about the problems of minorities in the publishing/comix business. I'd like to point out something that seems to get lost in the brouhaha: when you think through the business implications, your problem-of-being-a-minority is a distinct advantage.

Minority/POC illustrators and authors: since you are statistically less likely to have gone to the right school or drank at the right watering hole or even slept with the right people, you have only your work and your work habits to sell you to editors, art directors and publishers. You MUST consistently produce conceptually and technically superior work, on deadline and genuinely camera-ready or copy-editor-friendly, you have no other viable career strategy. Yes, publishers will pay you less but that will improve as you progress, assuming that you never relax your standards.

In fact, when you think it through, discrimination creates a distinct advantage for minorities in the Darwinian cesspool we call the publications business. Plus, it's a genuine hoot knowing that the Last Bastion of the Protestant Work Ethic in North America is the Invisible Man!

And here the lesson endeth.
Posted by Mahendra Singh at 9:12 AM No comments:

The snark from another planet 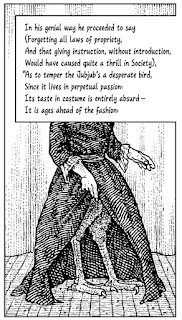 We are very pleased to bring you this startling mental picture of a Jubjub, fleshed out, as it were, from the grease-stained and tattered blueprints provided to us by the engineering firm of Dodgson, Carroll & Associates. This once reputable British firm of snarkwrights, headquartered in Guildford, Surrey, had utterly cornered both the domestic and export trade in British Nonsense by the end of the 19th century.

Their patented Jubjub Bird, shown above, started out as a commoner’s garden-variety hoopoe-cum-popinjay but Carroll, a mad and impulsive boy at heart, kept adding on a bit here and bit there until he had invented what came to be known as "the bird of perpetual passion". Too spicy for staid British tastes, it enjoyed a certain vogue in France until the advent of lurid mass-produced, paperback novels rendered it obsolete.

This particular example is a fine example of the classic Victorian penchant for thick-ankled avians swaddled in the finest watered gutta-percha silk. It was discovered by this artist, roosting in the most meager, luxury suite of the Ritz-Carleton, subsisting on a paltry diet of sugar daddies and hot buttered toffs until it was lovingly restored to its original bird-brained splendor by a poultice of blank checks and a strict regimen of breakfast at Tiffanys.

I think it would look rather fetching hanging on your arm, whenever you appear at the Drones Club or wherever it is that you roost at night.
Posted by Mahendra Singh at 8:17 AM No comments:

Snark is Icumen In 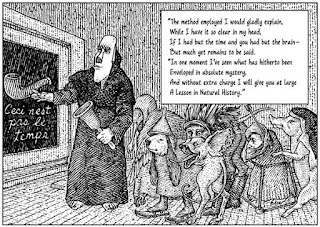 Lewis Carroll is too polite to say so but I’m going to give the kiddies a scare by telling ‘em that Natural History is an unnatural construct. It’s a False Boojum hatched by the machinations of a power-hungry 19th-century bourgeois patriarchy determined to crush the legitimate political and social aspirations of a downtrodden proletariat animal, vegetable and mineral kingdom.

Just look at ‘em, this riffraff of the finest art museums of Europe and the Americas, the lumpenproletariat of Bosch’s crypto-Christo-Malthusian nightmares forced to rub shoulders with the decadent, antisocial pictosemiotic propaganda of René Magritte! Scandalous! And has anyone noticed that both of these so-called artistes hailed from the Low Countries? Coincidence? I think not!

It is indeed low, ‘tis very low indeed when the legitimate hopes and aspirations of an entire roomful of creepy-crawly delirium tremens-type habitues must get a snootful of this kind of pseudoscience at the sweaty hands of a boisterously glandular, Polynesian moai afflicted with a pseudoclerical penchant for faith-based crossdressing.

Boo, hiss, boo! Have you ever heard such a thing? This is not the sort of Hunting of the Snark for which our gallant forefathers shed their precious blood on distant, foreign shores! It’s something else entirely and if I had but the time and you had but the brain, we’d sort it out, you betcha!
Posted by Mahendra Singh at 8:52 AM No comments:

All quiet on the Western snark 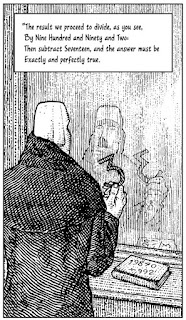 This baffling stanzel of The Hunting of the Snark (known to Continental snarkologists as the Pons Asinorum) presents the Carrollian illustrator with a genuine head-scratcher.

Unlike illustrators who resort to a stylistic and conceptual flight behind the faux-ironic concealment of an adorably semi-infantile aesthetic when confronted by any text more complex than, let us say, the plot précis of a sharp blow to the head, this illustrator (pauses to take a deep breath and a swift gulp of the restorative gin gimlet splashed upon him by the nubile Assamese hootch-kootchie girl languishing pool-side at his beck and call), this illustrator likes to give his public value for their hard-earned money.

And since this entire mighty enterprise which I call The Hunting of the Snark is offered to you, the general public, for only $11.99 USD (cheap), a certain discrepancy in all of the above malarkey may be detected by some of you.

To all of that I must raise high my gin gimlet in a cheerful acknowledgment of the utterly baldfaced cheekiness of the above illustration. It’s all hokum, every last bit of it. Lewis Carroll has clearly described some sort of mathematical thingum-a-jig and all I’ve come up with is a hazy, second-hand memory of an obscure Magritte semiopictulum of Edward James going through a looking glass and finding that the more you turn around to face oneself, the more you must turn one’s back on all that. Or something like that. Mirrors and mathematics alike give me a headache with their slavish devotion to reality and all that sort of thing, each claiming to demonstrate only that which is perfectly and exactly true.

The creepily eagle-eyed reader will notice that a copy of E.A. Poe’s Narrative of Arthur Gordon Pym is lurking in Magritte’s painting, a novel which this author boldly and a bit drunkenly asserts to be the Great American Novel. Take that, you big fat white whale! And if this opinion does not please you, sirrah, my Assamese spitfire is perfectly willing to fight you upon any terms you please!
Posted by Mahendra Singh at 9:09 AM No comments: 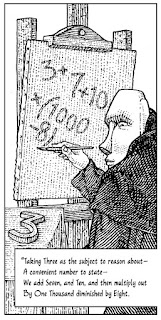 This is not a clue to the fabled and elusive meaning of The Hunting of the Snark, for this is not clairvoyance.
Posted by Mahendra Singh at 9:35 AM 2 comments: