Fit the Fifth, Page 38, Panel 1 … as Gregor Samsa awoke one morning he found himself transformed into a gigantic snark 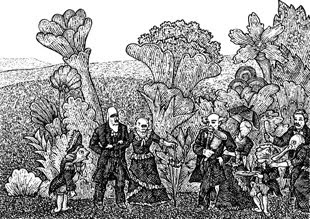 Such friends, as the Beaver and Butcher became,
Have seldom if ever been known;
In winter or summer, ‘twas always the same —
You could never meet either alone.

The attentive reader will notice that in this panel, as in the last two panels, we have been undergoing what specialists in this sort of thing call a Transition. Beginning with an ur-schoolroom redolent of the worst Boschian horrors Christ Church could have on tap, we shifted into a theatrical backdrop of sorts, then flitted through a hasty visual flashback of various preceding Fits and now find ourselves in a pastoral sort of setting, evocative of an English garden party frequented by exactly the sort of Carrollian riffraff one always finds lurking about at such affairs.

Gosh! This Transformation business is mickle hard to pull off, it’s certainly easier for the likes of poets such as Lewis Carroll to shift quarters if they wish, it’s merely a question of them upending a spare thesaurus and rummaging about with a few new adjectives and suitable prepositions. For us picture-wallahs, it’s a whole different story! The extras have to be chosen and then costumed, the appropriate locales have to be researched and then reproduced at considerable expense, then there’s lighting and makeup, why, the catering alone is an logistical boojum!

In this case, we’ve arranged for some currently unemployed peons from Alice in Wonderland to serve drinks and snacks whilst the Fellowship of the Snark mill around in period costumes with various Protosurrealist floozies glued to their arms, all of ‘em muttering rhubarb-rhubarb-custard-custard to give it all that air of Carrollian verisimilitude.

Of course, in the Good Old Days they didn’t call it a Transition, it was a Metamorphosis back then and it was all the rage in pre-Christian circles. You couldn’t go outside for the morning paper without bumping into someone’s teenaged daughter bursting into foliage or regressing into a giant spider; such goings-on were pure catnip for the poets of that time and I think it’s safe to say that the advent of monotheism put the kibosh on a considerable source of innocent merriment for both gods and mortals.

All of which brings us to the semi-belated point that in some subliminal manner, Lewis Carroll’s High Anglican penchant for Nonsense verse is really the sneaky pagan’s taste for Metamorphosis resurgent in the usually sacrosanct domain of Logic and Semiotics! As always, I’ll eschew further elaboration of this particular observation out of respect for the sausage-stuffing-phobia of any decent reader towards such crypto-Bismarckian literary goings-ons.

I shall confine myself to remarking that Metamorphosis is a fine thing, a double-plus-fine thing to liven up any bit of illustration or verse you might have handy; perhaps the Beaver and Butcher’s unexpected metamorphosis into the very best of friends is just the sort of versification needed to bring back the salad days of wine, women and Pagan Nonsense …
Posted by Mahendra Singh at 6:30 AM No comments:

Email ThisBlogThis!Share to TwitterShare to FacebookShare to Pinterest
Labels: Alice in Wonderland, Metamorphosis, Nonsense, The Beaver, the Butcher 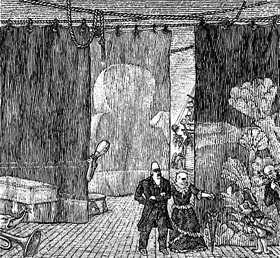 While the Beaver confessed, with affectionate looks
More eloquent even than tears,
It had learned in ten minutes far more than all books
Would have taught it in seventy years.
They returned hand-in-hand, and the Bellman, unmanned
(For a moment) with noble emotion,
Said “This amply repays all the wearisome days
We have spent on the billowy ocean!”

May we conjecture that in this melodramatic passage of verse (redolent of Tennyson’s more sentimental confections) the poet Lewis Carroll is performing some sort of prosodic sleight-of-hand meant to encapsulate into a very nutshell, as it were, the entire gamut of stormy passions and turgid pleasures which we lesser folk call Married Life?

The fool-suckling and small-beer-chronicling of married life was unknown to Carroll personally. However his friend C.L. Dodgson seems to have known something about the Vast Mystery of Connubial and Familial Bliss in a second-hand sort of manner and probably let Carroll in on the joke, so to speak.

The true-life confessions of the Beaver are spicy stuff indeed, by Victorian standards! Her bitter observation that looks are always more eloquent even than tears is a clear reference to the Eternal Dilemma of the weeping, middle-aged woman confronting the illicitly toothsome paramour of her caddishly retro-adolescent-spouse.

The Bellman’s fleeting emasculation is a proto-Freudian dig (or even a snigger, I’m not quite sure) at thing-um-a-jig and perhaps even what-you-may-call-um, pretty strong stuff indeed for a commoner’s garden variety Snark Hunt and better left to the plain-brown-wrapper crowd who frequent the less-reputable purlieus of English verse!

There’s also some versical bits and pieces hinting at the Disconsolation of Books, the Inevitable Patching It Up for the Sake of the Kids and even a bit of emotional doubletalk on the Bellman’s part, solely for the purposes of smoothing things over for his pal the Butcher, who remains conveniently silent throughout this whole cringe-inducing, Mills & Boon production.

All in all, it’s a pretty sordid low point in this Snark and perhaps even in this artist’s ongoing commentary upon the same. Sure, I’ve dressed it all up with a nice picture and some fancy music-hall-type crosstalk of a pseudo-intellectual bent but deep underneath it all, it’s all really quite shallow. Wearisome days, indeed, eh?
Posted by Mahendra Singh at 6:30 AM No comments: 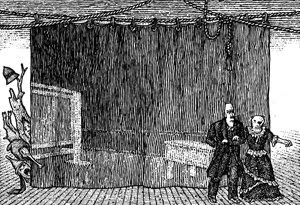 The Butcher would gladly have talked till next day,
But he felt that the lesson must end,
And he wept with delight in attempting to say
He considered the Beaver his friend.

Friendship is, of course, a double-edged sort of business, the very sort of tricksy fritter-my-wig-thingum-a-jig that Messers Lewis Carroll and C.L. Dodgson must have pondered over quite a bit in the course of their own long and fruitful association.

The attentive reader (is there any other?) will remember my own reasons for emasculating the Beaver, and I think that this very stanzel is proof positive of the aesthetic rightness (or is it righteousness?) of that long-ago, fateful decision on my part.

And so, we see here the Beaver and Butcher heaving into view with their freshly-minted friendship in tow. Needless to say, the friendship of the Butcher will prove a heavy burden for the luckless Beaver. The former’s penchant for looking the part of an incredible dunce, as evidenced in his just-concluded, semi-interminable monologue upon all things Jubjub, will weigh heavily upon the Beaver’s sensitive soul.

May we conjecture that Carroll might have had the same private misgivings concerning his rather leechlike pal, Dodgson? The basic principles of Prosodic Forensics may apply here, my dear Watson, when one bears in mind that once one has removed the impossible from whatever verse one is studying, whatever one is left with, however improbably, is the logical solution.

The Butcher’s poetic modus operandi is painfully obvious: dunderheaded obliviousness to all things outside his realm of expertise, a compulsion to lecture strangers ad infinitum, etc. Such a description is, as some of us are painfully aware, the very epitome of the college lecturer, of which C.L. Dodgson was a prime example.

The Beaver’s versical activities in the last Five Fits have been limited solely to making lace and saving the entire crew from wreck. The former activity is utterly frivolous, as is versifying in general, and the latter activity is nothing less than an oblique reference to her skill in composing galdors, those Celtic verse charms used in pagan times to protect the common folk from evil through the application of some mysterious, verbal magic unknown to the layman!

The attentive reader should promptly compare the above description to Lewis Carroll, and finding that it’s a perfect match, brandish their regulation Scotland Yard handcuffs, then secure the guilty party and march him off to the station to take his statement, the villain!

And while you’re at it, Sergeant, cuff that Dodgson wallah, he was probably in on it with Carroll, the two of ‘em are inseparable friends, don’t you know. We’ll soon have at least one of ‘em singing like a canary, probably till the next day, I’m afraid.
Posted by Mahendra Singh at 6:30 AM 4 comments: