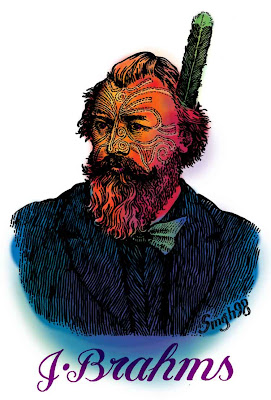 The press of deadlines has addled my inky brain box plus I'm just darn tired … so, no Snark explications this week, but instead this drawing from the files, a portrait of Johannes Brahms, the Noble Savage of Wilhelmine Germany.

NB. If you want to waste even more of your employer's time, the poetry-loving folks at TheThePoetry.com have posted some of my de La Fontaine translations with artwork here. I'll be appearing at a panel discussion in NYC that's being organized by Bianca Stone, one of the poets behind TheThe and we'll be discussing poetry & comix. More info to come.
Posted by Mahendra Singh at 6:00 AM No comments: 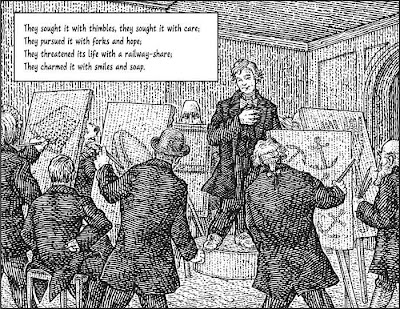 My Newt Gingrich illo (see last posting below) possessed so much mojo that this Snark illo of mine is probably going to break the internets. Sure, to some people it's just a picture of the Fellowship of the Snark girding their loins for the heavy-going of Fit the Eighth but to some other people it's voodoo of the highest order.

These other people know that the verse quoted here is actually an Anglo-Saxon galdor, cunningly disguised as the refrain of the Victorian era's only genuine, certifiable verse epic, The Hunting of the Snark. Its author, the Rev. Charles Lutwidge Dodgson, devised this Fit as a cunning disguise for a particularly violent dénouement of his literary protagonist, the Baker, who was himself a cunning disguise for Lewis Carroll, the well-known cunning disguise of the good Reverend.

None of this matters much to modern readers (particularly American ones), some of whom seem to have difficulty remembering that only a few years ago, Newt Gingrich announced that “the idea that a congressman would be tainted by accepting money from private industry or private sources is essentially a socialist argument.”

Substitute the word "congressman" with the word "illustrator" and the above drawing quickly becomes an inevitable reality, spawned by the unholy conjunction of this illustrator's Snark and a small bit of private industry known as Melville House. Doubtful readers can test the veracity of this statement by purchasing a copy of our Snark GN and seeing how tainted this illustrator feels afterwards … none at all, I can assure you.

Thimble, care, fork, hope … the fetish objects of a political cargo cult which roams the post-postmodern halls of power, charming the pants off the American electorate with mere smiles and soap.

NB. This elective affinity for Newt springs from the basest of motives, I can assure you … a long-ago, half-remembered encounter at the AEI during yet another one of those fruitless, inane job interviews which blighted this artist's salad days … which brings us (finally) to this:

"What we need today more than anything else is to invest in beauty, because beauty is harmony … But we invest in chaos, because chaos is much more profitable than peace ...." — Vangelis
Posted by Mahendra Singh at 6:00 AM No comments: 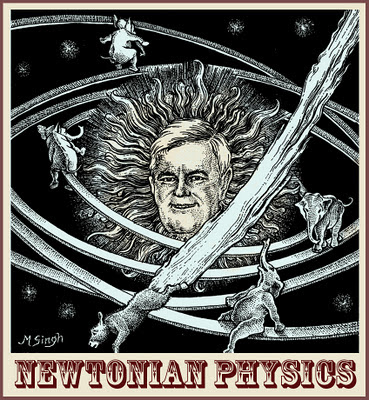 If you're a political junky and a devotee of Unadulterated Nonsense, the Republican primaries in the USA are pure catnip.

Newt Gingrich seems poised (once again, yawn) on achieving total world domination of some sort and I cannot resist posting this illo that I did many years ago, in his salad days as Speaker of the House in the 90s.

In the best nation on earth things can only get better!
Posted by Mahendra Singh at 7:16 PM 2 comments: 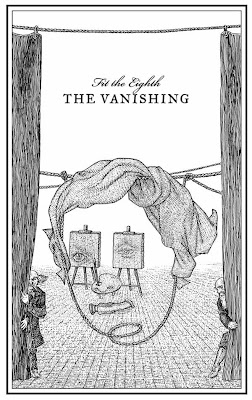 Parental Warning: This week's Snark posting contains scenes of paranoiac-critical crosshatching and surrealist innuendo that may not be suitable for younger readers.

Devoted readers will know that I've made the frontispiece of each Fit of this Snark into a visual pun of some feeble sort. They will also know that the Snark itself is concealed in each frontispiece, vamping it up in the cunning disguise of an Unsleeping Eye, ie., what is the Snark? — it is Eye!

Undevoted or even flagrantly promiscuous readers will wonder what all the fuss is about. Are they being thickies or is there no discernable pun in this, the very last frontispiece of the very last Fit (or Fitt in the traditional Anglo-Saxon) of our GN?

Well, it all depends upon your definition of what a pun is, or even, as a certain American libertine once noted, upon your definition of what "is" is. For what we have here is not a literal Vanishing but a visual Vanishing, a Vanishing away of the poet Lewis Carroll (upon whom the soon-to-be-Vanished Baker is modeled), out of the 19th-century British Raj and into the natty decor of a 1930s Upper West Side apartment furnished by none other than Salvador "Avida Dollars" Dali. 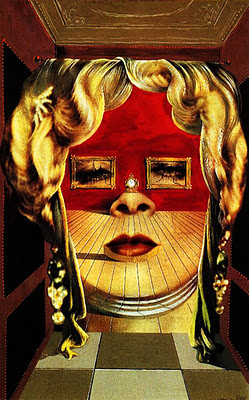 We've already had a go at Dali and his paranoiac-critical method, an addictive type of eye-candy which can lead to dilated pupils, loss of motor coordination and workplace giggles (better known as Gateway Surrealism Syndrome), but I think we've successfully plumbed new depths here by insinuating the Admirable Carroll into the private residence of the legendary Mae West, a woman of genuine capabilities. Hubba hubba, as they say here in Montreal (although it's a silent "h", bien sûr). 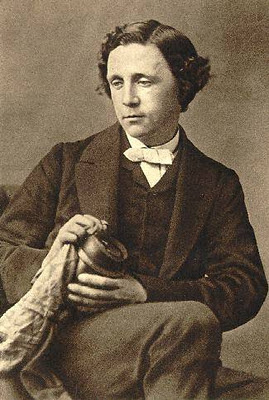 Lewis Carroll AKA Charles Lutwidge Dodgson AKA The Baker

More sober-minded readers will ponder the fact that the portrait of Carroll used as reference by this artist was made by Oscar Rejlander, a talented photographer whose work will be cropping up again on page 81, thanks mainly to his public domain status, the poor dope.

My drunken, slobbering, tie-askew, pants-disheveled readers can skip all that and go ahead and google ( a portmanteau of "go ogle") Mae West, a woman who carnalized the Bellman's Clochetic Rule of Three into a handy dictum which fits discreetly into any young lady's purse, viz. “I'll try anything once, twice if I like it, three times to make sure.”

NB. The Boot's well-turned ankling is no accident, it is — the shape of things to come!
Posted by Mahendra Singh at 6:00 AM No comments: 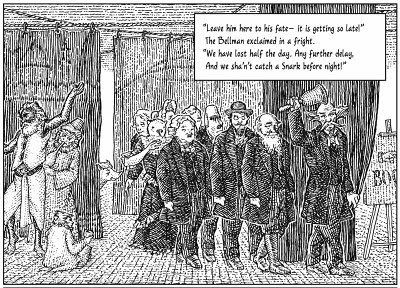 Leaving someone to their fate is all the rage in certain philosophical circles. The smart set calls it a feeble-minded tautology but we think it's a splendid excuse for yet another obsessively cross-hatched depiction of Karl Marx shaking his fat German booty in a tight-fitting Hindustani harem outfit.

Of course, if you just tuned in to this GN version of The Hunting of the Snark, you're probably eying the exit by now, eager to get away from all this eschatological psychobabble but if you're a regular habitue of these parts, you'll know that all of the above is just another example of this artist's singular inability to clearly explain whatever it is that he's up to.

The shehnai-playing monkey and the bewigged barrister-pig are window-dressing for the real "meat" of this stanzel is the squiggly, blobby bits of ink encrusted on the right-hand margin, the ones that spell out the word "BOO". This word's grim import will become clearer later on but for now, I suggest that you avoid making eye contact with it.

Snark drawings are the New York subway-riding winos and psychos of the illustration and comix world; reeking of strong ink and sour, week-old tautologies fished out of filth-ridden dumpsters, they spell nothing but trouble, especially of the B-O-O ilk.

So go ahead, give 'em your spare change if you want to but you know what they'll do with it, don't you? … far better to leave them to their fate while you scurry back to your cozy, safe home in the predestinarian suburbs …

Meanwhile, a propos of nothing in particular … here's Terry Gilliam's take on making a living in the arts:

"If I'd actually learned any of the lessons, I wouldn't be making films anymore. I try not to learn. I spend most of my life unlearning …" 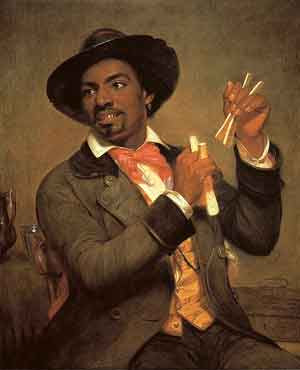