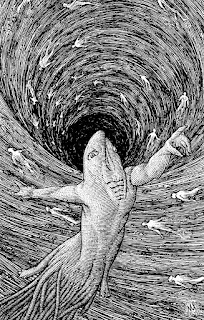 Readers expecting graphic Snark on this holiday posting will be disappointed; I have to confess that I'm too pooped to come up with the requisite Snarkian goods.

Instead, I'll regale you with some behind-the-illustrative-scenes gossip which you can mull over while enjoying your Christmas Gluhwein and curry … because here at chez Snark we're busy turning out not one but two books at once, as befits our bipolarsexual book mania:

The highly esteemed & talented SF writer, Adam Roberts, have very kindly allowed me to illustrate his latest novel, 20 Trillion Leagues Under the Sea. I adore the works of Jules Verne and frankly, most contemporary variations & updates of his oeuvre leave me unimpressed if not revulsed. But Adam has delivered the goods with this one, it's a corker on every level and I think that even Jules would approve.

Adam's novels are as tightly written, mind-blowing and well-plotted as anything from the earlier British New Wave — perhaps more so, to be honest — and for this illustrator, those far-off days remain a fond memory of SF's (second) salad days. North American SF is now healthier than the 1970s but to be honest, the vast bulk of it is still as thoughtless and timid as ever. But 20 Trillion Leagues demonstrates that SF can be both a Ripping Yarn and a conceptual tour-de-force complex enough to satisfy even the pickiest thesis-hunting post-grad.

In any case, it's a highly humid book and I'm fast becoming an expert on drawing terrified sailors in a doomed submarine. Plus, the villain is super cool and there's some sly Snark references! In fact, there's something vaguely Lovecraftian about this work, better than Lovecraft actually … god, there's a boring author who deserves to return to pulp Limbo. I'll take Robertsian horror any day, it's more … crafty … 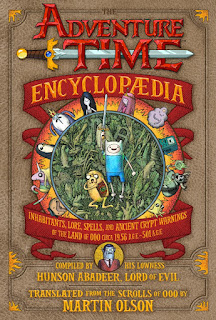 I'm also contributing to the new Adventure Time Encyclopaedia by Martin Olson. Readers may remember Martin as the sick, twisted genius behind The Encyclopaedia of Hell and he's recruited most of the same talented team of fellow twisted, easily gulled sickos to do this new book for Abrams. It's been almost 30 years since I did some kid's stuff (Don Diego and his Time-Travelling Llama, remember that?) and Adventure Time seems to be a bit more popular with the kids. My agent assures me that fame and fortune are soon to follow, or at least a clever simulacrum of them.

I can't divulge any details of the book but I can assure younger readers that neither Finn nor Jake are sucked into a watery abyss bent upon the annihilation and subjugation (or is it the other way 'round?) of the human race, just for cheap humid thrills. That's Adam Robert's speciality.

Instead, they are crosshatched within an inch of their lives by a ink and tea-swilling Indo-Germanic proto-surrealist hack, plus Tony Millionaire,