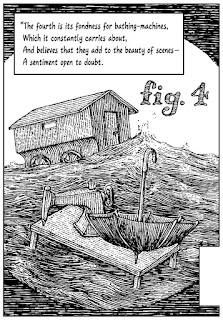 Given : Only with one’s bathing-machine can one bathe properly and thoroughly.Given : The divinely-ordained, absolute and ineffable perfection of any place cannot be achieved without a bathing-machine.Ergo : Cleanliness is next to godliness.Not a surprising sentiment coming from the pen of an English clergyman’s son but it is an accurate depiction of the Snark’s true character and motives? Read on, MacDuff …Given : The Snark’s sentimental attachment to bathing-machines does nothing to improve the beauty of scenes.Given : The Snark’s sentiments are open to doubt.Ergo : When in doubt, do nothing. A Fabian approach to the hunting of Snarks but will the poilu tolerate it? History warns us otherwise! Je me souviens Cannae …Given : The utility of a bathing-machine lies solely in its property of not allowing an observer to know what is inside it.Given : The Snark’s chief happiness is the transportation of its bathing-machine from one place to another.Ergo : Ignorance is bliss.And there you have it, another Clochetic validation of the platitudinous proverbs with which we usually stave off our lexical and cognitive horror vacui. I have illustrated all of the above palaver with another infamous platitude, one of the Comte de Lautrémont’s most infamous bromides: the chance meeting on a dissecting-table of a sewing machine and an umbrella. I think the bathing machine lends a certain banality to the whole thing, don’t you? Even surrealism (and especially protosurrealism) has its sentimental, even hackneyed picture-postcard moments!
Posted by Mahendra Singh at 9:39 AM No comments: 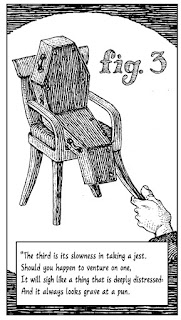 The story so far … the Snark stands accused of Bad Taste, Poor Timing and now — Humorlessness! The Bellman’s Indictment of the Snark seems to have shifted to the tactics of an inebriated heckler pestering a talentless Las Vegas stand-up comedian, not a pleasant scene at all for our Snark!The Bellman’s caught our Snark doing his surrealist schtick in one of those postmodern, off-Strip venues and frankly, it hurts to watch him trying his luck with outdated material cribbed from old René Magritte routines … trying to to make the audience laugh by pulling their legs with his grave puns … untranslatable from English to boot.

His Belgian style of humor is so phlegmatic, one might even say flemish owing to his persistent coffin … but our Snark cracks wise one last time, that old protosurrealist chestnut about Madame Récamier owing Manet some Monet and when he comes to collect, she’s such a dead-beat that she stiffs him.
Looking grave, eh? Feeling distressed? The Snark … it is you …
Posted by Mahendra Singh at 9:21 AM No comments: 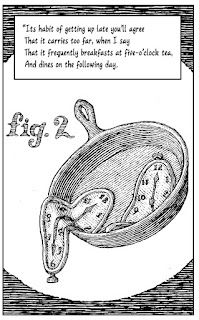 The Bellman continues his Exposition of the Snark with a second accusation — Sloth!* We illustrate his text with this shameless, paranoiac-critical crib of Salvador "Avida Dollars" Dali. Dali’s paranoiac-critical method of picture-making (essentially a groovy sort of free-association delirium) is itself a shameless crib upon 20 centuries of artists lying on the sofa with their feet up and eyes shut in search of inspiration.But beware the light of the Bellman’s magic lantern! Beware the paranoiac-critical method — it’s bad juju! Once you start using it, you can’t stop — gateway surrealism I call it! Image generating out of image, a maelstrom of vivid mental pictures at the speed of thought itself, free-association run amuck while perceptual reality as we know it disintegrates in a chain reaction of infinite visual meanings — until you’re trapped in a world in which one breakfasts at five-o’clock tea and literally thinks nothing of it!We find our hapless Snark lost in this paranoiac-critical Ice Age (perhaps the evolutionary niche of the dreaded Boojum itself!), trapped in a world not of his own making! Within this glacial Lost World of the paranoiac-critical zone, it is only the persistence of memory which allows the Snark to find nourishment. Its primitive intellect swamped with the visual overload of everything-being-at-once, it will starve to death if it cannot remember to eat its supper, even if a day too late. It even carries on its person a railway watch (shown above) with which it plans its desperate, solitary meals.And so … our Bellman confounds for Sloth what we now know to be Hunger! Come on, guv'nor, spare a kind thought for a ‘ungry Snark, eh? He’s not such a bad fellow after all … (cue orchestra) … for when a Snark’s not engaged in his employment or maturing his felonious little plans, his capacity for innocent enjoyment is just as great as any honest man’s. Take one consideration with another, the Snark’s lot is not a happy one!_________________________________________________*It should be noted that the Bellman’s sermon upon this sin of Sloth is amplified with instances of Gluttony which are thematically derived from the Snark’s prior sin of Bad Taste. Whether the Bellman’s general exposition is a catalog of Sins (Snarkian lapses from its ideal state of nonexistential perfection) or of Elements (qualifications of the Snark’s non-qualifiable nonexistence) is for the more subtle reader to decide. The distinction is scholastic, and thus, genuinely protosurrealist. The final word on the sinful ontology of the Seven Deadly Elements might be Max Ernst’s masterpiece, A Week of Kindness. Like The Hunting of the Snark, Max Ernst’s personal composition upon this earth was finished before his decomposition, his birthday being April 2nd and his deathday being April 1st. We tug on our ink-soaked forelocks in salute to Max Ernst, the Police Gazeteer of Surrealism!
Posted by Mahendra Singh at 10:54 AM No comments: