"Let us take them in order. The first is the taste,
Which is meager and hollow, but crisp:
Like a coat that is rather too tight in the waist,
With a flavour of Will-o-the-wisp.

The question of the Snark’s flavor has exercised the minds and palates of the cognoscenti since April 29th, 1876. However, I am possessed of an indolent nature and prone to fits of take-out, such questions matter not a whit to me. The uncooked flesh of the Snark was sufficient for our more distant ancestors but today’s effete gastronomes* must have their Snark curried, tandoori grilled or even minced into seekh kebabs — but never boiled à la anglaise (the hollowness vanishes leaving behind a residue redolent of a fleet of bathing machines saturated in warm, flat beer). In the spirit of this week’s 132nd anniversary of the publication of the Hunting of the Snark, a recipe for cooking Snark follows. Please try it, you won’t be disappointed!

Genuine Assamese Snark Curry
Mix the following together:
• 1 kilo of Snark meat, cubed (if no Snark is to be had, use beef, goat or lamb, preferably with bones)
• 6 medium onions, minced
• small head of garlic, minced
• an inch of fresh ginger, grated
• tablespoon of turmeric
• one cinnamon stick
• one cup of oil
• tablespoon of salt
• a sufficient amount of genuinely hot green chilis, slit
• if you wish to "Indianize" this curry, also add a tablespoon of ground cumin, a tablespoon of ground coriander and a tablespoon of garam masala. This might be preferable for those who are accustomed to the somewhat ubiquitious flavors of Northern Indian cuisine and enjoy a certain familiarity in their curry. However, the authentic Assamese version has a delicious simplicity which is worth trying!

Mix and let sit overnight. Cook on low heat, with the lid on and stirring occasionally for 30 minutes. Add one cup of water, bring to boil, and then reduce heat to a simmer. The curry should finish up with a thick gravy, not at all runny. Cook for about 90 minutes or until meat is tender. Taste for salt, etc. The curry can be garnished with ghee and/or tamarind water. If beef, lamb or goat meat was used, serve with rice, vegetables and dahl.

However, if you used Snark, serve with greens, using forks and hope. Wash it all down with copious amounts of Golden Eagle beer and the stimulating gyrations of two dissipated nautch girls named Anna and Paisa. What ho, memsahibs!
_____________________________

* For an excellent discussion of effete gourmands and effete European Surrealists and the virile Protosurrealists who made it all possible, I must refer you to this week’s excellent posting on Stochastic Bookmark. Read carefully whilst chewing your Snark 42 times …

NB. Special thanks to Farah for the genuine Assamese recipe and much, much more …
Posted by Mahendra Singh at 8:07 PM 4 comments:

Fit Two, Page 15, Panel 1 … let him that hath understanding count the number of the Snark

"We have sailed many weeks, we have sailed many days,
(Seven days to the week I allow),
But a Snark, on the which we might lovingly gaze,
We have never beheld till now!
"Come, listen, my men, while I tell you again
The five unmistakable marks
By which you may know, wheresoever you go,
The warranted genuine Snarks.

We have arrived now at the very omnium of Fit the Second, that critical portion of The Hunting of the Snark in which the author describes in detail the characteristics of the genus Snark. To explicate these crypto-stigmata, the Bellman has resorted to the very respectable Victorian expedient of the illustrated public lecture. His authoritarian nature naturally gravitates towards such methods of imparting knowledge to the working classes; he also favors the use of a magic lantern to illuminate the more difficult concepts of his lecture with the appropriate visual figures. These will become apparent in the following panels.

But we must turn now to a bit of textual analysis which will pique the interest of all Snarkologists. The Bellman’s preamble (which actually commenced in last week’s panel) mentions in passing three numbers. The numbers 7 and 5 appear on lines 54 and 58, which, in addition to his earlier mention of the number 4 on line 50 in the previous stanza, allows us (nay, compels us!) to perform the following simple Clochetic equation :

We now employ the number 42 (whose Snarkian significance needs no further explication to the illuminati who frequent these parts):

As predicted by the Clochetic Rule of Three, the entirety of the Bellman’s introductory remarks concerning the qualities of the Snark has also served as a cryptic verification of the truth value of 42 by multiplying that auspicious number precisely three times — in an infinite and irrational repetition, to boot! QED and bob’s your uncle.

In closing these remarks, I would like to thank Doug Howick and nnyhav, whose neologisms for a group of Snarks were, respectively : indefectability and exultation. I find both suggestions maddeningly perfect and thus, truly Snarkian.
Posted by Mahendra Singh at 8:55 AM 1 comment:

Fit Two, Page 14, Panel 3 … under the spreading Boojum tree I sold you & you sold me 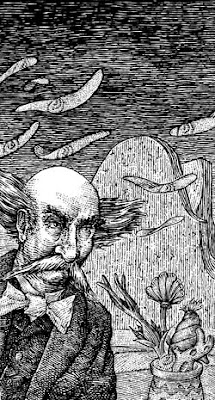 There are those who might quibble and look askance at my rather ideologically vacant interpretation of this stanza. Yes, it is a trifle irrelevant … perhaps even mendacious to illustrate a purported lack of Snarks with a veritable snathe of Snarks.* The concerned reader might well ask : by whose leave do you have artistic license to mangle the words of Lewis Carroll so? Have you no decency, sir? At long last, have you left no sense of decency?

The eminent Oxford don and man-about-town, Charles Dodgson, was probably the only person who could genuinely claim to be intimate with Lewis Carroll. Mr. Dodgson had this to say about the so-called sanctity of Carrollian texts, their meaning and interpretation:

... I maintain that any writer of a book is fully authorised in attaching any meaning he likes to any word or phrase he intends to use. If I find an author saying, at the beginning of his book, "Let it be understood that by the word black I shall always mean white, and that by the word white I shall always mean black," I meekly accept his ruling, however injudicious I may think it.**

Well, that’s pretty much QED, I should think. Simply substitute the word "illustrator" for "writer"; it’s a mere sneesh of semantic and orthographic difference and expressly allowed for by the above-mentioned axiom. In fact, upon further reflection, we can see that the vast bulk of modern art, philosophy, politics and commerce is based upon Dodgson’s diabolically simple postulate.

So stop fussing over these drawings and rest a spell under the ole Boojum tree with me. Goshdarned wordpeople, always making trouble for poor picturefolk …


*The word snathe is used here in a probationary sense. Lewis Carroll never revealed the correct nomenclature for a group of Snarks (ie., a kettle of fish, bunch of whales, etc.) and I have used this word solely as a place-holder of sorts until they (you know who I mean) come up with a better one. I had also considered — and rejected — snatch, sneck, sneap and of course, S.N.A.R.K. (Simultaneous Non-entities Apparitioning Rather Keenly). For those who persnick at such things, all of the above are legitimate entries in The Chambers Dictionary, 9th Ed. Malcontented readers are heartily encouraged to send in their own suggestions. 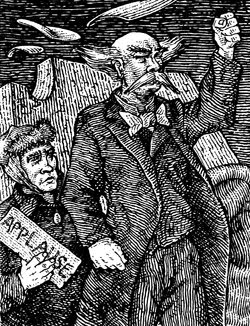 He served out some grog with a liberal hand,
And bade them sit down on the beach:
And they could not but own that their Captain looked grand,
As he stood and delivered his speech.
"Friends, Romans, and countrymen, lend me your ears!"
(They were all of them fond of quotations:
So they drank to his health, and they gave him three cheers,
While he served out additional rations).

The ear motif receives its third and final reiteration (thus fulfilling the Clochetic Rule of Three) in the somewhat maimed person of Vincent van Gogh, who stands behind Comrade Bellman (somewhat in the manner of the Laputian flappers, methinks) to encourage the enthusiasm of all concerned with his sinister aura … of menacing risibility.

NB. Heartfelt thanks to the LCSNA for their very kind mention of this never-ending Snark Hunt of mine in the latest issue of the Knight Letter. With forks and hope we ink onwards and upwards!
Posted by Mahendra Singh at 6:59 PM 3 comments: