Snark in the Time of Cholera

Yes, yes, yes, that’s all very well, dear reader … aren’t you clever to have remembered that Lewis Carroll’s colleague, Charles Lutwidge Dodgson, was named after his dear uncle, Robert Wilfred Skeffington (gesundheit) Lutwidge.I also know that you have made arrangements to force your attentions upon some local chorus girls and impress upon them the coincidence of the Snark’s origins; how Lewis Carroll commenced that poem’s composition in the town of Guildford on July 18, 1874 — the precise time and place where Dodgson himself was playing the role of "dear uncle" whilst nursing a terminally ill, tubercular nephew.But there’s more. While going through an old dustbin the lid flew off and you emerged clutching the proof positive of an avuncular trifecta : a dog-eared account of dear uncle Robert Wilfred Skeffington Lutwidge being murdered by a lunatic armed with a large, rusty nail, the point of which had been recently sharpened in anticipation of its lethal purpose.Enough of these dear uncles and these dear readers! It's this defective pen of mine, it will not draw uncles properly — curse these cut-rate penmongers! This hand-me-down drawing of a telegram of a newspaper clipping of a photograph of a simulated second-hand uncle will have to do for now … at least until that time when all our "dear uncles", like laughter, are doomed to disappear.
Posted by Mahendra Singh at 6:00 AM 2 comments:

Beneath the Planet of the Snarks 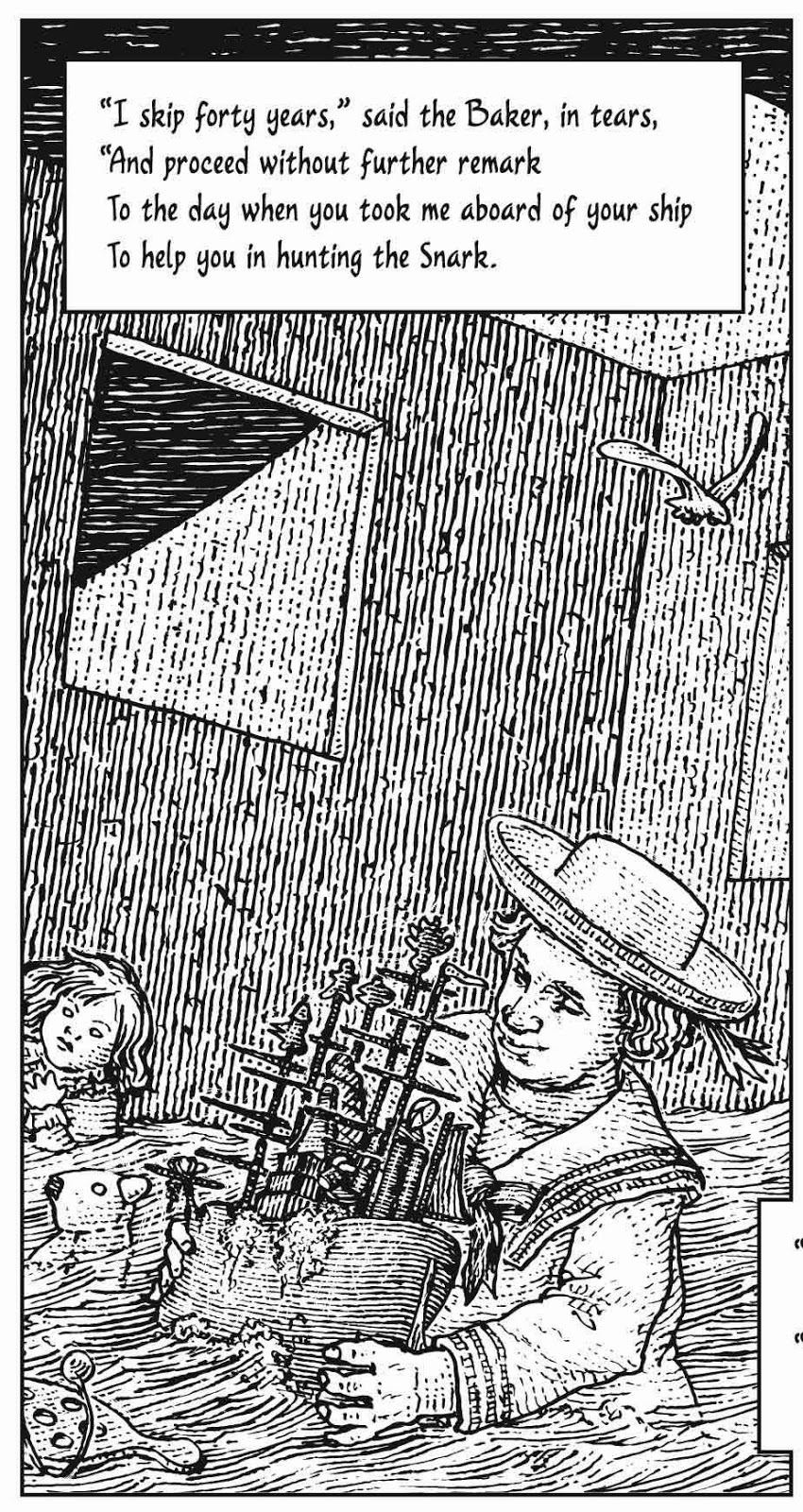 The story so far … there once was a Snark … but it will be a Boojum, alas!The Baker is suffering from what we now know to be angst. Once upon a time we would have pinned the label of big, fat crybaby upon him but these are dangerously litigious times for thought-criminals. Boojum-angst was first used as a legal defense by the Baker’s legal counsel, the Barrister, AKA Martin Heidegger, in his seminal brief (naughty boy!) : Sein und Zeit. He excused the Baker’s regression into a second childhood with the then-novel defense of angst, which he explained as an objectless and generalized dread occasioned by the growing presence of Nothing. The boojum, a nonexistent being, fit this description nicely and the Barrister won an acquital for his client on the grounds that he was an idiot anyway. We shall see more of the Barrister’s weasel-skills in Fit the Sixth.From whence comes this fashion to label all things boojum in the German language? Angst, schadenfreude, strafe (straffen), weltschmertz — all of ‘em teutonic and hardly a laugh in the lot. May we quote the poet Heinrich Heine (finally getting some good reviews in the doggedly illiterate American press) on this subject :"… the Germans have the curious custom of always attaching a thought to whatever they do.”Schnitzel for thought, indeed! All it needs is this mustard-like condiment, from the cupboard of the truly inspired and genuinely missed American illustrator, Edward Gorey :"I have a dumb theory that a creative piece of art is only interesting if it purports to be about something and is really about something else."Milord, the defense rests in its usual, pretzel-like position. Like the Baker — at play in the ontic fields of the lord — to all the above charges of unlawful boojumizing and multiple neologizing we shall plead : ignorance, madam, pure ignorance. Or in the very best Clochetic-cum-Orwellian manner : ignorance, madam, double-plus pure ignorance.
Posted by Mahendra Singh at 9:55 AM No comments:

To snark or not to snark, that is the question 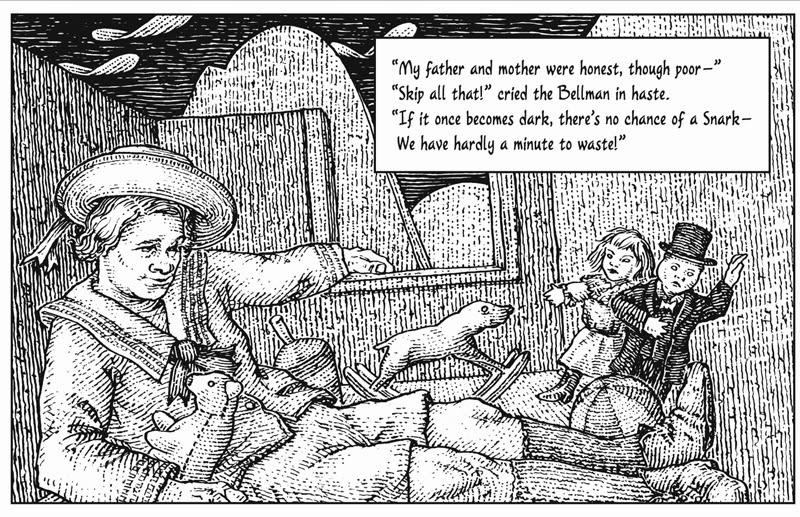 Achtung literati! Avoid any authors unwilling to suffer their own characters’ fate. Eschew the likes of Samuel Beckett and whomever was behind the Book of Job, spurn the fictions of Dante and the Marquis de Sade, turn instead to more egalitarian raconteurs such as Lewis Carroll. Carroll’s sudden referral to childhood in this stanza provides some therapeutic respite to the Baker’s boojum-anxiety complex.
The Baker has responded positively to this authorial auto-suggestion and has infantilized both himself and his parents into an easily digestible and perfectly oedipal size, as we can see in this fine drawing. I will not tell you which of the several nursery room objects are the Baker’s parents, I’ll leave that to you to work out! Just place one after another into your mouth whilst cooing and gurgling.
The more indolent reader might be wondering how this authorial auto-suggestion works. In short, the Baker "hears" his author’s narration and description, etc., as a voice inside his head. Naturally, he has told no one else of this phenomenon. Please note that I have chosen to provide the Baker with the physiognomy of Lewis Carroll himself and thus created an epistomological escape hatch (or trap door) of sorts for the Baker, bless his farinaceous heart.
With all this in mind, the Baker is enjoying a rich and satisfying internal life these days. He goes through the motions of a Snark hunt with his fellows whilst simultaneously believing himself to be a 42-year old Oxford mathematics don plotting the destiny of a hermetic and even pseudo-gnostic Snarkian Multiverse (similar in nature though larger in scope to Le Garage Hermétique de Jerry Cornelius) which revolves and devolves and evolves solely and utterly upon a nonexistent entity which only he can comprehend — and which only he, the Baker, will apprehend!
The infinite melancholy of a long-ago summer’s day in Guildford, compressed into the infantile desire to put the entire world inside one's mouth (it's the Hindu thing to do) … this Snark could be bounded in a nutshell and still count himself king of infinite space! It’s all child’s play for the talented Mr. Carroll.
Posted by Mahendra Singh at 7:46 AM 1 comment:

When Adam snarked and Eve span, who was then the gentleman? 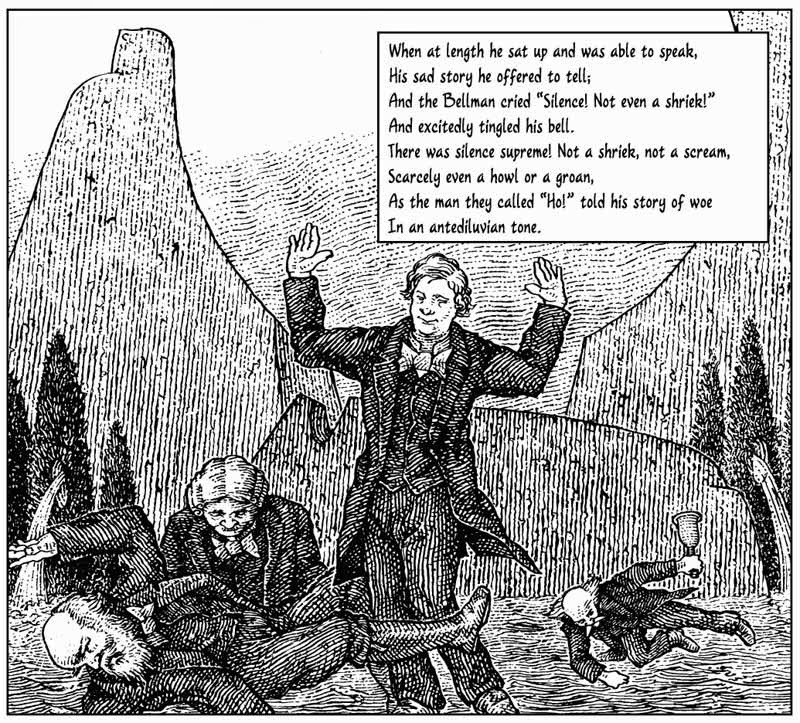 Martin Gardner, in his indispensible Annotated Snark, cites Eric Partridge’s assertion that the Baker’s use of antediluvian is "one of those rare instances in which Carroll uses a standard word in a completely whimsical sense". Gardner also notes the opposing theory of antediluvian being used as a foreshadowing of the Baker’s tears-to-come.

However, you and I know that he’s speaking Adamic, the universal language spoken before the Flood and the dispersal of tongues at the Tower of Babel. This antediluvian language, designed to facilitate Edenic communication between discreet data points in a secure and lossless environment (think FORTRAN or KVIKKALKUL), remains the Baker’s preferred flavour of postlapsarian blarney*. If we waxed poetic, we might even say it’s the angelic language in which animals dream and children babble when the adults are gone to bed.

But we’ll wax not, as yet, for deep, deep, deep underneath the surface, the Baker’s very shallow. Bless his simple Adamic soul but he’s just a Chomskian idiot-savant suffering from untreated postdiluvian stress syndrome. He sees the sun going down and the world spinning round and he macadamizes a postmodern, postlapsarian, postdiluvian and postbabelian man of sorrows on the comeback trail.

As for the Baker’s curious epithet of Ho; it is a typical bit of Snarkolinguistic bandinage, an orientalist snarkwallah’s reference to the eponymous language spoken in eastern India and Bangladesh, a language whose word for man is ho.

* The reconstruction of the Adamic language is a wholesome pastime for the protosurrealist insomniac. Its a priori ontological perfection requires an infinite vocabulary in which every word is a homophone of the other. All conjugations in the infinitive, all declensions nominative, no prepositions needed since every speaker is every thing and thus consubstantial, no interrogatives since they imply a lack of faith, etc. Might we not conjecture that Adamic survives today as the uneasy silence between phonemes?
Posted by Mahendra Singh at 9:33 AM No comments: