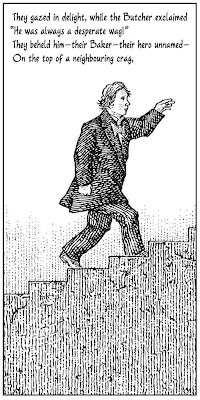 Form and function, the desperate wags of the Carrollian Multiverse!
Posted by Mahendra Singh at 6:00 AM No comments:

There's a snark in my Lion! 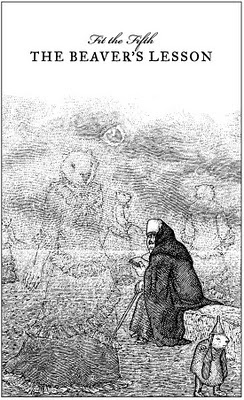 I was planning a double-header for this week, a nice bit of fresh Snark commentary and also an update on the NYU Poetry/Comix discussion that I participated in last Friday … the latter event was a lot of fun and the other poets were very interesting & talented & energetic young people, I have much to say upon the entire topic … except for the fact that I've returned home to discover that my 2-month old Macbook Pro now likes to take 24 hours to boot up … it's running now but I'm waiting for an external HD to arrive so I can wipe and re-install and/or take it to Apple … if any mac techies are reading this and have some opinions on why Lion is so funky (it's been buggy for a while with slow boots & lots of privilege/permissions problems), feel free to email me …

Meanwhile, here's a re-run from the Snark files …

The frontispiece to Fit the Fifth, Commentary Number One:

1. It's not a hunting of a snark, where the snark is the object of the chase … no, it's a hunting undertaken by the snark. This simple grammatical confusion is an object lesson in prosodic clarity for those who care about such things.

The Butcher and the Beaver are beyond that sort of thing by now. They're into a sort of kinky ecclesiastical cosplay based upon the works of Hieronymous Bosch and James Tissot. Best not get too close to either of them or you might lessen …


The frontispiece to Fit the Fifth, Commentary Number Two:

2. After all that hellish ruckus in the infernal Malbowge of Fit the Fourth (sorcerers, falsifiers, circus folk and magazine publishers), we shall now ascend ad astra, as it were, to the quieter purlieus of Fit the Fifth. This canto, the longest Fit of Lewis Carroll’s Hunting of the Snark, is known amongst illustrators as the Purgatorial Fit, for its immense length requires the consumption of vast quantities of cheap whiskey and hot curries to keep up one’s strength.

The cheek! The nerve! I cannot countenance her any longer, yes, away with this Beaver’s Lesson, yes, get thee back to a punnery!

Posted by Mahendra Singh at 6:00 AM 9 comments: 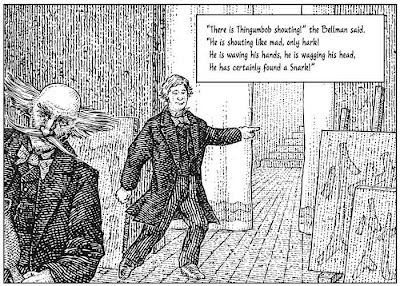 The Bellman is referring to his acolyte, the Baker, who is played here by Lewis Carroll, who is himself being played by the Reverend Charles Lutwidge Dodgson. Both of these players were the guiding genii and prime movers of what scholars now call the Carrollian Multiverse, a multi-bibliarium transcending time and space and logic wherein many curious beasties and a few human weirdoes lived their freakish lives.

As I've pointed out before, this poem we call the Snark is the only Victorian verse epic (or epyllion) that has withstood the test of time. As such, it is a direct descendant of such literary blockbusters as the Iliad and the Odyssey and we all know what that means … for example, the famous device of the Homeric epithet — rosy-fingered Dawn or sticky-fingered Odysseus — has been handily transmogrified by the Admirable Carroll into the Carrollian epithet.

We can see two of them in the above stanzel (stanza+panel). One of them is Thingumbob, a Carrollian epithet which the Baker gladly accepts for the simple fact that he had forgotten his own name, way back in Fit the Second. (Need we mention, parenthetically of course, that this amnesia is a sly exegesis upon the Adamic Nominative Imperative that is made so much of in the Book of Genesis? I thought so.)

Another Second Fit epithet for the Baker is Candle-ends, an epithet which I'm sure all of my readers will instantly remember as being the English equivalent of the Chinese ideogram known as "xié", ie. candle-stub.


The "xié" ideogram has been liberally sprinkled about this stanzel to reinforce this Sino-Carrollian epithet, an epithet which curiously enough was also the nickname of one of Carroll's best friends, the charming Alexandra "Xie" Kitchin. We see her here in a photograph of Carroll's, a photo in which she plays the role of a rather diffident Chinese tea merchant. 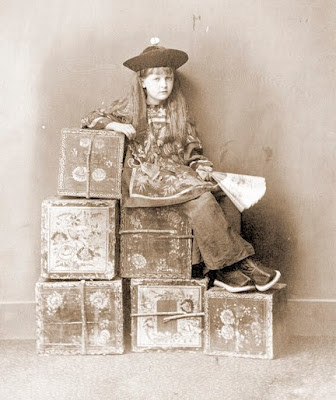 Naturally, all this Carrollian epithetting cannot hold a candlestub to that Greek guy Homer's epithetting but on the other hand, the Carrollian Multiverse is not one of the world's top importers of Porsche sports cars and is in no need of a Eurozone bail-out. Who's talking Nonsense now, eh?

NB. I'll be signing copies of my Snark and also participating in the Poetry and Visual Arts Roundtable, February 17, 2012, 2 - 4 p.m. at the Lillian Vernon Creative Writers House, 58 West 10th Street, between 5th and 6th Avenues, NYC. This will provide a rare opportunity for myself to leave the house without being pelted with freezing rain, snow, ice and poutine … featured poets will also include Sommer Browning, Matthea Harvey, Mark Leidner, Bianca Stone, and Paul Tunis. More info here …
Posted by Mahendra Singh at 6:00 AM No comments: 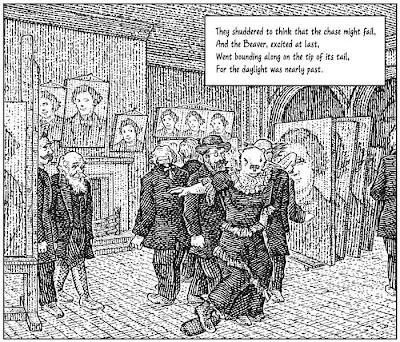 Our Snark hunt has entered the ultimate phase of its prosodic peristalsis, the infamous Fit the Eight, the Vanishing.

Big paradox, huh? The final product of the greatest Nonsense Epic Ever Written will be the Nothingness of being Vanished Away. That's pretty Heavy, so Heavy that it's plunged all the way to Light 'n Trivial.

Which brings us to another textual dilemma: from whence comes this sudden penchant for capitalizing things? Is it a suppressed orthographic memory of this artist's oddly Teutonic heritage? A sticky caps key? Or is it just another haphazard attempt at maintaining the pretense of Deep Meaning without actually doing anything about it?

Smarty-pants readers will sneer at this back-handed attempt at defining Carrollian Nonsense, they will scoff derisively at all this muddling of Form and Meaning. Less intelligently clothed readers can gape, slack jawed, at the above drawing which illustrates a band of Snarquistadores wandering through a room which is lavishly adorned with portraits of their communal Creator, the Admirable Carroll — and their soon-to-be-vanished colleague, the Baker!

Muddling through a hagiographic tribute to one's creator (a self-generating universal mono-iconostasis if you're a particularly old-fashioned Hindu) is pretty much shorthand for life itself if one happens to be religious. The frisson of it all is made even more frissony by the fact that this particular creator, the Rev. C.L. Dodgson, was a genuinely religious man who puttered around his own creator's world in the mad gardener's guise of Lewis Carroll.

It all means something and I'm sure it's pretty amazing and really cool if I could only think of what to call it* … which is, of course, the Illustrator's Primal Dilemma: I cannot say it, I can only draw it. Like the Beaver, I keep bounding along on the tip of my tale, at a loss for words but well-stocked with pictures.

NB. I'll be appearing at the Poetry and Visual Arts Roundtable, February 17, 2012, 2 - 4 p.m. at the Lillian Vernon Creative Writers House, 58 West 10th Street, between 5th and 6th Avenues, NYC. This will provide a rare opportunity for myself to publicly rant about comix and poetry with other ranters in a location that is nominally warmer than the one I rant in now … featured poets will also include Sommer Browning, Matthea Harvey, Mark Leidner, Bianca Stone, and Paul Tunis. More info here …
____________________________________